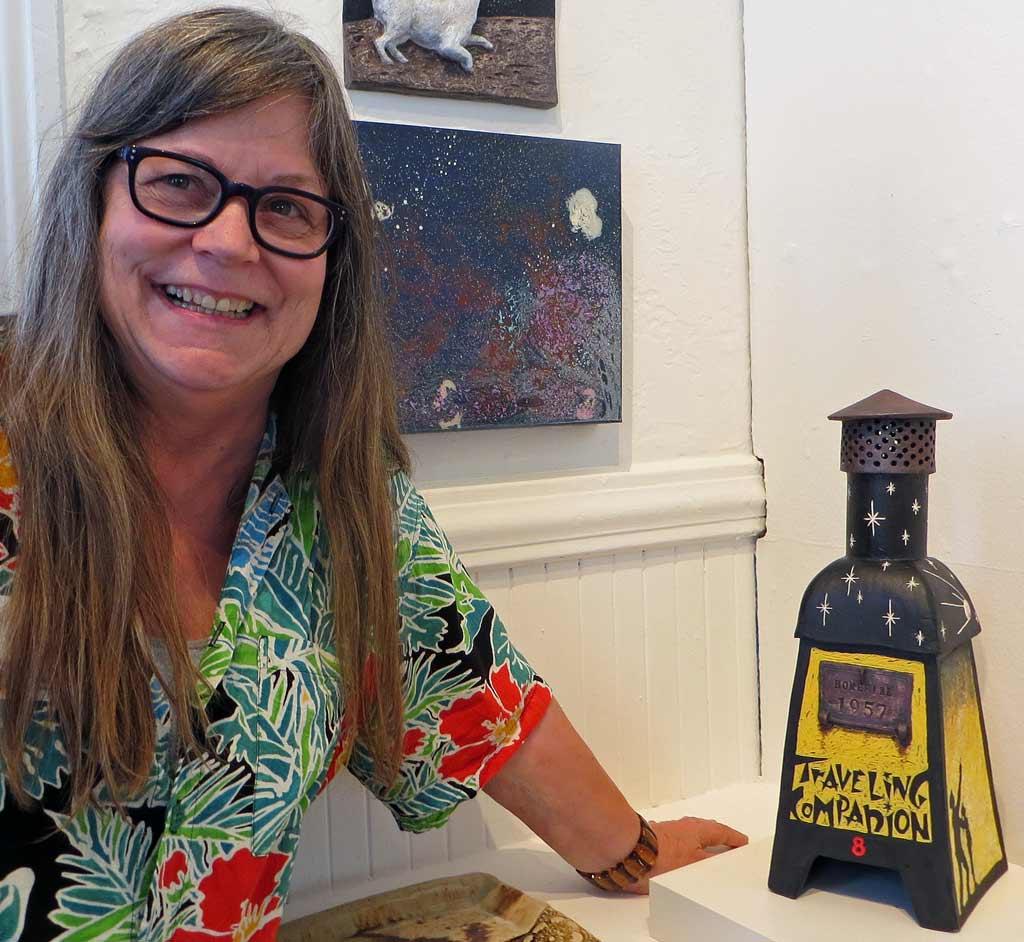 I have kvetched about attending art receptions on these pages before. They are a regular occurrence in my world, though, and I have longed for a way to feel more comfortable about them. I have gone early and left early, gone late and left early, gone late and stayed to help with clean-up, volunteered to greet or serve, and even brazenly – or more commonly, guiltily – skipped them. Nothing satisfied.

END_OF_DOCUMENT_TOKEN_TO_BE_REPLACED 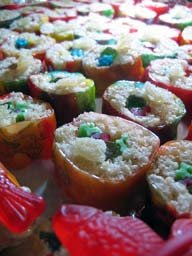 I popped into the newly opened “Rare Earth: National Ceramics Exhibition” currently open in the Cabrillo Gallery in Aptos today. And I got wowed! Without a lot of interpretive yak, I thought to simply share with you a smidge what I saw that was new and exciting. And I do mean smidge as there are another few visits-worth needed in order to let the great range of work percolate through.

END_OF_DOCUMENT_TOKEN_TO_BE_REPLACED 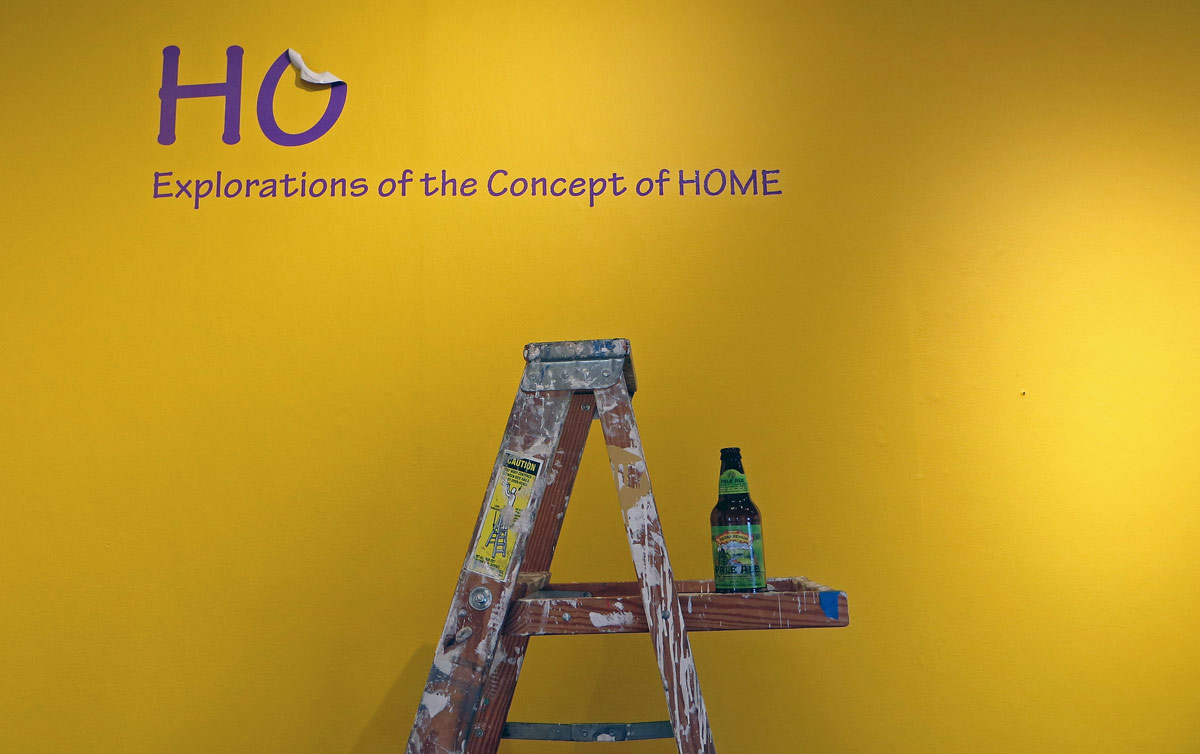 The HOME Exhibit at the Pajaro Valley Arts Gallery just closed. Everybody’s pieces are going home – some to new ones. I have written about this exhibit for the past six weeks: the drop-off, its reception, three of the most compelling pieces in it, and my artwork in depth. (All the links you need are below.) We will close this Summer Blog-a-thon too, with a tiny glimpse of striking the set and beginning the new production. Over is OVER, as the deconstructed title wall serendipitously demonstrated when I showed up to get my piece.

END_OF_DOCUMENT_TOKEN_TO_BE_REPLACED

Oh, my, such a lot to explore here, but I will try hard to stick to my major idea: For me the idea of being a Social Artist who Markets Her Work means attempting to be a living oxymoron. I just don’t resonate with it.

Or didn’t. Or I’m a work in progress, learning to live the BOTH/AND instead of the EITHER/OR. Nowadays I find it interesting to ‘put on my Big Girl Panties’ [my new favorite saying from this summer] and get myself out there, even if I concurrently break out in metaphorical hives.

This unnatural, learned behavior was hatched in October 2008 when I ran across Alyson Stanfield’s Art Biz Coach site and book, I’d Rather Be In the Studio! The Artist’s No-Excuse Guide to Self-Promotion.

Fast forward to the present, having collected Alyson’s wisdom through her book, artbizconnectionsalon, online classes, blog and website, phone sessions and even a couple of live workshops she happened to conduct in Northern CA (lucky me!) I – who couldn’t make an attachment to an e-mail back then – now find myself blogging, chatting, friending, following, tweeting, linking, posting, commenting, messaging, convo-ing, listing and re-listing IN ADDITION to making art and more art, entering exhibits, opening my studio, contacting galleries, joining art associations, attending receptions, and in general authentically livin’ the dream I dreamed my whole adult life. The mysterious other things that artists do out in the Art World have been revealed…they are just not exactly what I thought they would be and I am learning to pick and choose.

The Isolationist INTJ me still gets plenty of solace and creative communing one-on-one with my Muses, of that I make sure. But I have come of artistic age in a new time when the gallery walls are transparent, the artist’s rep looks a lot like me and I have the virtual means with which to share my artistic entirety – images, words and connections – in a way that strangely suits me.

There are no longer Gatekeepers: we know our fans and collectors and they know us. We expect it. Though I sit here and you there, you, dear Reader, are a real person! You can talk back to me, you can tell others, and so it goes virally along.

Being a Social Artist, even one who Markets (read: SHARES, and thanks, Alyson,) isn’t quite the oxymoronic existence I once felt it to be, and even if I have my reluctant moments, I have definitely learned how rewarding it is dive in the pool and play. 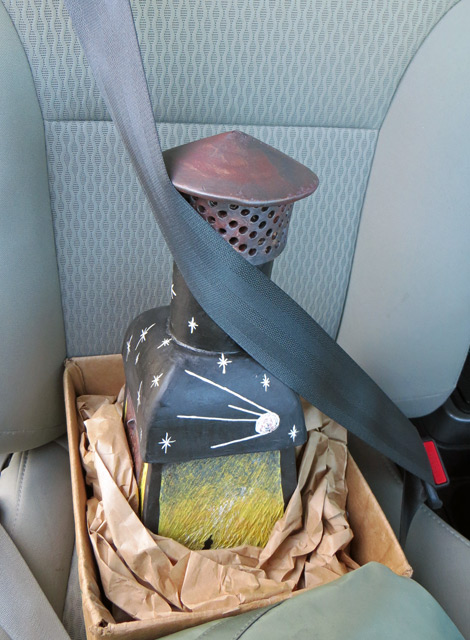 The HOME Exhibit at the Pajaro Valley Arts Gallery has closed. After almost seven weeks away,  my “Homefire 1957” incinerator piece is coming home.

When it’s in transit, I have learned to handle my work myself whenever possible. (Here’s one sad, sad example of why.) I figure if I break it, I am pre-forgiven. Others, they feel terrible all by themselves and I can’t assuage it! Consequently, I am glad for any nearby opportunities to show my stuff because I can deliver and pick up in person. If I have a driver, I hold pieces on my lap, but when I drive, I need to either fully pad and pack pieces in a lidded container or buckle them in thusly.

END_OF_DOCUMENT_TOKEN_TO_BE_REPLACED 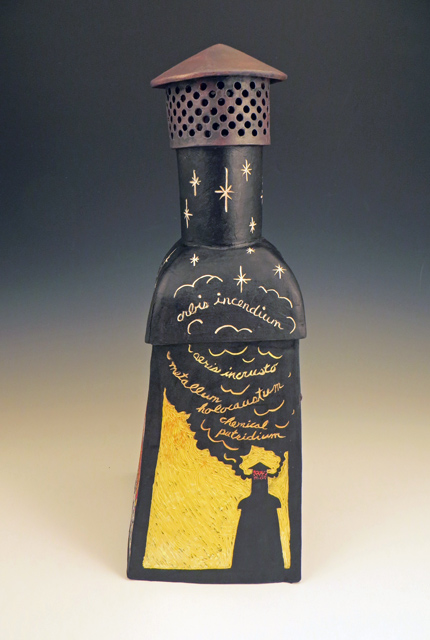 After one gets over the news that it smells bad, it looks like the odor of Outer Space is hard to pin down. It’s reportedly a bit like burnt metal, welding fumes and seared steak. Acrid but slightly sweet; sulphurous and undeniable. The astronauts’ suits and gear, upon returning from space walks, stunk like they’d been camping at a celestial tire fire. It was such an unlikely surprise.

But at one time so was the discovery that smoke from earthly tire fires, oil refineries, automobiles and backyard incinerators probably was to blame for the continually bad air.