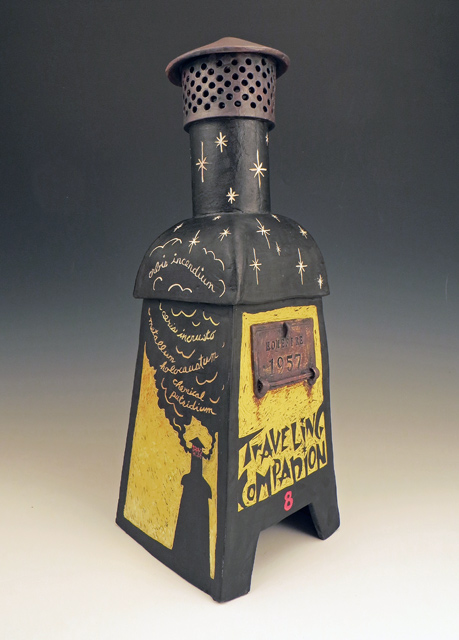 So, there’s this: A ceramic incinerator sculpture that I ended up calling “Homefire 1957.” Other than perhaps a bomb shelter sculpture to exorcise my childhood’s deep fear of being annihilated in a nuclear war, nothing else quite portrays what was happening in my domestic and cosmic home at that time more than this piece. Yeah, it’s autobiographical.

My working title for it was “Between Two Fires” because stuck tensions abound here. It also might have been called “Traveling Companion” but that’s only part of the story. So “Homefire 1957” it is: echoes of Place and Time. It’s made from memories plaited together in hindsight. Of the Place it reflects – Van Nuys, San Fernando Valley, Los Angeles County – I only knew the smaller realm of my family, neighborhood and school and have learned the rest. Of the Time – first week of October, 1957 – I was too young to understand it and was more rightfully concerned with the future: my upcoming birthday on the 6th. It was indeed an important week!

Let’s start with what it is: a small version of a concrete backyard incinerator. You may not have heard of one, as they pretty much existed nowhere else in the US and have been gone 60 years, yet at one time nearly every home in that huge county had one. There was no garbage pick-up – you burned it or carted it to the dump yourself. The unbreathable smoggy air wasn’t new – in 1542 the Spanish explorer Cabrillo called the area “Bay of Smokes” – but 20th century industrialization, population explosion and automobile exhaust exacerbated natural climatic tendencies. So did burning All the Trash. But in a coup for the nascent clean air movement, on October 1, 1957 backyard trash burning was outlawed and the incinerators went away. And, sadly, I lost my special backyard buddy whose blocky anthropomorphic form and fire in the belly not only charmed me, but let me burn things up every day, not just on the Fourth of July.

The other event that first week of October, 1957 changed the world. On October 4 the Soviet Union launched Sputnik 1, the first artificial Earth satellite. The press called it a manmade moon and aired its taunting radio signals. It orbited the earth every 96 minutes and flew so low it could easily be seen from dusk to dawn, a tiny speedster. It certainly cranked up the Space Race, another facet of the Cold War, giving my sensitive mind another reason to worry at night. And it ensured my Aerospace Engineer Dad’s employment making space wartoys until he died too young from the incredible stress of it twenty years later.

Here’s the other two sides of the piece. 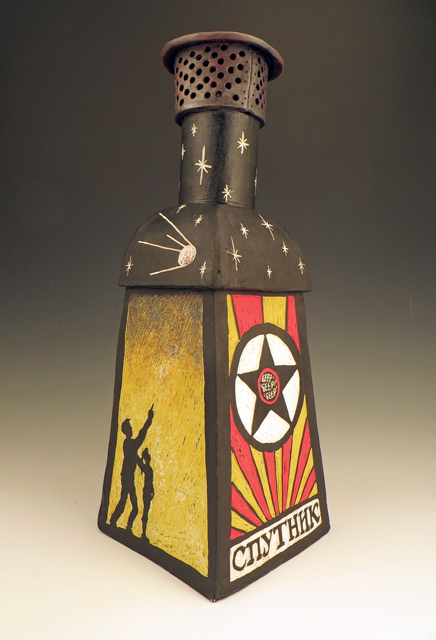 So the idea here is that this is the first of several journal entries. It represents a new direction for my ceramic work. I will be taking it as a whole and also by each side, describing the imagery, the techniques, the personal interconnections of content in conjunction with it being on display in the “HOME” exhibit at the Pajaro Valley Arts Gallery. I plan to link entries together as I write them, so readers can jump in anywhere.

–Liz Crain, who has made exactly one other incinerator sculpture and wrote about it several years ago when it was new and again recently when she repaired the broken top piece for its owner.

2 thoughts on “Between Two Fires”