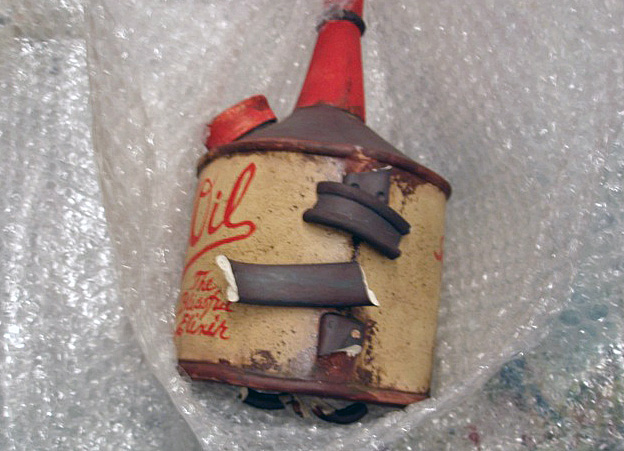 Smaragos is one of the five Greek Gods of Pottery, the Daimones Keramikoi. It appears they are all wrathful and need constant appeasement. Smaragos is The Smasher. As in demonically smashed, crashed, dropped and probably lobbed. In these modern times he moonlights at UPS.

I entered a Fabulous Juried-by-Big-Names International Ceramics Exhibit called America’s Clayfest IV. Glory be, one piece was accepted! A chance for my work to hang out with the Cool Kids.

When it was time to ship, I took my piece to be professionally wrapped and double-boxed with all the requisite paperwork and return-shipping, etc. I lightly kissed it goodbye and told it to travel well, thinking I might never see it again. It stood a chance of selling, after all, and going home with a collector.  It was packed with expertise and love, of that I feel sure, having talked at length beforehand with the young woman who would do the work. It was sent overnight on a Wednesday.

The Monday following its tracked arrival, The Gallery began to open the 60 or so boxes of work and set the show. They heard ominous clinking noises from mine even before they removed all the padding and bubble wrap. They knew what to do and grabbed the camera to document. That’s one shot you see in the top photo and I thank them for all of them. They knew to save the packing materials as well.

It was the sweet and proud handle, broken in five places.

Their phone call was kind, but nevertheless unreal. My hopes to proudly represent were smashed along with the piece.

The Five Stages of Grief

Stage 1: Shock. Denial. Shame. Isolation. I couldn’t talk about it to anyone for three whole days, which is completely out of character for me because I find out what I think and feel when I hash it out with trusted others.

Stage 2: Anger. Blame. Strangely, I did not spend much time here. “Shit Happens” and “IOFC” (it’s only f-ing clay) quickly rushed in when my mind tried to find a scapegoat. There was none. Well, there was one: that shifty no-good bastard Smaragos, who remained unreachable.

Stage 3: Bargaining. Turns out not much was needed. The gallery folks – who were compassionate and had seen this before – repaired the handle and put the piece in the show. I expect it was in a dimly lit, out-of-the-way corner, but it was still there. It was in the catalog, after all. My local UPS Office quickly set up a claim for me, intending to get me a full settlement. No need to haggle, really.

Stage 4: Depression. OK, I did get down about the losses. Not just my lost opportunity for fame and fortune, but the ripple-effect from that for others. Ultimately the Gallery lost time and money, the Show was reduced ever so from what the jurors intended,  visitors were distracted by seeing the repair instead of the piece,  and the local UPS office – especially the young woman who packed it – was devastated. UPS lost and had to “buy” my art. The piece and its packaging might be useful for training, but more likely will just go to the landfill. We all lost.

Stage 5: Acceptance. Assimilation. So, yeah. That happened. I get a blog post out of it and a story to tell forever. I will ship my pieces with double-extra super-duper care and explain that to whomever I hire from now on. I will also have to enter America’s Clayfest annually until accepted again to try to make it right in my heart.

–Liz Crain, who has a family friend who is a UPS manager in Texas. He says packages in their transit facilities fly around on – and all-too-commonly off of – speeding conveyor belts they have nicknamed “lawn mowers.” Smaragos, as tired and mean as he must have been that night, had help.