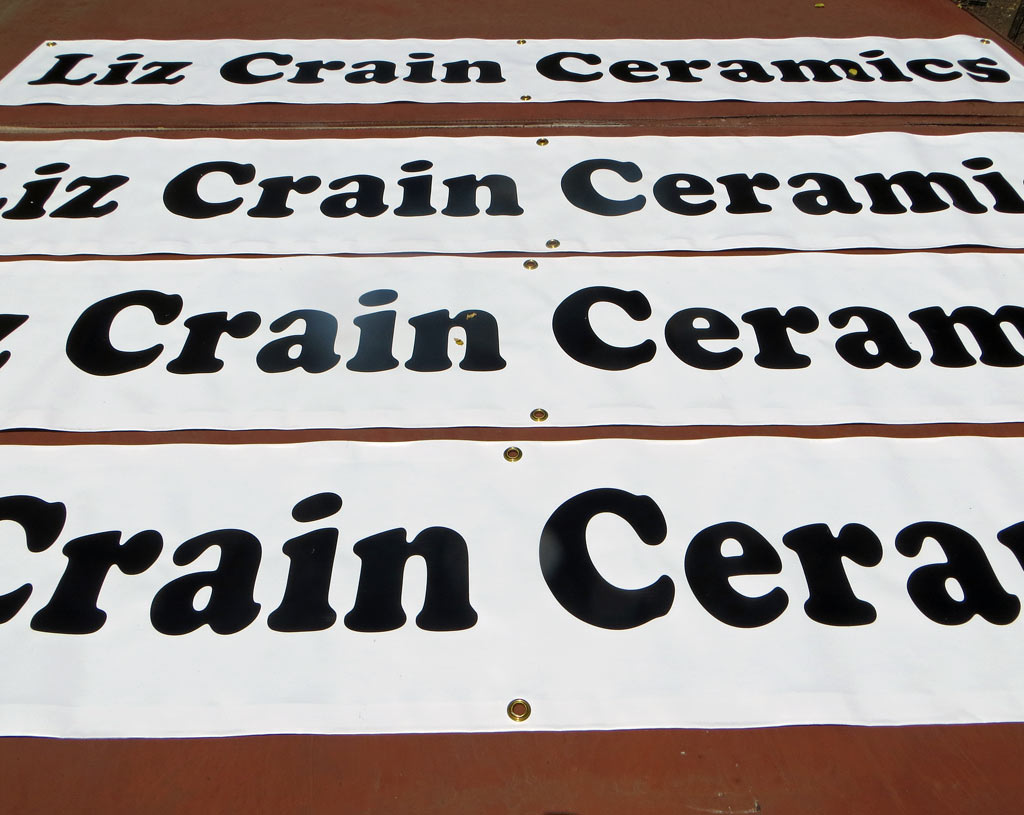 By the time you read this I will be one or less days away from my only major in-person show this year: the annual ACGA Palo Alto Clay and Glass Festival. There’s an unholy amount of prepping to do to ensure I represent myself well in a constrained 10′ x 10′  setting.  Add to that the fact that I haven’t been able to do this show since 2015 and have both cream-of-the-crop older and brash hot-out-of-the-kiln work to share.  Still, after five times, I know my drill and the Festival itself is fantastically organized, so it will all happen as it should.

After the art was finished and curated, I got curious to photo-document the maelstrom created by the show preparations. It matters that it’s done at a measured and sane pace because it’s absolutely the optimum way I support my exhibitorship in advance. The photographing, the pricing, the list-checking, the rounding-up of all the booth and display parts, the packing, the snacks and the changes of shoes all count. So, with only a few days to go as I write, here’s an annotated behind the scenes photo essay for you. Let’s start with the uncurling of the brand new but long-stored booth banners relaxing in the sun on the hot tub cover, looking like the Star Wars opening crawl — if it were done in classic Cooper Black  (a typeface “for far-sighted printers with near-sighted customers.”)

END_OF_DOCUMENT_TOKEN_TO_BE_REPLACED

On a recent July weekend, I packed my artwork along with the shelter and accessories needed to create an event booth,  and got over to the Palo Alto Art Center for the annual ACGA Clay and Glass Festival.

Me: Artist #17 in a brilliantly located and lightly shaded spot along one of the main lanes, one of nearly 160 others.

Them: The collectors, students and assorted aficionados arriving in nice steady streams all day both days, the weather in the high 70s with a light breeze.

Here are some Tales:

Rusty McBucket – I taught Beginning Ceramics to Joanie K. at the Santa Cruz Mountains Art Center for precisely twelve weeks over a year ago.  She was on fire for clay in a way I recognized….reading everything in sight, buying nifty tools, signing up for Every. Single. Ceramics Opportunity. She still is. Joanie came by my booth with a small treasure she had collected for me many months before. On a beach in Ireland – Balbriggan to be exact – she encountered an incredible piece of romantically rusted metal and brought it home. She lovingly watched me unwrap it from its long travels. I was astounded and consider it a work of art in its own right.  If only rust could talk. 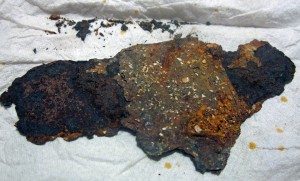 The Sounds of The Silencer –  My conetop beer and soda cans are usually prominently displayed in the front of my booth. That way they constantly provoke curiosity and comment. (One visitor this year even sort of yelled at me when I explained that everything she was looking at was 100% ceramic. “Get OUT!!!!” she exclaimed… and I took it as a compliment.) In an afternoon lull, a pensive younger man was enjoying and picking up many of the cans. After a bit of time, he looked up at me and I mentioned to him some feature or benefit, I can’t quite recall. He smiled and then gestured that he could not hear and could not speak. But he still wanted to ask me something. I don’t know why I kept talking as I was finding some paper and pen, but he was quicker. Out came a letter to explain his admiration which was also a request to donate to his organization, of which he was the President: The Association of Parents, Teachers and Counselors (APTC) at California School for the Deaf in Fremont for their first annual “Sip, Savor & Support” fundraiser to be held in San Francisco this November. In an instinctive move, I nodded my head and plucked the donation paperwork out of his hands, indicating YES!  I will be sending him and the APTC  the shot-up beer can he favored, The Silencer. Gives me chills. 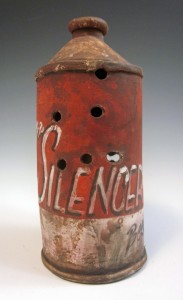 Breakage – Nothing was broken outright during the Festival, but I have to admit to a learned apprehension when folks innocently mis-handle my work. It’s not particularly delicate, any more, as I’ve learned to bolster clay’s weaknesses when being made to look like metal. But, it’s still ceramic and not metal and the fool-the-eye aspects quite often fool the handler so well that… You can read about how I learned this lesson the hard way  in “Hey This Handle’s Stuck.” No matter what I do – and I use Quake Hold on every lid and even “Hi I’m Not a Real Handle” hangtags on the sculptural affairs –  there are folks who just Go There: twisting and turning, bumping and grinding, tipping and toppling. It was enough that last May a wind gust luffed my booth sidewall and tumbled some heavier pieces down onto the handles of my pitchers and watering cans, ultimately taking out four of them. I discovered the last one’s subtle but fatal crack during this Festival and set it aside. Disheartening. So when someone comes along and grasps, flips or clunks a tad too offhandedly, I break out in hives. Hey, they’re vessels but not crockery!

Not that Cool Chick – OK this one stung. But I think it’s also hilarious.  So here goes: When I had stepped away from my booth for less than ten minutes, a quirky guy swooped in and asked my husband, “Hey! Where’s that Cool Chick? The one that makes all these?! I talked to her before. She’s SO COOL!”   He was still there poking around when I returned.  Now, when you are in the middle of a Clay and Glass Festival, you talk to all comers, and while most are delightful, there are some who merely pass for rational. With animated bullshit he proceeded to philosophize and elucidate. (It’s hard to get out of a buttonholer’s grasp when no-one else is coming around and you’ve just returned from a break.) He pontificated about What is Art and why he wouldn’t buy the “lonely” work in the booth directly across from me, but he would buy mine – which unsurprisingly he made no move to do. With another dollop of social cluelessness – possibly tinged with the bluntness of Asperger’s –  he also said, “Last year I couldn’t believe what a Cool Chick you were, but right now, you’ve just got a Mom Vibe.”  Must be my feet of clay.  I excused myself and got out of the Maggie May morning sun,

The Trading Agent – Turns out the kid has been coming to art festivals since he was nine-months old, but I didn’t know that. He looked to be somewhere around 12 and had visited my booth at least twice, digging on the shot-up beer cans each time, all smiles. His enthusiasm was guilelessly genuine and when I remembered I had a stash of animal cracker pins with me, I offered him a choice of one. He took a tiger. Soon he came back – tiger pinned to his shirt – with his dad, who, as it turns out, was another festival artist. And we spoke of working out a trade to foster Ethan’s budding ceramics collection. I said I would come look when things wrapped for the day.  Before then, Ethan returned once more, this time with his mom, to cement the plan. Way to work the  ‘rents, kid! I asked what he was really interested in and when I walked over to the booth of Gerald Arrington, I carried those pieces with me. I’m enamored of how this trade transpired. I met a wonderful family and we both left the festival with treasures. Here’s mine, a very Zen-like indented thrown sphere, complete with hand-applied striations and an engaging rough/smooth surface. I love rocks and Gerry’s are perfection: 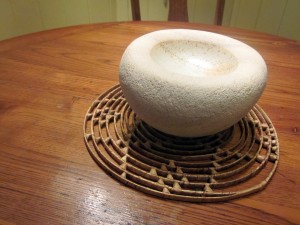 Unexpected Invitations If I don’t leave my studio and go where the enthusiasts are, I’ll likely never meet them…and they me! A premium quality festival like this affords premium opportunities, but they are still mostly related to chance. After two such serendipitous encounters, I am still shaking off the elated wonderment like a Golden Retriever after a swim in the pond. I will be acting upon them soon.

Derik Van Beers, whose work I’ve appreciated in the past at the Ceramics Annual of America, walked by, introduced himself and we talked a bit about his Roscoe Ceramic Gallery in Oakland, where he felt my beer cans would be a big hit in his front display cases. YES!!!!!  He later returned and bought one and then showed it round the Festival. I just need to box a variety of them up and get there on a Saturday afternoon sometime soon. In my personal campaign to blanket the SF Bay Area with my ceramic cans, I’m tiptoeing up on the East Bay.

And if that was not enough wonder, right after Derik departed,  here stood an open-eyed and lovely couple, speaking enthusiastically of their love of all kinds of teapots and how they collect them and, by the way,  they have this museum to house them all. A tiny flicker went off in my brain… might this be…? They continued with how they enjoyed my work, saw some of my larger gas cans as teapots (requisite spout/lid/handle/body) and wondered if,  when I made more,  since they didn’t quite see The One right then, would I be so kind as to email them some photos? And, oh, since they “get a lot of emails” if I don’t get a reply to just continue sending.  At that point he handed me his card with the email address, and yup, it was Sonny and Gloria Kamm of the Kamm Teapot Foundation. To be honest, the sculptural teapot tradition is SO strong and well done, I’ve never felt like a candidate, but if Gloria and Sonny say so….

–Liz Crain, who took a week and a half to absorb these Tales and balance them against the fact that she very nearly cancelled on this Festival this year – twice. Yes, there were extenuating circumstances she could point to, but at root was the fear of not being All That – The Cool Chick – and she managed to talk herself away from the ledge by getting her Inner Critic Scylla to agree to show up this one time as A Good Enough Artist. She’s happy to relate that she felt like her most genuine artist-self the entire time.