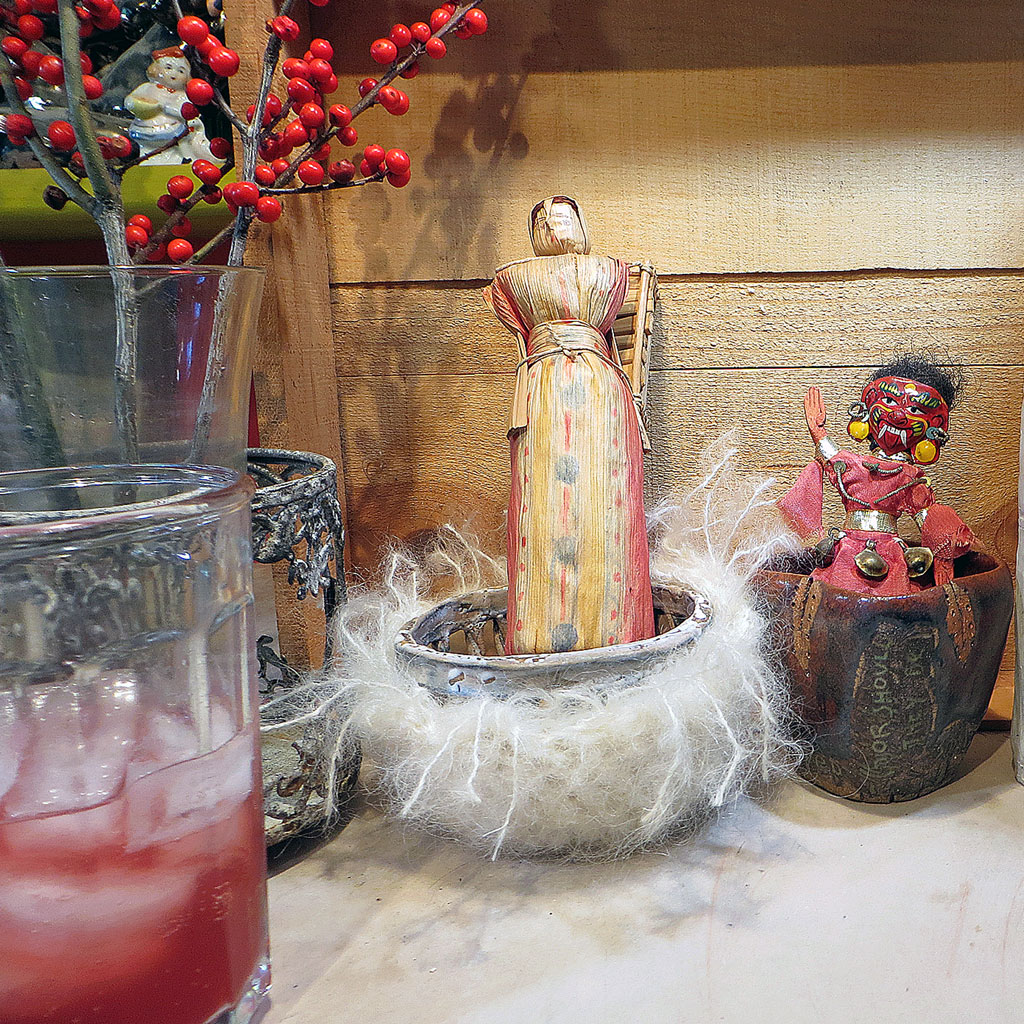 Each year I do a short unstructured ceremony in my studio to review the year and reset my sails for the next year. Most years I assemble the work table altar items with care over the week preceding my session: flowers, candles, music, and aromatics join meaningful pieces, well-considered written summations and questions, paper for note-making. This year was different: I needed to not just record, but to JOLT things, so I began calling the event an Intervention. To support that idea, I roughed out a space in the over-crowded studio for just a scant few basics and went to find the recipe for the Nasty Woman Cocktail, a leftover from a former time of optimism.

Not sure who gets the credit for the Nasty Woman as there are several versions. Here’s the one I prefer:

Stir together the Tequila, Cherry Juice and Lime Juice and pour over a glass of ice, about 2/3 full. (You can premix this in a pitcher for a crowd…) Top off each glass with the sparkling wine to your liking. Add lime wedge or twist. Cheers.

As far as I was concerned, the whole Intervention could have consisted of making and sipping this cocktail and penning the musings that came up. I was willing to let the thing take its own course, figuring that Crazy Wisdom would prove a better guide than my forebrain.

The Women Who Showed Up

Yet, yet, I was still drawn to assemble tokens of meaning to thank formally, or to challenge me. I didn’t want to overthink it, so in the days beforehand, I just plucked pieces that seemed suited to the occasion and started putting them in front of a shallow wooden box turned on end for a backdrop. I found finished work, parts and pieces of incipient works, and invited a few Muses I keep close: Wonder Woman, Isadora Duncan, a Daruma Doll to start.

Eventually these were joined by the Corn Doll, the Fierce Mask Woman and a Made In Occupied Japan figurine of a girl feeding a duck that was given to me by a second-grade swain. The whole pantheon of #metoo, by coincidence.

I sipped and wrote and wrote and sipped for a whole hour. I retired some pieces, added others (much like Sandplay Therapy) letting the intuitive impulse take the lead. At one point I opened the large ball of clay and spent a bit of time walking around and forming it, as a meditational interlude.

Snippets of What I Wrote

“I toast the messy, sideswiping, prickly, exhausting past year.”

“The woman I am is the artist I am. There is no difference.” (Isadora Duncan quote.)

“Some things just can’t be fixed. (Nor should they be.)” (I had inscribed this on a small pot which is about cracking clay and separating teenagers.)

“Shut Up and Row” (First heard from my mom.)

“Clay heals. No Method, no Guru.” (Riffing off of Van Morrison.)

“Next year: technical” (Not sure what this means now.)

Interestingly, my walking pinch pot meditation led me past my tiny face jug based on Alice the Goon. Now Alice, even though she is a 20th Century cartoon invention, hearkens from the most primitive of my Muses, pre-dating even the Paleolithic Venuses. Alice is 8 feet tall, bald, has no visible mouth, a huge long nose and a hairy body. She’s all feelings and actions. Her speech bubbles are filled with squiggles, a language only Wimpy (!) understands. Alice has a gentle, maternal, animal-like nature, both amusing and appealing. I am safe with strangely wise Alice. 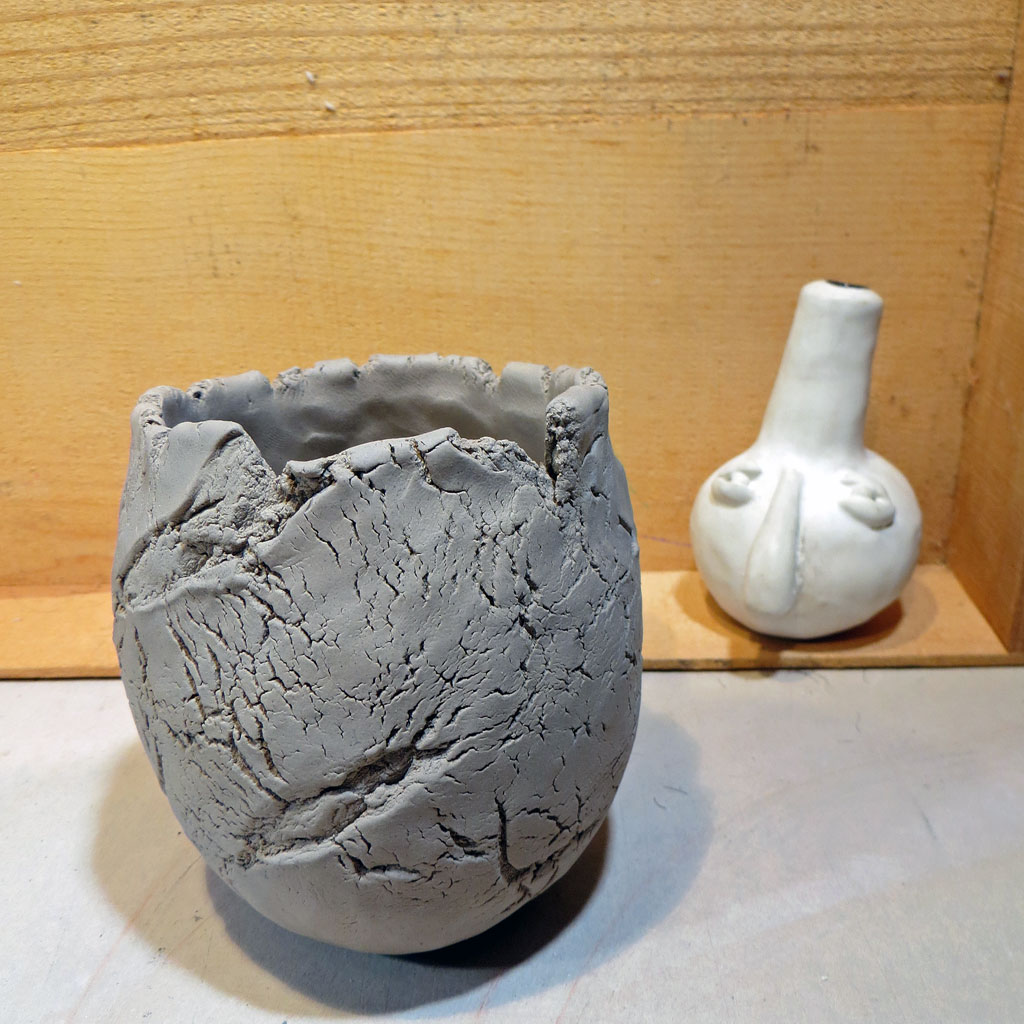 So that’s where we leave it: the most primal clay vessel formed on the fly and a muse-fetish piece that evokes a return to the reassuring bedrock of simplicity.

I sensed completion and took the last sips of my now-watery cocktail. I blew out the candle and left it all in place to soak in.

Funny, but I never got around to writing anything down. I have no list of Actionables where all the items begin with verbs. No Yearly Campaign. No Month-by-Month Game Plan. My rough, but heartfelt, plan is to cultivate the basics, using them as wellsprings and springboards. My intention is to pay attention to the clay in front of me. My desire is to seek Wonder, Meaning, Loveliness and Amusement in the most expressive ways that fit this woman-artist right now. I will definitely Go Ask Alice when I get stuck.

–Liz Crain, who thought last year’s Studio Review and Rededication was a doozy, and it was, but THIS year’s Intervention broke all the records for the unexpected and delightful, as well as the lasting truth. And on that high, she steps away from the Studio Journal until mid-January 2018. Good tidings for our next circle round!

6 thoughts on “The Nasty Woman Studio Intervention and Rehab Plan”