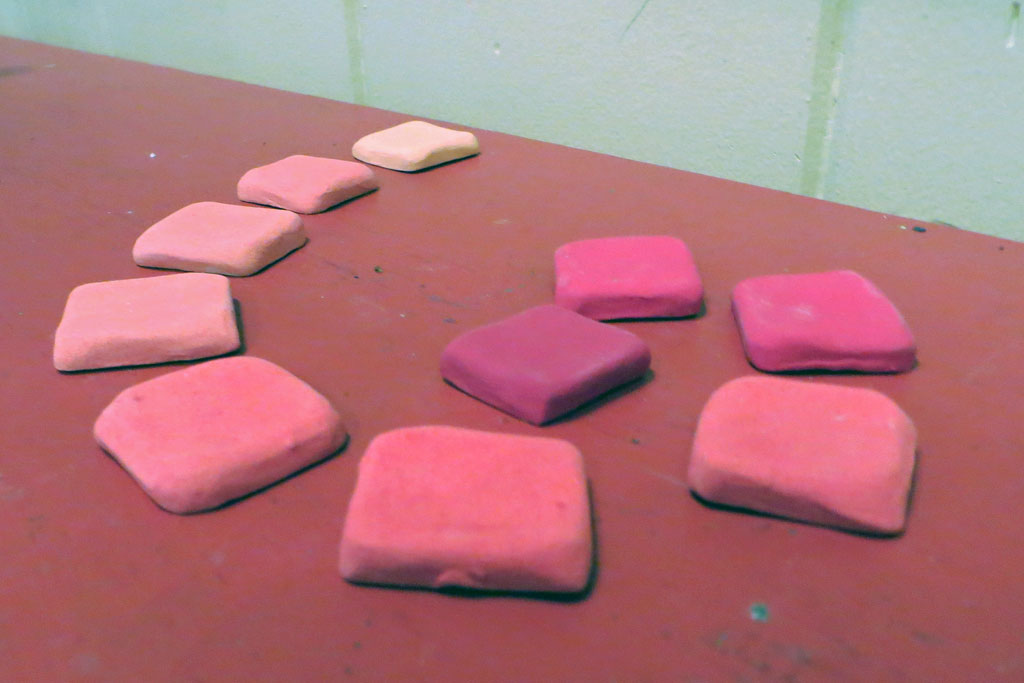 Clay work as I experience it is unforgivingly slow-going. Asking clay to do the wrong things at the wrong state of wetness doesn’t yield desired results. Rushing claywares to dry invites problems the whole rest of the way. Bumping a bone dry piece can see it revert to dusty chunks. Not wiping bisqueware off before glazing it is just asking for glaze burbles. We won’t even speak of all the ways an inattentive firing can ruin entire loads of works, regardless of whether they were circumspectly made and decorated or not. I say clay taught me patience. Now I wonder if I learned that lesson a little too well. I’m certain that I make clay work even slower in at least ten ways. Let’s count them out.

Way ONE: I handbuild. I drop my jaw at Instagram shots of some wheel-throwing potter’s day’s output of 200 mugs. I. just. can’t. even. I could maybe make 20 mugs in a day if I had to, and I would hate it the whole time.  And I would wonder about the quantity/quality thing. Not only of the work, but of the experience.  My temperament determines my methodology and even when I’m most efficient, it’s slow-going.

Way TWO: I decorate my work by hand with a brush. Underglazes and glazes generally require three coats, dried between each one. That precludes the single spontaneous gesture and instead fosters focused control, if not an unwelcome rigidity. There are exceptions to everything, but brush-applied clay decoration isn’t dunk and run. It’s methodically slow, even if it appears to be loose. It can hurt my neck.

Way THREE: I’m inordinately fond of Ideation. Conceptualizing new works and series is SO much more gratifying than bringing them into material existence. Fantasies are perfect by nature and they are already completely done. I have heard this said about a writer, but it’s true for me as well: “He doesn’t want to write. He wants to have written.” That said, I spend a lot of pleasant time letting ideas lead to even more delicious ideas and I know the work I actually wind up making is better for that.

Way FOUR: I test. And test. And test again. After Ideation, I’m obsessed with the low risk practice of making test tiles and maquettes. Whatever results I get from them are valid, after all, and I’m completely removed from any pressure to have a finished product other than a test result.  It seemingly can take up a lot more time, but I know from sad experience that if I just jump into my Big Idea without this research it will soon reflect all the ways it can go wrong and I will just have to start over.

Way FIVE: I work sloppy. After 20 years of practice, I can’t roll a consistently even slab of clay, even with gauge sticks. I can’t cut straight lines, even with a scalpel and a stiff pattern. I don’t naturally achieve levelness at top or bottom. My hands introduce funky wobbles and bobbles, cracks, wonks and warping when I form things which, try as I might, I won’t see until the pieces are fired. I might not wash my work surfaces, brushes and tools often or well, either. It means that in order to keep my natural sloppy tendencies in check, I must constantly make the extra rounds to clean up my handling and process.

Way SIX: I cull, rework and refire. For all the sloppiness I deal with in the making, in the end my standards for acceptable, marketable work are quite high. Another potter once suggested I was being too hard on myself by calling some cosmetically cracked and invisibly repaired works “Seconds.” Well, I still think he was wrong! In my studio, away go the unsavable unsatisfactories to the shard pile. The rest might get some retooling, retouching, re-inventing, re-stating, re-levelling, re-firing.

Way SEVEN: I doubt, dither and dance away. Truth be told, I often loathe my work after I have brought it to completion and presented it to the world. I know I can’t ever “see” it as others see it and so I don’t try to. And I don’t dwell on or freely mention my doubts, either, because I get welcome oxygen from the world’s enthusiasm. I really don’t believe my loathing, but see it as part of a my creative process sequence: a distancing which frees me to move onto the next thing. It’s also very common for me to return to a former way of working, seeing the older work with new eyes and morphing it.

Way EIGHT: I get bored of repetition and sameness. I wonder how other ceramicists continue with the same styles and lines of work for years and decades. Is it too safe and lucrative? Have they painted themselves into a market niche corner? Are they still thrilled and fulfilled or just out of juicy new directions? Are they hesitant to have to start over, re-tool and re-explain themselves? Or is it me? Have I just not found that certain something which utterly rivets me? I can’t speak for others but I know I must assuage my boredom and honor my powerful urge to keep learning, even if it means lots of wandering.

Way NINE: I now admit artful non-ceramic materials into my projects. I used to be a ceramic purist: nothing but traditional fired clays and surfaces. Over the past year or so, I have included cold finishes such as archival pens and pencils, inks, metallic waxes, and other non-ceramic additions. I have tubs of glass, metal, wood, fabric, yarn and string, paper ephemera, leather, and interesting odd bits to incorporate into the work. Case in point: this tableful of thrift store found objects, currently the starting places for ceramic responses or combinations, often more sculptural. It makes the going even slower as I play around with what fits together and how to attach parts elegantly, but it’s the fascinating edge of my artistic stretch and exactly where I need to be. 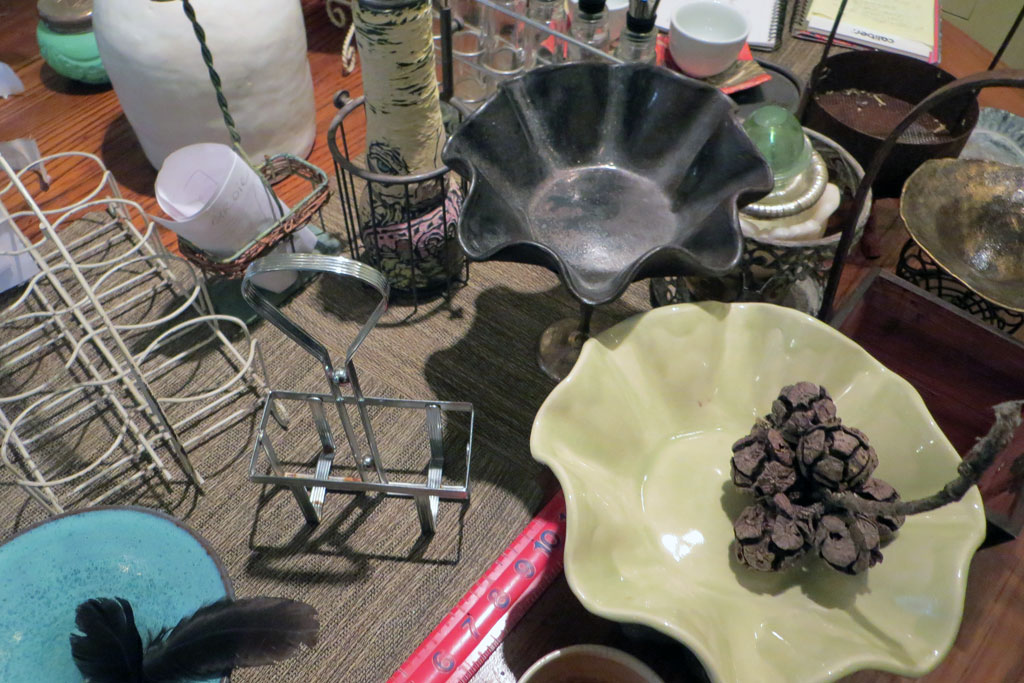 Way TEN:  I iterate. Probably not as fast as I physically can, but as fast as I comfortably can. I’m not compulsive about it, knowing how I roll anyway. I enjoy a rich life outside the studio as well, which also slows my making. Sometimes, when I return to the studio after being away a week or so, I find I have quite forgotten how to do the exact thing I left off from, or just where I was in my thinking. So, I’ve also learned to keep detailed notes, measurements, snippets of insights, firing logs, materials records, even tool and brush notes for each project. Yes, keeping records takes longer too, but when I return – sometimes years later – to try another iteration, I don’t have to start from the get-go, either.

–Liz Crain, who makes “off-screen” lists like this, too, in order to understand what she thinks. It’s almost time for her Annual Studio Rededication Mini-ritual and she’s taking stock of the past year.

2 thoughts on “I’m Iterating As Fast As I Can”