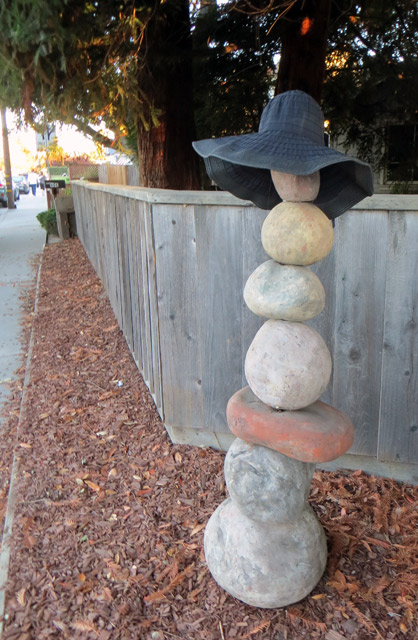 The Set-up: I live and maintain my studio in an impossibly old (1933) cottage facing what has, over the decades, become a main artery street in the charming beach village of Capitola, CA. I see lots of dogwalkers, strollers, bicyclists, joggers, skateboarders. Middleschool kids. Motorcycle groups.  Lots of semi-lost out-of-townies. (How do you give directions to a lovely German-only-speaking gentleman and explain there are two separate Grace Streets and he’s on the other side of the creek from both of them? Give him a highlighted AAA map. Remember those?)

We endure a panoply of perennial foot and wheeled traffic clogs related to: school/church/concerts/festivals/races/Junior Guards/Surfing Santas/car shows/construction and nearby freeway tangles. Our place, built in a time of modest one-story homes on larger chunks of land, sits way back on a deep and angled lot, buffered by a front wildlands of Redwoods, Sword Ferns, Nasturtiums and Japanese Maples. And also by my growing ceramic sculpture garden! It’s cozy and generally feels far from the madding crowd. Yet the border between us and them is a porous one. Cue the ominous music.

The Backstory: When we moved here in 1992, there was a natural streetside buffer hedge of Agapanthus, New Zealand Tea Tree and those Coast Redwoods so young you could barely crawl under them. My little boys loved that hidden world.  Over the years, the Agapanthus was done in by the middle schoolers snapping their bloomstalks for swordplay and punk-pruning the leaves. The Tea Tree grew rough and scraggly trying to find the light. The redwoods widened and their branches got weighty.

When the redwood canopy grew tall enough that some of its lower branches died, we cut them off, dug out the challenged shrubbery and built a fence. But we made the strategic mistake of not placing it right next to the sidewalk, inadvertently creating what we now call “The Hellstrip.” It’s the slice of land between the fence and sidewalk that we are the owners of, but is more available to the passersby. We planted some low-maintenance sturdy plants good for our Mediterranean climate: Tuscan Blue Rosemary, Bronze Fennel and a few Heavenly Bamboo. They all looked great, until they didn’t.

Rosemary loves sun and the redwoods’ ever-expanding branches soon denied it that. The Bronze Fennel, basically a badass roadside weed, billowed out into the sidewalk, needing constant cutting back. It also seeded itself in front yards all along the block. Oops.  The Heavenly Bamboo choked, died, and went to heaven.

The thing the remaining plants were superb at was collecting trash: empty latte cups, soda cans, beer bottles, food wrappers, dirty diapers and other nastiness that is dumped from daytrippers’ parked cars before they head for the highway. For the sake of auspicious feng shui, we tried to keep after the trash, but some of it was tucked deeply into the brambly thicket on purpose. Which brings us to…

The Sidestory: This involves the local liquor store and my around-the-corner neighbor.  The empties we picked out of The Hellstrip were largely a certain cheap-o brand of tequila airline bottle. I get it: A couple of quick snorts to smooth your downhill walk to the beach from your parking spot a half mile out seems plausible and, hey, why carry annoying empties when you can ditch them at Crain’s Convenient Hellstrip?

But then los pequeñas botellas de tequila began to appear abundantly in our backyard too! WTF? We inquired, Dragnet Style, at the liquor store. “Anyone you know buy a lot of this-and-such brand of tequila shooters?” We learned who the perp was and that the store had nicknamed him “Socks.” Socks because he also bought beer, which was OK with the wife for him to walk in the door with, but not the tequila – which he stuffed into his socks while at the register, saving a few to toss back on the way home, ditching the evidence in our long-suffering rosemary. Apparently the rest were downed on the sly in his backyard and the empties went over the fence. Until we began to throw them back with gleeful confidence.

The Decision: Meanwhile, back at the Hellstrip. We determined to gut it. The living redwood canopy was far over our heads. It took all season to cut and buck up those dead lower branches and we had mixed feelings about seeing out to the street for the first time. And about folks seeing in to our sanctuary as well, yet there it was, done and done. The fence gained in importance. We dug out the rest of the scrub in front of it and were rewarded with 33 more little tequila empties. I briefly considered epoxying them along the fencetop, but instead we made a Public Art Dare. We covered the dirt with brown mulch and moved my tall ceramic totem rock cairn to the triangular end of the strip by the driveway. Simple, distinctive, bold, with a confident Zen aura. Even the dogs left it alone.

The Climax: That lasted three months to the day. Because I could easily see out to the street now, I experienced more emotional vulnerability for the piece than expected and always had an eye on it. Yet I believed in our classed-up Hellstrip and wanted to give it a chance. Over the summer, the piece was obviously leaned on, fiddled with, taken slightly apart  (even though it was centered on a deeply sunk length of rebar and puttied together.) It often appeared oddly unbalanced, which challenges both Zen and believeable gravity. I came to expect some permanent damage at any time and spoke of relocating it.

What finally happened you can see in the photo. One Sunday we awoke to this completely playful black sunhat perched saucily on the rock stack, animating its wonky posture. It was a charming and somewhat loving gesture, really. But it was over. We had dared too greatly. We disassembled the piece, levered out the rebar and moved it back behind the fence. In its place we put a lower ceramic rock with three smaller ones artfully epoxied onto its top surface. Still sculpture, but unassuming. Maybe it will get monkeyed with, but at least there’s no magic to compromise. Like I said, it’s a porous border we’ve got here.

The Denouement: Art out in the open is plainly vulnerable. Just ask the Mona Lisa (stolen/paint tossed/hurled teacup), or the Cleveland Museum’s version of The Thinker (bombed in political protest in 1970.) I served a term on Capitola’s Arts Commission awhile back and learned of defaced murals, smashed and missing marble dolphins and stolen tikis, all apparently caused by things going bump in the night around undefended art. That knowledge probably contributed to my simmering worries about the totem, now that I think of it. I feel better to have moved it out of easy reach.

–Liz Crain, who, now that she can see more of them, also wonders deeply about the people out on the sidewalk. Their babies and dogs, jobs and agendas, hopes and fears. Especially about the tiny, impossibly wizened, blank-faced and silent old woman who most mornings stands – never sits – sometimes for hours, at the far end of the front fence under the branches, drinking her coffee and smoking her cigs. She always wears a down jacket and white beanie with a backpack and a shopping bag full of empty paper cups by her feet. She’s seen all ’round the Village and is rumored to live nearby, but “may have been kicked out.” No-one is sure, and she’s surely not saying. There is little cognition in her eyes. At about the same height and lumpiness as the rock cairn, all summer she bookended it, appearing as as sort of guardian angel, ensuring a gentle end to the Public Art Dare.

4 thoughts on “Art in the Hellstrip”