I am parting out and giving away this group of 53 miniature face jugs from 2009. They come with the caveat that I am hoping to give each one to the person who, unbeknownst to them, was the inspiration for it. After six years, that is still possible – a few have already been delivered! –  but it will take some time and help getting the word out. Desperately seeking these folks – and the folks who know these folks – to put us in touch and complete a circle I never knew I was making.

The Backstory, The Epiphany, Spreading the Word and the List of Names follows.

END_OF_DOCUMENT_TOKEN_TO_BE_REPLACED

A new series of face jugs has begun! Similar to the Local Talkers 2009 in that they are based on the faces appearing in the 2011 Local Talk column of the Santa Cruz Good Times, but different because each one is full-sized and meant to be a stand alone work.

I’ve lifted some of the limits I placed on myself in 2009, in that I can choose one or more faces/respondents a week, or none. And I can base my choice on expression and/or on what the person says.

Each jug is stamped with that person’s first name, last initial and one word of their reply to the question of the week. In the top photo are, left to right, Cecil U. Stopped, Kate K. Y and what eventually became Nicole B. Amphitheatre.

Here she is at leatherhard before being cleaned up and getting the base coat of underglazing.

And just for fun, here’s a close up of the source face.

For me it’s not about creating a photographic likeness, but an energetic and gestural one. The clay jug form has its own demands that must be served. The cylinder needs to balance in all ways. It can only stretch so far. It can’t get too heavy with add-ons. (Hair!!!!) It needs to function as a vessel, although I’m finding I care less and less about that as I go deeper into sculptural expression. I just might be getting to the same place as sculptural teapots which are generally full of narrative and SO not meant to be used for serving tea!

I am keeping better studio records this time too. Here’s the page so far for Cecil U. Stopped.

So, that’s my Studio Report at the outset of one thematic series I will be exploring this year. The face jugs provide a looser more organic foil to the other works I’ve got going and I like that I get to find my way from the plain cylinder to the character waiting to take form. 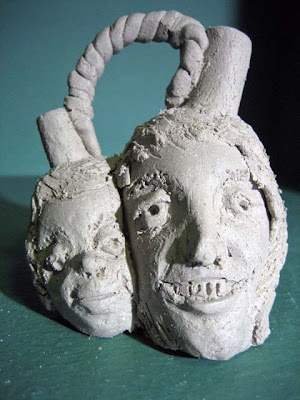