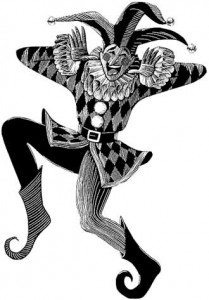 “Cleverness is not wisdom” ~Euripides

Beware the Pleasure Island of artistic cleverness! It will make donkeys of us all.

I admit, I’m no different. I’ve boogied around that isle, delighted with my parlor tricks and sight gags, elbow-jabbing viewers into acknowledgment of my conceits. “Get it!?” – which surely obliterated any tender scions of artful charm.

And I’m not the only ass here: I watched my artwork rapidly grow its own ears and tail and morph into a One Trick Donkey. Well, then!

As much as I suffered, I lacked enough understanding to dodge this pitfall. Was my work Un-skillful? Under-realized? Tentative? Brash? Or, horrors, Sophomoric? Yet, those descriptors felt tangential. I needed to grasp the heart of the cleverness mechanism so it could become my creative tool to wield with dexterity and intention.

The epiphany came from two related concepts learned at the side of my longtime mentor, Kathryn McBride:

Avoid the Merely Clever and its corollary, Apply Irony.

A few years back, as Kathryn and I were walking among student displays at the annual California Conference for the Advancement of Ceramic Art in Davis, I heard her snort in amusement, and then wonder out loud if the humorous piece in front of her was “merely clever,” meaning it fell short in certain ways.

She explained that her own MFA work in Ceramics at San Francisco State had received this truthful critique and she’d became a more conscious and confident artist because of it. Decades later, she still found it useful in assessing her own ideas. And by being able to recognize mere cleverness in the work of others, she could guide students beyond the first layer of their creative impulses to a truer meaning.

From that time on, we would smile and rather conspiratorially use “merely clever” as a gentle codename for any work which took the expected and easier road home, even if exquisitely executed.

And at long last, I had the conceptual tool I needed to identify and go beyond visual one-liners myself.

Yet, there remained works and artists who seemed to dance tauntingly close to the “merely clever” trap, yet not fall in. How? Why?

And why did one of Kathryn’s most successful perennial assignments ask her students to make a work illustrating a Tired Old Cliché? She even provided a list of 80 kickstarter sayings and phrases. Wasn’t this a recipe for a snooze-fest of obviousness? Yet hackneyed chestnuts such as “Let the cat out of the bag” and “Butterflies in the stomach” provided the springboard for some literal yet profound interpretations from students at all levels of artistry. Why?

Only in recent months have I realized the answer. It has come from a sagacious little book titled 101 Things to Learn in Art School by Kit White. Item 94 on the list is “Irony has controlled the stage in contemporary art since the end of Modernism.”

Let me quote the discussion of this a bit more:

To avoid the twin whirlpools of the easy send-up on one side and the sentimental on the other, come to a clear and meaningful understanding of how irony works as a serious factor in the world. As Richard Rorty once wrote, it is the recognition of “the contingency of all things.”

So, there you have it. We can still visit Pleasure Island, just bring along some 21st century conceptual donkey-embracing armor. Irony brings complexity, depth and wisdom to the simple shallows of mere cleverness. A meta-conscious dose of the ironic in our artwork turns the piece, tragic or comic, real or abstract, into a consideration of what it also is not and of what else it could be, evolving the work out of our clever heads into our all-contingent hearts

~Ironically, Liz Crain is a sometimes-narrative ceramic artist who completely agrees with Ludwig Wittgenstein’s admonition to “Never stay up on the barren heights of cleverness, but come down into the green valleys of silliness,” – which Kathryn also knew well, especially when over-tired.