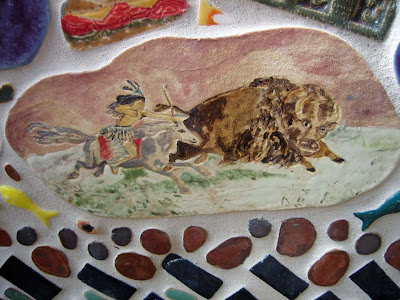 It’s Thanksgiving Day with lots of family and food to enjoy, so here’s a short and sweet post about one of the most unusual tiles on the Five Senses Bench at Cabrillo College. Its source is an old drawing of a Native American horseback rider just about to shoot a wide-eyed and galloping buffalo with a fully drawn bow and arrow.

AB was a young man of tentative speech and Deep Thoughts and he went ‘way outside the box for a tile which is down low on the Taste area.

I have more questions about this tile than answers, but I am still glad it is there, evoking a separate reality in a sea of candy corn, pizza and gummi fish.

Did he mean to suggest a taste for blood?
Was he referencing food for pure survival instead of entertainment?
Did he want us to think of a more direct way to hunt and gather our sustenance?
Is he offering any chastisement of modern food gathering, especially of our meat?
Is this a nostalgic historical scenario?
Is there any political/cultural commentary here?
Did he just want a narrative verb-like tile instead of a static noun-like one?

I don’t know! I never got an opportunity to ask him because after he made the tile he dropped out – but not before he sweetly asked me to promise to finish the tile’s glazing and attaching.

Even though he still comes and goes on campus, I would never be so bold as to put him on the spot with all my unanswered questions. I would have to be very oblique and casual, and since so many years have gone by, he may not even remember what he intended.

Do you have other questions? Do you have some answers? I personally love the mysteriousness here and the fact that I don’t get it is just fine. Back to family and feast!