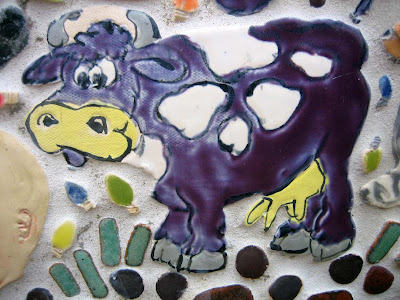 Purple Cow
by Gelett Burgess
I never saw a purple cow;
I never hope to see one;
But I can tell you anyhow;
I’d rather see than be one!
Maybe it’s a stretch to call it poetry, yet it is in the vein of limericks, Ogden Nash and my pal Ernie, so I think it does qualify. Apparently the original verse caught on and grew to become a source of torment to Mr. Burgess, who was moved to pen a rejoinder a few years later:
Confession: and a Portrait, Too, Upon a Background that I Rue
by Gelett Burgess
Ah, yes, I wrote the “Purple Cow”–
I’m sorry, now, I wrote it;
But I can tell you Anyhow
I’ll Kill you if you Quote it!
Illustrations succeed best when mirroring the spirit of their source text, and I think this cartoonish, dippy, unreal cow tile does this so well! If no one has seen a purple cow, the fantasy image is open to interpretation, which then becomes our primal imprint.
Case in point: the images of Winnie-the-Pooh and friends forever in my mind are from the book illustrations of E. H. Shepard and most decidedly not Walt Disney Studios. That’s probably not true for a lot of others who only saw the animation and never the books. A thousand words, people, a thousand words!
Before this edition of Thursday’s Tile concludes, I want to also share with you the fact that the novel idea of a purple cow has gone beyond a fun rhyme. Wine, tobacco, clothing, food, even sports mascots derive from this quatrain of iambic quadrameter, which you can read all about here, if such is your hunger for knowledge.
Until we meet again, enjoy all your chimerical referents, wherever you encounter them, but, take it from Mr. Burgess, keep it to yourself if a slap-happy Muse whispers verse about them into your head!
Share this:
Categories: Community, Studio Journal
Tags: E.H. Shepard, Evil eye, Gelett Burgess, Horus, iambic, limerick, Ogden Nash, Purple Cow, quatrain, Third eye, Triton Museum of Art, Walt Disney, Winnie-the-Pooh

Thus began the letter from the Santa Cruz Art League. It said that my work was accepted into their upcoming Beasts On Broadway, Animals Galore exhibit, which was juried by George Rivera, Executive Director of the Triton Museum of Art in Santa Clara, CA.

Well, triple yippee to that! This letter is also heaps sweeter in ways beyond its YES! to my art and my efforts to take it into the world for Show and Sell. It says YES! to rats and YES! to pertinacity.

Here’s one piece that will soon be a Beast on Broadway. It’s titled Ratty Got Her Wings. I made it this past summer while studying at Skyline College in San Bruno, CA with the inspiring and wise Tiffany Schmierer. (I put 2,500 worthwhile miles on my car in order to receive her inspiration, guidance and feedback! I can’t wait to share this good news with her.) 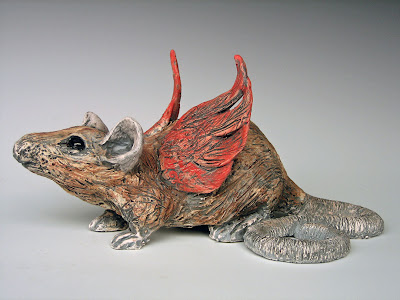 Rats are one animal that get a bad rap over their historically, and admittedly not undeserved, bad rep. Yet to categorically reject all rats is, well, Rattism. You can find lots of positive action websites dedicated to easing that prejudice. Look, there goes one now.

My piece is more personal than political, though. Rats, even pet ones, just don’t live very long. Two-three years. This life-size rat sculpture is for all the gentle females that came to be cared for and then leave my sons: Zelda, Kiwi, Latte, GL (short for Greased Lightning,) the One-Who-We-Can’t-Quite-Remember-Her-Name-Right-Now, and dear Moose. They are buried in a group in our redwood grove with a sign, RaT pAcK, posted on a nearby trunk. 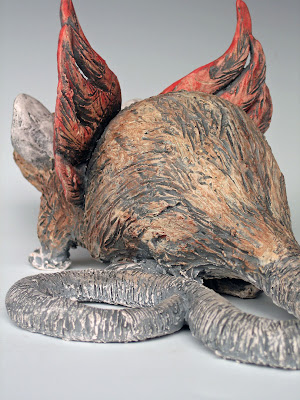 Ratty Got Her Wings is my way of saying a heartfelt thank you to those animals. I’m certain that the intimate knowledge of their bodies and movements allowed me to fold that love into the sculptural form I had in mind. Here are two more detail shots of the piece: Oh my, that dreaded snaky tail and a perky face because a rat knows you,just like a dog does. 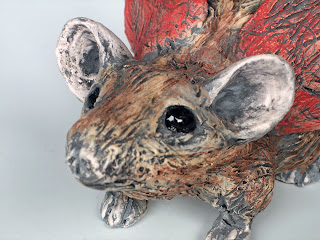 So, what about that acceptance letter’s ratification of pertinacity (a $2 word for doggedness)?

Like Weight Watchers, I have joined the Santa Cruz Art League at least four times since I moved here in 1989. I’d join for a year, desultorily put something in the everyone’s-included Annual Members’ Exhibit, never quite figure out what else I could do to become involved there, feel awful artistic angst and let the membership lapse. In a common case of sour grapes, I mentally thought of it as The Fart League, which surely is neither clever NOR original. Last year, however, I joined with some goals in mind and I knew that if I did not see them realized, I would understand why, not feel bad and move on to other venues for my work.

I think that a more professional grade of doggedness led me to both better art and better ways to present it and it is what ultimately got me into the animal show at SCAL. To my way of thinking, it is decidedly all connected

In one way or another, though, I have been perfecting my art my whole adult life. But I have been effectively perfecting how I package and present that art less than a year. (Read my last post about my business card saga, just to hear one story about this.) One of my undeniable artbiz mentors is Alyson Stanfield. And now, as I wind up an online blogging class with her and Cynthia Morris, I can say a personal but public thank you to them. And to the other students I have struggled alongside, who I have come to know through their questions, humor and writing: Dear Artists, Congratulations!