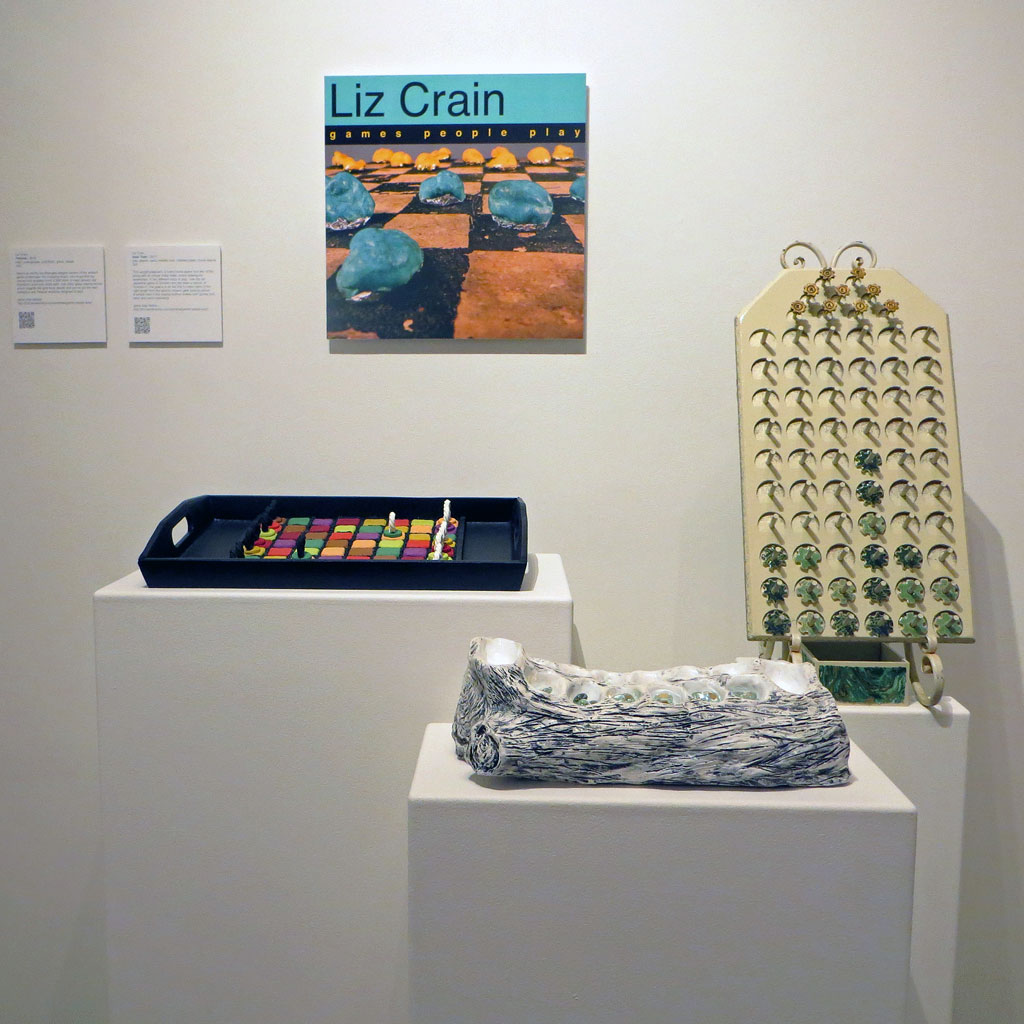 This is my Oscar Acceptance Speech. Or maybe it’s my Jimmy Fallon-style Thank You Notes, and I promise to keep it short and heartfelt. But guys, just look at that shot of a portion of my Games People Play Solo Show! To make such a sustained effort in the studio and to see it showcased so nicely gives me a thrill over and over. It’ll be great to move on to whatever’s next, but first, a moment please, to acknowledge the crap ton (a technical term) of help from my friends that I had in bringing it to this point. It would have been insanely harder, if not impossible, without them. In no particular order, other than what my perforated remembrance affords, they are:

Thank you to Derik Van Beers, owner of Roscoe Ceramic Gallery in Oakland for inviting me to show with him a second time, and then waiting a whole ‘nother year for me to get it together. He says he needed to use ALL his pedestals for the first time ever; even had one more fabricated. He arranged it all so powerfully with his excellent graphic designer’s eye for grids and millimeters. I am proud to be a part of what he does.

Thank you, John, for suggesting industrial O-rings for the Toss It Off game when I was pretty much out of options and unhappily facing the choice between cheesy or nothing. (It was the first game sold too!)

Thank you, Roger, for rattling off the basic concepts of Game Design so fast, I couldn’t read my notes. Fortunately you patiently reiterated them often. Concepts like Storyline, Motivation, Goals, Rewards, Interruptors, Visuals, and Repeatability helped me understand what the nature of good gaming comes down to, whether it be your video or my abstract strategy. Oh, and thanks for forbidding me to use the tiny googly eyes.

Thank you, Cassandra, for letting me buttonhole you every time you visited to chew over the aesthetic/appearance problems of whatever game I was wrangling that month. I absolutely rely on your surefooted visual design standards.

Thank you, Grace, for being my role model, cheerleader and ur-patron, and for being a jolly willing hand model, too.

Thank you, Max, for that weekend of wee hours, madly working out gameplay kinks on several supposedly “done” games. It showed me that elegant functionality matters as much in games as it does in teapots.

Thank you, Amy, for even more listening (OK, everyone had to listen to me…) and your curiosity, caring and sharing.

Thank you, Facebook and Instagram Friends, for the witnessing and sorely needed AttaGirls as I worked through the thrills of victory and the agonies of defeat in the studio. Your love and humor kept my serotonin and dopamine levels up.

Thank you, Priscilla, for being available on kinda short notice to add a whole new Games page to this website – which necessarily included a once-over for all of it –  and for doing it with gusto, precision and your own creativity.

–Liz Crain, who thanks, too, all of you readers of this Studio Journal. Near or far, your following along here matters deeply and truly. I’ll be taking a short break now, but will be back with tales from the massive studio purge/remodel that I have already begun.

Previous Posts About the Games In This Series

Games People Play: Toss It Off and Gear Train

10 thoughts on “With A Lotta Help From My Friends”