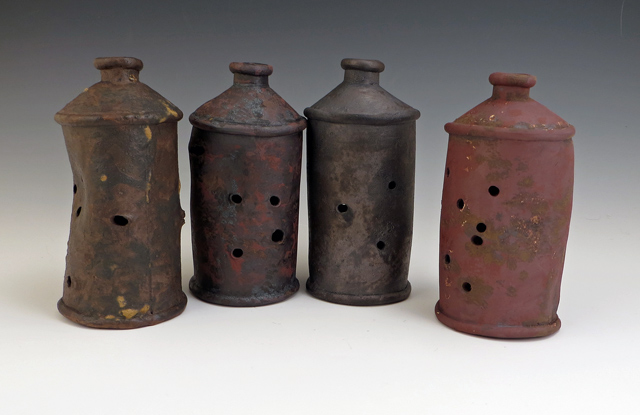 In our Summer Studio Journal Re-Runs, let’s revisit this post from September 1, 2011 which is essentially a paean to the well-examined rusty surface. It seems the more one looks at rust, the more one sees and the deeper the story it tells. Even now, as my work is moving in other directions, the things I have learned from trying to recreate the tastiest rusty surfaces stay with me and continue to whisper. I still relish rust! Let’s see how it began.

Arrayed in a netting of motley spots, swaths of lichen-like crusts or perhaps in random streaks of dull over shiny,  rust – a result of iron oxidation – is a fascinating study. Its visual appearance speaks more of an event or process than of a static state of being, making it both unremarkably common and maddeningly unique.

To create the look of a vintage metal container in clay, I find I need to constantly scrutinize how rust interacts with its subject. Notice how it invades a formerly new surface, how it spreads on edges and dings, the extent of its reach on the salient and the crenelated. How many colors are on those few square inches? Cream, ochre, peach, terra cotta, roan, burnt umber, ebony. You can’t make this up.

If I only wanted a rusty color on my work, though,  I could choose one from the underglaze crayon box and have at it. OK, maybe two colors. But I want more: I want my ceramic surfaces to be believable as real rust, real metal, especially in that initial gander. Yet, in the next glance, I want the viewer to fully notice that it’s not real rust, not real metal and then waver between the two sensations,  not quite believing either version of what the eyes and mind are telling them. Trompe l’oeil in action! I want them to have to look again and – very important  – to reach out and dare to sneak a touch. And just maybe need to take the piece home for further contemplation and remarking.

I’m also wary of crafting too-exacting of a replica of a rusty container, because, like a kid in Sunday Best, the piece then lacks rambunctiousness. I prefer to create a compelling interpretive impression of form and surface instead of executing a physical inventory report.

In both shape and coloration, I want evidence of my subject’s imagined narrative. What’s the story in each piece? Did this can get tossed into a roadside ditch? Left in the attic of a construction site? Was it butt-down in a mid-last-century dump? In what part of his musty basement workshop did Grandpa store this? Where’s the lid and what broke off right here? Did the graphics fade evenly with time, or only on the side they got decades of sunlight and weather? Rust is nearly always involved in this equation. Best to bump up the study.

It’s another delicious case of learning to see and seeing to learn. Photos are great for starters and finishers, and I use them often for detail suggestions, but the meat in this sandwich is reality. It requires looking at a lot of real rust (which, fortunately for me, is nearly everywhere) and then acting on those observations, sprinkling them with imaginative narratives.

Knowing that authentic props help, people give me rusty stuff and unusual vintage metal containers. Or they tell me where to find them. My favorite “Rusty Things Walk” ever is in the completely littered desert  just across Highway 127  from the Amargosa Opera House and Hotel  in Death Valley Junction, an old borax mining company town. For miles around, the wild and enduring encrustation of broken machinery and glass, coupled with the scrubby scrub, widest of skies, and Eagle Mountain in the near distance pleases my soul. So does a collected boxful of odd bits: square rebar, glass shards with rusted chicken wire inside, a child’s toy and, always, cans with bullet holes.

That’s my kind of vacation: one with the time, space, and silence to ponder and to let rust whisper its secrets.  Later its messages will find their way to my hands in the studio, seeing and learning translated into doing.

1 thought on “Rust as Teacher”