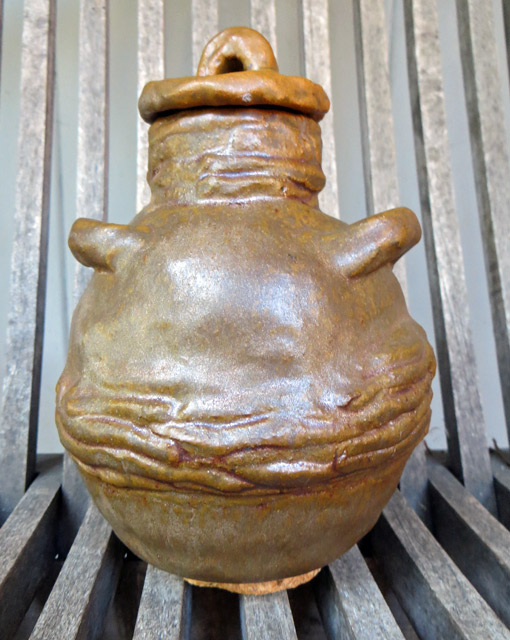 We’ve been reading Kant’s Analytic of the Beautiful in my Beastly Beauty Philosophy Class. Not gonna lie, it’s tricky stuff and I’m glad I got this far in life before attempting it, because I have the fortitude of undaunted age to hang it on. The best part of getting through Kant is that he delivers: there’s a big fat nougatty nugget of truth as a reward for swimming in that 18th century wordalicious deep end and here it is:

The hell you say, because you, in your Kant-free state, already knew it: Eye of the Beholder and all that. And, sometimes bad is bad too. But how do you tell? And why should you care to? Can you change your mind? What if it’s just as vital to say what’s NOT beautiful? Is that a truer root of taste and discernment? Does any other opinion besides your own really count? Let’s discuss with a visual.

Exhibit A: The Pretty Poopy Jar.

From a technical ceramics point of view this piece is all wonky. As a form in space it’s squat and leaden. A pot-bellied 7″ tall, weighing 2 pounds 3 ounces, it’s more appendaged cannonball than vessel. Profoundly lumpy and misshapen with an ill-fitting lid. Gloppily glazed in a color I call “Loaded Huggies Brown.”

Visually, it’s dang ugly. Each part of it – from lid to foot ring, from neck to shoulders, from lugs to belly texture – seems unrelated to the others. Unresolved. Irredeemable.

Functionally? Well, I haven’t tried that out and probably won’t. It’s too heavy to wobble much and I can’t see what grossness may or may not be inside, and I’m not inclined to find out.

Yet, at the same time I find myself so fascinated with its spectacular homeliness, I have started to engage with it beyond its appearance and function. I seek to know its story:  is it the work of a child? a rank beginner adult? a wabi-sabi practitioner? How did the artist regard it? Was there shame? Adoration? Why was it given away? Do they miss it?

I’ve grown fond of this piece and am beginning to see it as perfectly beautiful. I tried to take an ugly photo for this post, but it’s too late for me. It looks even better in the photo, with a primitive integrity. Like a perky Venus of Willendorf. It may be the most charming and honest piece in my entire collection.

Kant would say I’m having an individual aesthetic response and that’s the only one we each can have. Yes, it’s subjective and we don’t have to agree, because the truth for each of us does not lie in the art/object. But when we do agree, what is at play? Is it cultural? Cognitive? Did you already like the Poopy Jar, but then when I pointed out its faults, did you doubt or amend your response a little? Does the fact that I think it’s beautiful pull you a little more in that direction, even if you’re still a bit repulsed? Can I bring you along with me? That’s how taste becomes more widespread. And then we wind up with our Davids and Mona Lisas, our Taj Mahals and Eiffel Towers. And all the debatable pieces inbetween.

There’s one other thing I’ve always suspected about Beauty: the Beast in each of us does the initial responding. Our aesthetic experience is visceral and emotional. A feeling first and our “reasons why” second. I initially called it my Vibe Theory of Aesthetics and it turns out that’s just as viable of a description of what’s going on as any other so far. The philosophers have never quite pinned aesthetic response down, they just note that it’s real enough to describe in effect, but cannot state how it arises, and then one by one they change the subject.

Enter Neuroaesthetics, a scientific approach to the study of aesthetic perception. Is it sourced in our vagus nerve? Our brain chemicals? Our hormones? The Music of the Spheres moving through us? Is Beauty our sensate meat-selves aligning in some completely human manner with all the things we can’t quite perceive and still ringing so true we are momentarily convulsed and tickled? Is that what that dumpy little jar did to me?

–Liz Crain, who has learned that in Philosophy there are way more questions than there are answers. And all answers are open to more questions. To paraphrase an old saying she once heard about Building Inspectors: “Arguing with a philosopher is like wrestling with a pig in the mud. After awhile you figure out the pig kinda likes it.”

(Thanks to Martha Beck for the word meat-self!)

2 thoughts on “The Pretty Poopy Jar: Aesthetics in Action”