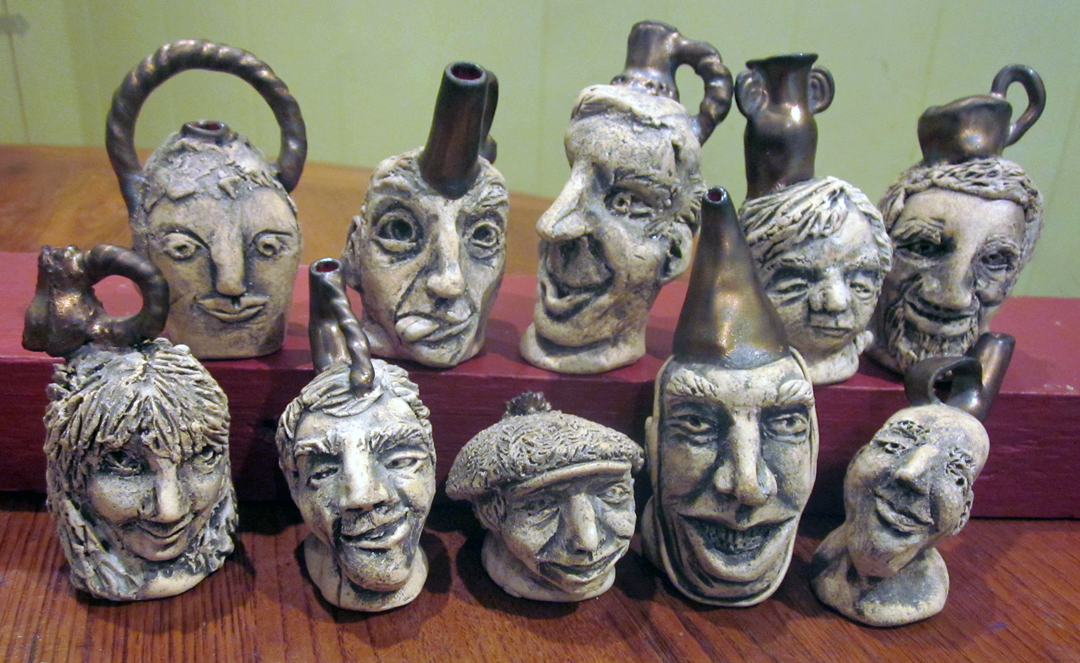 I’ve had a fine old time connecting with 19 out of 53 (36% so far!) folks from the “Local Talkers 2009” series of mini face jugs that I made back then and am now giving away to the folks who unwittingly posed for them. IF I can find them!

The whole idea is described in my last post, if you’d like to delve further. That post also contains the list of all 53 names AND who’s been located so far. I keep updating it and I will also include the shortened list at the end of this entry as well.

The photo up top contains two of my most sought-after faces from this series: Tongue-Sticking-Out-Guy and Party-Hat-Dude. They’re a remarkable couple of mini jugs I honestly could have sold over and over individually – but both went back to their sources this week. SO glad of that!

I have been calling these jugs “party favors” because I not only lovingly wrap each piece, but include a photo of the whole grouping as well as a postcard and biz card of mine just in case they want to track me down in the future.

I also have accidentally-on-purpose managed to NOT meet any but ONE of these folks. That person is #50 Matt Scott, the author of the Good Times Local Talk column from which they were all sourced. That has been quite enjoyable as well. I have been to his home, which is teeming with his art, his garden, his chickens, his friends, his lively life. I call him my Art Broker as he seems to be able to make the connections I seek.

At least so far.

We are entering the second ring of connections, the ring where it depends on friends of friends, co-workers, chance connections. And of course YOU are included here. You’re my Only Hope, actually.

Might you know (or know someone who knows) these remaining Local Talkers? Might you share these names around your universe and see how far they travel and what they bounce off of, perhaps echoing back to me? Contact me here, on FB, or however  you can. It matters.

So far, all but two of the 19 Local Talkers I have found still reside in Santa Cruz – but one never knows. It’s been a long and fruitful six years, the world is our playground now.

–Liz Crain, who understands pertinacity and love, especially when it comes to art-making.