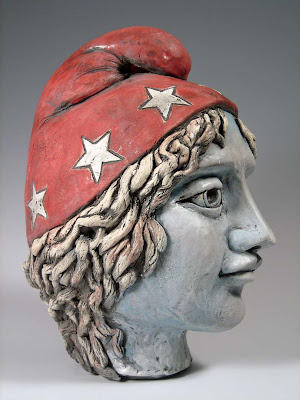 Here’s another work from my Tiffany Schmierer Skyline College 2009 Summer Session: Phrygian (the cap’s style) Phreedom (because it is based on the face of Statue of Freedom on top of the US Capitol Building.)

Anyhoo….I have a thing for these sorts of classical faces, both the originals from Ancient Greece and Rome and the Neo-classical interpretations down through the ages.  I have worked with the fearsome face of the Statue of Liberty, and while it is inspiring, it has a certain stern quality. Take a look at some close ups. There’s a straight-ahead no nonsense eagle-like stare to this statue.

Contrast this with the sweet face of the Statue of Freedom! Still inspiring, but perhaps more egalitarian than eagle-like. The more I looked at this face, the more I wanted to make a larger than life-sized head based on it. So, using the techniques I learned a few summers ago from Stan Welsh, I built the basic Big Head shape.  I so appreciated conferring with Tiffany over the technical and aesthetic fine points as sometimes it comes down to millimeters and the fine dance between darks and lights….it really does. We proved it.

What a nice face, but what to do about all that fancy headgear on the original statue? Yes, I suppose it could be made of clay, but it would not only be a dicey proposition to execute and forever vulnerable to breakage, it was also a complete aside to my inspiration: that face.

If one is making a 3D sculpture and is not working from a 3D model, live or otherwise, it is useful to have lots of resource photos, from as many angles as possible. I love the internet for that function alone. In my Statue of Freedom visual travels, I read this whole wiki article of its history, and simultaneously answered my question about what to do about the headdress: The Phrygian cap, aka the Freedom Cap! It was the sculptor’s original choice….and it would be mine because I loved it and it was a tiny way of thumbing my nose at Jefferson Davis’ wrong-headed policies. I would give her the headdress she was supposed to have.

Yes, this hat has appeared in many guises throughout history, and yes, it is a Smurf hat shape too. So???? I love all of it, the sacred and the profane. And, did I say I love this face? I imagine making other versions of it. In the meantime, some of you may recognize it from my Facebook and Twitter avatars.  As I said, I have a thing for this kind of face, so ultimately it is a reflection of me and I am comfortable with that. Phreedom, indeed. 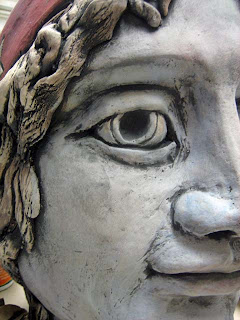