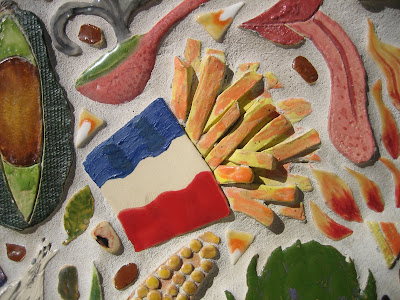 This week’s tile remains a permanent testament to the era of its making. It’s located on the vertical back right of the Taste area of the Five Senses Bench, next to the long tongue licking the fire, which is another interesting story to be told another time.

Do you remember “Freedom Fries” from early 2003? When our ally France refused to support US intentions to invade Iraq, the elected legislators in charge of the US House of Representatives restaurants, cafeterias and snack bars, following the lead of some uber-patriotic restaurant owners, renamed French Fries and French Toast on all the House menus, removing the word French and substituting Freedom.

Oh la la, that must have stung those recalcitrant Frenchies and made them reconsider! Nothing like petty playground bickering to foster important international alliances and aid in war-mongering. Those were the times, though, lest we forget.

I remember some TV and online news squawkings about it, and on SNL’s Weekend Update Tina Fey reported, “In a related story, in France, American Cheese is now referred to as “Idiot Cheese.” Indeed.

You can read all you never knew about Freedom Fries in this fascinating Wikipedia entry. I especially enjoyed learning that the renaming was (quietly) reversed in 2006. Oh, and the Historical Parallels are enlightening: Apparently, if we human tribes refuse to name something, then it doesn’t exist, or at least we give it no additional energy, just like in Harry Potter.

But, let’s get back to this super-sized clutch of turmeric-colored beauties in their tricolor container. The Bench had its guardians, folks who took a special interest in its progress, and GN was one of them. He was in on many spontaneous brainstorming sessions, proudly explained all about it to passersby, yet never seemed too keen on actually decorating a tile of his own. I goaded him! When he finally came up with this personal French twist, he was chuckling and whistling the whole time he worked.

There are other versions of fries on the Bench, but these were the first and they reflect the artist in an oddly subtle yet garish way. He declared freedom from Freedom, made the fries and their container French again, and his “small but symbolic effort” (which is the exact phrase those menu legislators used) provides an everlasting foil to the follies of governments and their battles.