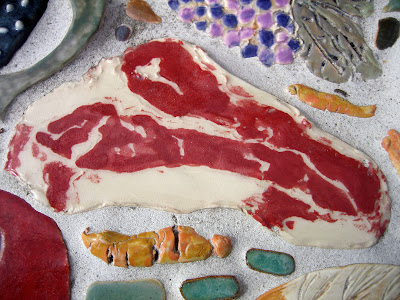 This is the sort of tile on the Five Senses Bench that probably looks better in a photo than in real life. Shot on the perfect overcast day, the photo provides framing and focus, which also helps us see the lovely juxtaposition of off-primary colors that lie right next to “Piece of Meat.”  (Heck, they might even qualify as off-secondary colors! Oh, and the orange-yellow squiggly things are ceramic Cheetos!)

You can find this uncooked classic T-bone steak tile curving slightly on the left end of the Taste area seat. There is really no image on the whole bench that is as blatantly raw, which was JMC’s impetus for including it. He said that the sashimi was too pretty. He was looking for defiant visual *POW* and maybe even meaty offensiveness. Well, as a Bench Curator who maintained detailed Wanted lists for each sense area, so was I!

He wanted to replicate the bright red Threadless “Piece of Meat” tee he had on. Who says art inspiration can’t be found literally right under your own nose? And whether your message is on your chest or left forever for folks to discover and contemplate, it’s just as valid, no?

As with most of the tiles we all made, we used a source photocopy, laid it over a leatherhard clay slab and traced the image with a slightly dull pencil, physically transferring both the outline and the main lines needed later when decorating. Then the shape was carefully cut out with a sharp blade, keeping it perpendicular to the image surface. No undercuts!

Ever so carefully the still-malleable tile was laid in position on the bench and gently curved to match the topography of its intended location. While in position, it also got traced around with a permanent marker, right onto the bench surface, so others would know that spot was taken! It might be weeks or even months before it was ready to be applied. Sometimes we even wrote the artist or image name in the outlined space so we would know who or what to look for if either seemed to have gone missing. Ah, group art projects!

Well, Mr. “Piece of Meat” stuck around for the duration and was thrilled with his contribution.

He told me not too long ago that he still loves that tile, but that the tee shirt is now too large for him because he’s clearly lost a few steaks’ worth of baby fat. He’d love a meat-tee that fits, but it’s “Out of Print.”