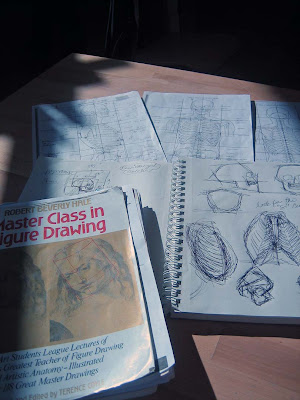 This past year I have sought out the teachers who can tell me what I want to learn in ceramics, a practice I definitely want to continue! Sometimes they are wise colleagues, but more often it has been certain college instructors. Last Summer it was Tiffany Schmierer at Skyline College in San Bruno, CA. This Fall it has been Cynthia Siegel at Cabrillo College in Aptos, my regular haunt.

Cynthia is an exacting master. When she communicates, she expects attentiveness, responsiveness, engagement and active execution. I revel in that! She means what she says and has scads of expertise to share. So, without writing a chapter and a half about this semester, let me show you, mostly in photos, what transpired.

The photo up top contains the digest version of weeks and weeks of exploring reference material for the skeleton. Rather than just making figure sculpture(s) all semester, Cynthia recommended that I delve into the human bony proportion canon of Robert Beverly Hale, and then set about carving a skull, ribcage and pelvis set on an armature in order to have that learning ‘go deep.’

Folks, I was daunted! What the hell kind of shape is a pelvis? I must have made three of them, each stinking on ice. How to translate 2D drawings into proportionate blocks of clay and then ‘find’ the pelvis or ribcage or skull in each one? How to make a temporary armature? How to keep the soft clay from stretching out of its boundaries? How to breathe any kind of life into such an attempt, even if I never plan to fire or keep it? (Hint: find those S curves!!!!) 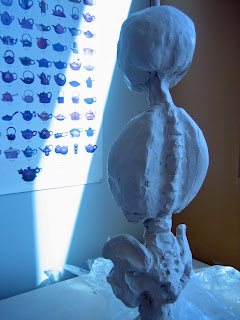 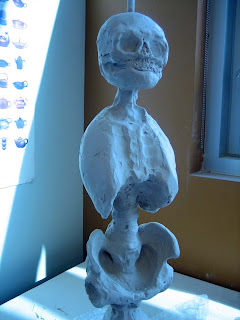 The photos here show how far I got…..hours of searching for those shapes, consulting with Cynthia and adjusting. It was grand. I am not done, but it is just possible I can’t be. Here’s the work in infinite progress. Skull looks a little too round in the photo, too much like Jack Skellington. (Not done!)

What can never show is what went deep inside my mind and sense of touch and form in space from this exercise. It is forevermore beyond cognitive because it lives in my muscle memory too.

That could be the end of our story. It certainly was the end of the semester as next week is Finals. Bony Proportions Skeleton: Check! But, Noooooooooo, Cynthia wanted more from me. She issued this Throwdown: Take two hours and make a figure, any position. Don’t worry about finishing, just bring it Monday to the Final.

What a genius assignment! It allowed me to translate my newfound skeleton framework knowledge into a narrative and to use that knowledge while it was still fresh.

I chose an old newspaper clipping of a local high school runner, Maggie Vessey. She had just lost a race badly and apparently had thrown herself down in the Agony of Defeat. I had kept it because it was so evocative. Here was my Two Hour Throwdown subject! (Pun intended.) 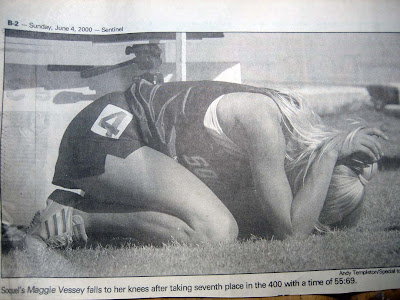 The challenge was to find the skull, ribcage and pelvis positions underneath the clothing and the muscles, to add the appendages and breathe life and gesture into it. At least that is what I wanted out of my two hours. Not getting lost in the details or perfectionism were other factors.

More challenges came from making a 3D piece from a 2D shot. Just what might her left side be doing? I crouched into this position and my own body gave me suggestions. Staying on task, lively and attentive is sometimes a problem for me, so I was proud when I did not stray from my task for more than 4 minutes the whole time.

Here are shots of the result: 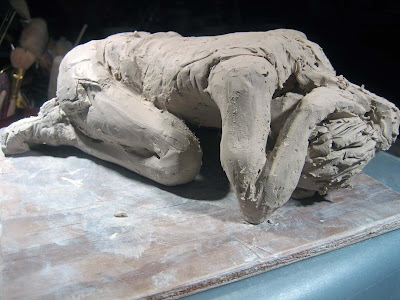 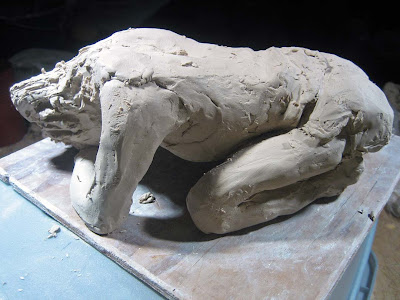 Wow, is what I have to say…not because the piece is so stellar, but because it is evidence of a whole new way of understanding the figure. I am so glad I got to experience my skeleton knowledge while it was vivid. One less vague area with light shed on it. Thanks, Cynthia!
P.S. Since 2000, when this photo of Maggie Vessey was taken, she has gone on to be 2009 World Champion in the 800M. Go Maggie!