Yogi Berra said, “You’ve got to be very careful if you don’t know where you’re going, because you might not get there.” That sums up my early years in ceramics, both with forming the clay and most definitely with the glazing and decorating of it. Even so, when I look back, there are hints of a direction, or at least a pretty persistent search for one.

If I thought forming clay to match my ideas was difficult...(and I did; see last post.)

If I struggled with finding the best timing to shape, attach, carve or walk away from the clay….(Yes.)

If I never was quite certain if I was making it or if it was making me….(both, really.)

Well…. let me just aver, utterly, soberly and whole-heartedly: Those consternations were NOTHING, nothing at all, compared to learning how to choose and apply fireable finishes.

It might be a touch purist and it certainly is a point of pride, but I believe in the completely fired surface. I’m not beyond adding “cold finishes,” but my search has always been to go as far as I’m able with the clay, the ceramic decorating materials and the heatwork of the kiln.

What follows are a selected group of forays into my early surface decorations. I purposely left out the traditional Cone 10 Reduction work because for me it has turned out to be either a default placeholder or a jumping off point for what I really found interesting: Color and the dryer surface.

Here I am getting fancy with lowfire glaze application. If you’ve done anything similar you know glazes chemically react to each other in surprising ways while melting and moving with gravity. This Three Glazes Making a Plaid was probably my most interesting semi-intentional effect. It was basically an over/under triad test tile without me knowing what that was. Yes, the blue and yellow made a sort of green, but I did not expect so much movement on the vertical surface and was lukewarm about the result.  I moved on to the less-flowing colorful underglazes which were definitely more WYSIWYG.

This was more like it! Created during a short two-week Surface Decorating workshop, here’s a simple flattened pinch pot shape which continues the idea of primary color layerings in the previous glazed piece. It benefits from not too much movement in the underglazes AND some bold crosshatched scratches through the wet application. It’s an example of holding gold in your hands and not knowing how to follow it up with any meaningful variations. I may just have to replicate this effect now.

It’s common for academic programs to emphasize Cone 10 reduction glazes and firings and downplay working outside that format. My detailed, colorful and Cone 6 oxidation fascinations met with little support in regular classroom assignments and I did not return to them for two more years.

But one fun thing before we continue:  Once I learned that Duncan Concepts and Mayco Stroke ‘n’ Coat underglazes applied and mixed similarly to paints, I hacked my Franciscan Desert Rose china pattern.  I know exactly the colors to use should I ever want to be a commercial china pattern “paintress.” May have to revisit this one as well.

In an attempt to replicate the linearity of drawing AND the dry-brushed watercolor/colored pencil subtleties I had managed in my previous 2D work, I tried a sgraffito technique which resembled old hand-tinted woodcuts. The piece was covered with black engobe at leatherhard, then carved when it set up. After bisque firing,  thin washes of non-shiny underglazes were applied. They seemed to film up the black, which I needed to restate. It got complicated, but there were vast possibilities here. It let me draw, added lovely directional textures and also let me add color without resorting to too much muddying flow or unsubtle brightness.

It’s good to have skills, but what to do with them? Above are four pieces related to the dancer Isadora Duncan, three of the four using the dry finish colorized sgraffito technique.  These works culminate a certain era in my Backlist Story, so we’ll wind it up with them.

It was gratifying to work from the concept end of clay creating, choosing the forming and finishing techniques I’d enjoyed the most in the service of a Big Idea. They sprang from four separate semester assignments which I knit together around  my theme. They were to make 1. A Hood Ornament 2. A Surprise Box – something which looked different from what it contained, 3. A Portrait of a Loved one, whether representational or symbolic and 4. A Place Setting for the Feast of Dreams, which could be a metaphor.

Here are some closer looks

Based on a photo of the dancer, and modeled fairly solidly and then hollowed out and glazed with a bronze metallic glaze (who said I didn’t like shiny?), this would be a completely classical over-the-top hood ornament for my Art Car!

Here’s a humongous (over 12″ in diameter) caviar tin replica – Isadora loved caviar! – full of sgraffito’d and painted quotations (and she was supremely quotable.)

A champagne bottle “portrait” – Isadora loved champagne! – based on drawings of the dancer, done in Greek vase red figure style.  Finding just the right classic Greek vase red was a challenge! But I had a Greek fellow student who helped me with the inscriptions.

A metaphoric Feast of Dreams place-setting in sgraffito mosaic, mounted and framed. It is based on a description of the six foot long  -with 18″ fringe –  silk batik scarf that Isadora was wearing when it wrapped around the axle of the car she was riding in and strangled her. Dramatic to the end. Let the scarf be the picnic cloth for the hereafter.

And creatively speaking, the Isadora series opened up my personal voice, in not only forming and decorating methods, but in subject matter. Ever after, the work has demanded my personal involvement in the meaning of it as well as the making. At least I know THAT much about where I’m going!

~Liz Crain, who once had an art advisor critique her work by saying, “So you can paint! What now? What will you say with it?” It was so amusingly and lovingly said, it has stuck with her as a purposeful guide. 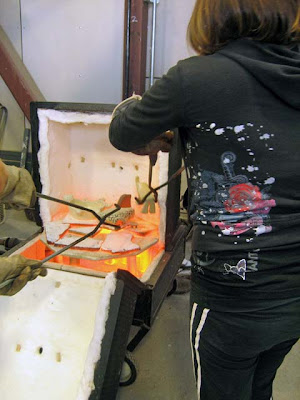 One of the many things I do during my week, besides making and blogging about my own ceramic art, is to help beginning ceramics students at nearby Cabrillo College in Aptos, CA. My special love is the handbuilding program, and this semester I volunteered in two classes taught by Kathryn McBride which met on Mondays and Wednesdays. I have a fairly long affiliation by now (25 classes worth, which I will describe sometime), and I have developed a delicious meta-awareness regarding the cycle of students and their passions, struggles and astonishments.

We just finished a profound Finals Week. Folks, the depth of discussion in the Ceramics Lab was Graduate Level. By that I definitely do NOT mean slinging some highfalutin’ BS about one’s ART, but a real attempt to describe this convoluted process in individual terms: learnings and meanings. What happens, for example, when you think you’re in for an Easy A by Playing in the Mud, and instead you find yourself curious and caring, confused and committed? Chalk one up for the misconceptions abounding about clay! Happens all the time.

Among the more common surprises to students is that there are hundreds of clay types, glazes and decoration possibilities and nearly as many firing options. Right now I would rank primitive pit firings as one of the most profound for students, electric and gas kiln firings as the most frustrating in terms of having to wait a long time for results and for NOT Getting What You Want, and Raku (pictured above) as the most terrifyingly giddy instant happiness ever.

What you see in the photo is that exact Zen moment of aliveness: that glowing kiln full of redhot pieces, emitting insane heat and sparkling with melted-glaze works that students are removing with gloves and tongs to transfer to their prepared reduction cans filled with sawdust and newspaper shreds, to smolder and cool and turn the unglazed clay black and the glazed areas crackly and flashed with metallic highlights.

At no time in a semester is there more presence and focus, except maybe when it is one’s turn in the Final to chat a bit about what happened to you in the past four months in Room 3013. In both cases, the observation of “how you do anything is how you do everything” is true.

I am happy at the end of most semesters: it is good to start and it is good to finish. This semester I am bursting with joy from the students’ loving descriptions of their engagement with this whole huge magnificent endeavor, because it matches my own.