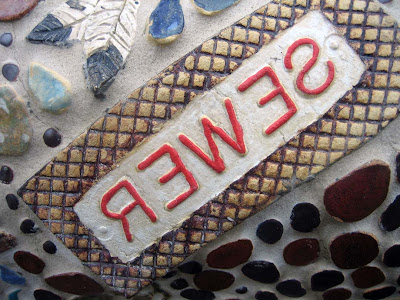 Exquisite. Sublime. Surreal. Urban. Funky. I might give any or all of these appellations to this tile. It is also disturbing and just plain wrong. First offense: It’s sdrawkcab. Second offense: It’s that way on purpose.

It’s sited very noticeably on the front seat edge of Smell on the Five Senses Bench, which might be its third strike. Where are we, really? Looking at a mosaic bench…or trapped in the SEWER looking out at the illusion of a mosaic bench? A man dreaming of being a butterfly or a butterfly dreaming of being a man? And what the hell is that awful smell? No, wait, don’t tell me.

Saving graces: it is still readable, still a sign in rectangular format, still calling up connections to its placement.

It is the work of a vigorous, clear-visioned young man, who I only can recall as I. In the course of the semester (and maybe two) he gathered countless clay slab impressions of similar industrial signage and textures: High Voltage, high boltage. Diamond plate, screws and screens. He used these industrial textures loosely in nearly every asymmetrical vessel and sculpture he created, and left several dozen impression plates behind.

He was clearly under the influence of a certain sensibility. My memory of I is of him in constant motion on an enthusiastically urgent quest for the discovery and capture of every found version of this sensibility extant. Similar to a treasure hunter or to any other collector of naturally occurring phenomena, he believed the next best captcha was just around the corner. He cracked great jokes and sometimes talked to himself.

What rests stuck here on this bench is only semi-disturbing when compared to the range of sculptural vessel fantasia he concocted with his collected findings. It is completely tame compared to the intensity of the hunt, which probably was more of the point. And that gets me thinking about artistic process, for some truly are happiest in the Concept and Gathering stages and pass through Execution, Completion and Assessment quickly in order to go hunting again. That was I to a T!

Where is I now? Still in town? Gone to art school?  Traveling?  Working this concept (which actually has lifetime potential) or finding it both too obvious and too obscure to ride much longer than the time he did? What rabbithole cover did he sneak under and go down?  I would love to know. Matter of fact, I think I will make some polite inquiries soon.