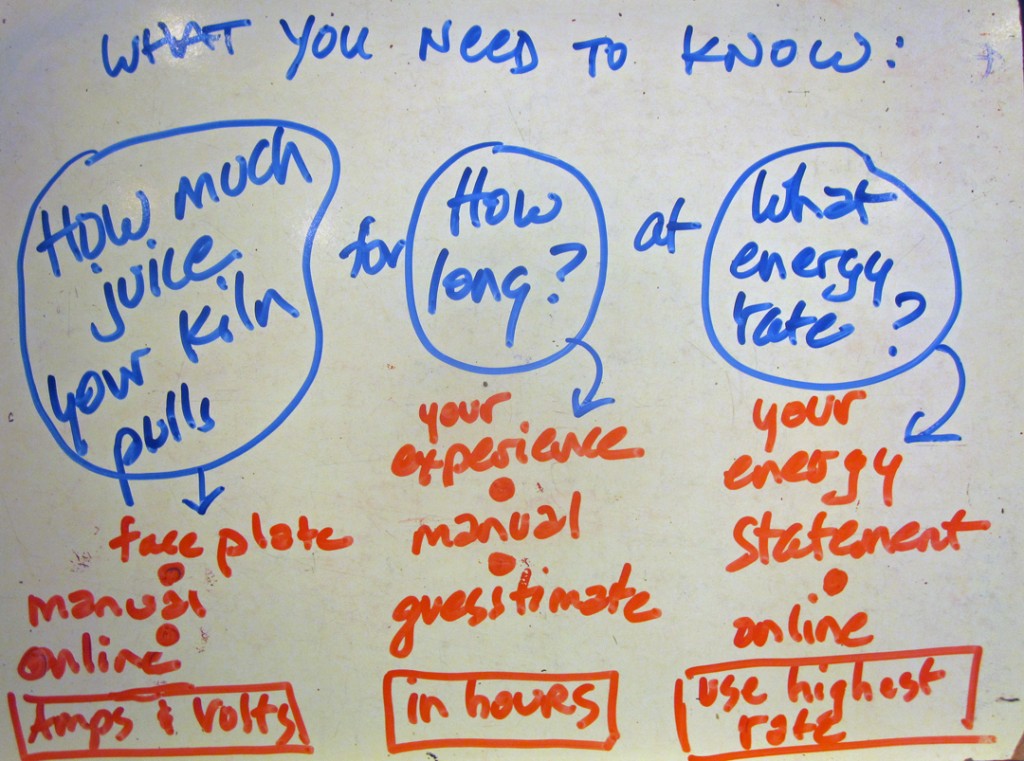 Yes, it involves some arithmetic. Some dividing and multiplying, even. But you can DO this! It’s NOT Rocket Surgery, so unroll those eyes and get empowered.

I did this for each of my kilns a year ago and it ended the anxious little mystery of how much I was spending on each firing.  I also happily discovered it was about 1/3 of what I thought it was.

As rates fluctuate seasonally, I probably should do it twice a year as a general practice, but right now I want to know because I have a new and bigger kiln and I want a reasonable guesstimate for it before I even fire it the first time.

The Big Idea is to discover how much electricity your kiln uses, for how long, at whatever rate your electric company charges you. In these examples, everything is laid out generically, and then there’s a Real Numbers Example as I apply the formula to my new kiln. Grab a calculator, a pencil and some scratch paper and come along with me. 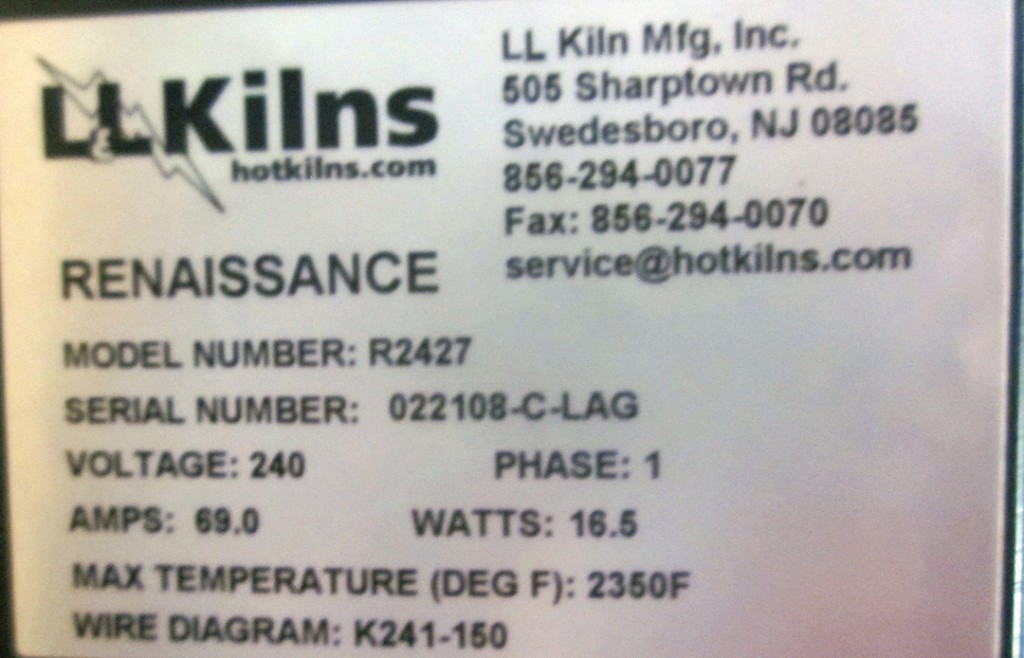 Look on your kiln’s ID Plate, somewhere on its outside. Or online or in the Manual if you have it.

You need the Volts (aka Voltage) and the Amps (aka Amperes) numbers. Don’t worry about what they mean if you don’t know. You only need the numbers. Get them first.

SECOND: Find out the Kilowatts of your kiln 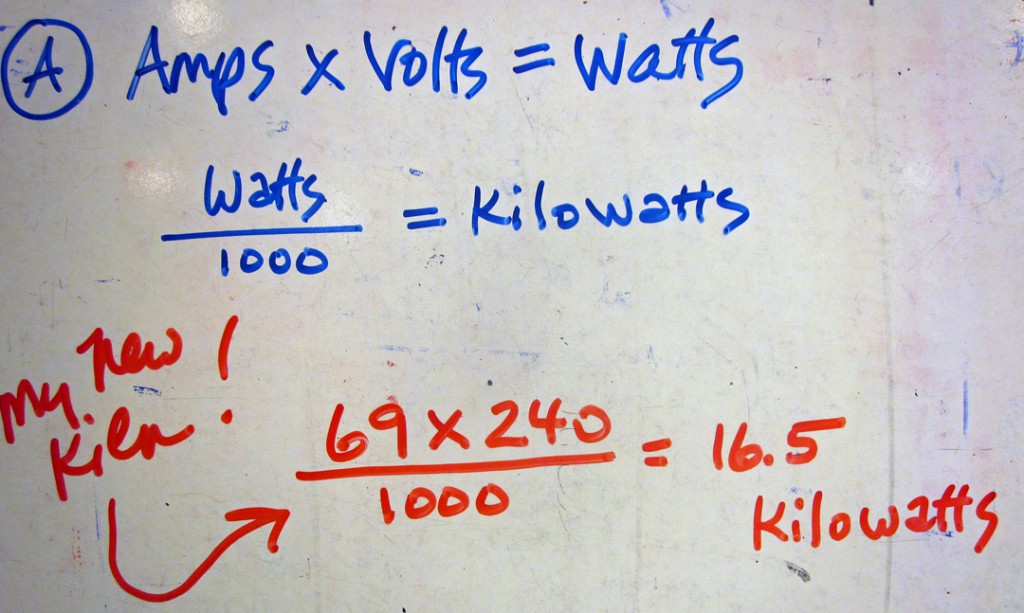 Multiply your Amps and Volts to get Watts. (Even though I did this, you can see it stated on the ID plate, too.) Divide by 1000 — or just move the decimal over three places to the left — to get the Kilowatts.

Notice the red writing: it’s the real numbers from my really new kiln.

THIRD: Get real on your firing time 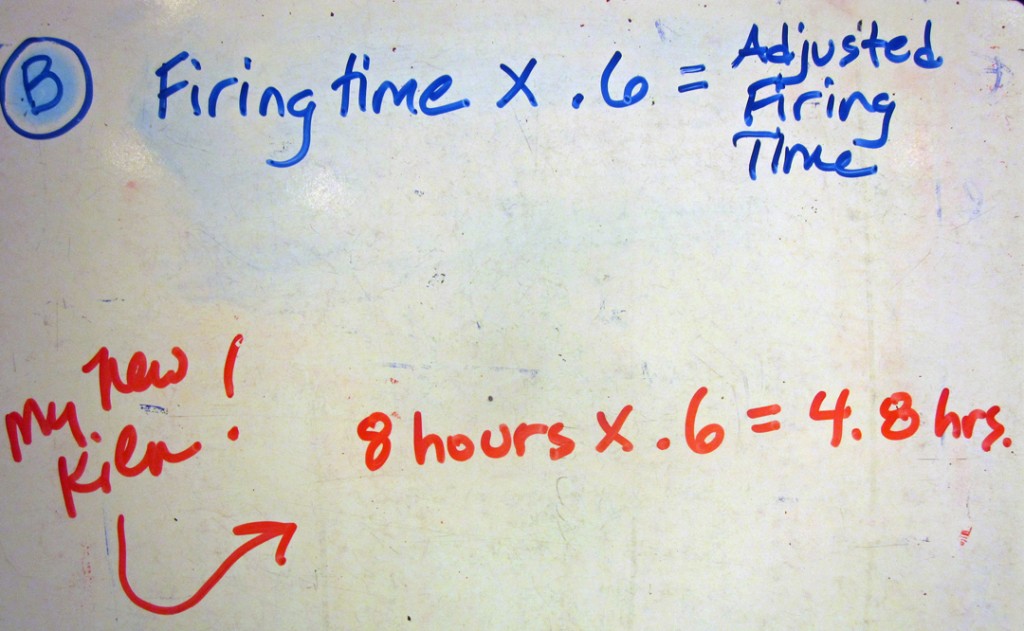 Figure out a firing length. I go with the highest temp and the longest typical firing time I am likely to do. In my case it is a normal speed Cone 6. I actually timed my old kilns from start to when the kiln sitter fell. You can guesstimate. You can see if your kiln’s manual talks about it. My new kiln’s binder did, so I used that.

You need to reduce the firing time length because all the elements are not on for the entire firing, so the kiln it not at full juice. Most of the sources I read when learning about this formula suggested an Adjusted Firing Time of about 60% of the actual firing time. So multiply your chosen firing time by .6 to get the How Long number. 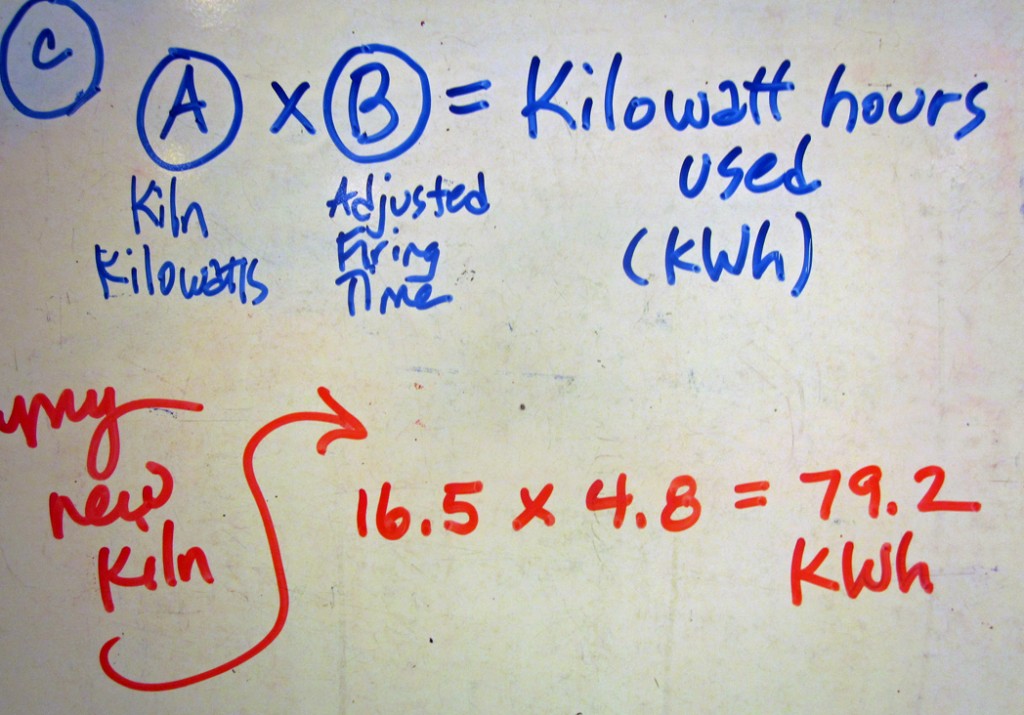 You can find out how many kilowatt hours are in a typical firing by multiplying your Kiln’s Kilowatts by your Adjusted Firing Time. Save this number for the next step.

(And you arithmetic champions can go for the Triple Dog Dare and skip this step for the final one, in which the product of all three of the magic numbers you have gleaned is revealed.)

FIFTH: Get your Electric Bill and pick the highest rate they charge you 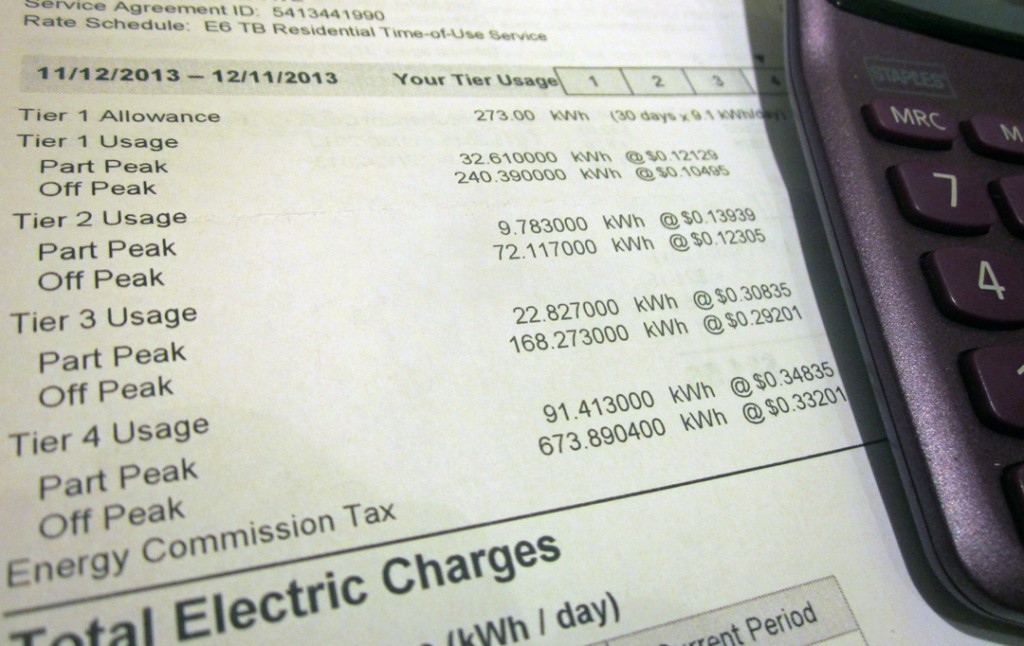 Yes, this is the most tedious reading, but down there at the bottom of my Energy Usage is the number I seek: the highest/nearly highest rate I am charged. I only fire my kilns at night (Off Peak) so I used the $0.33201 per kilowatt hour (kWh.) 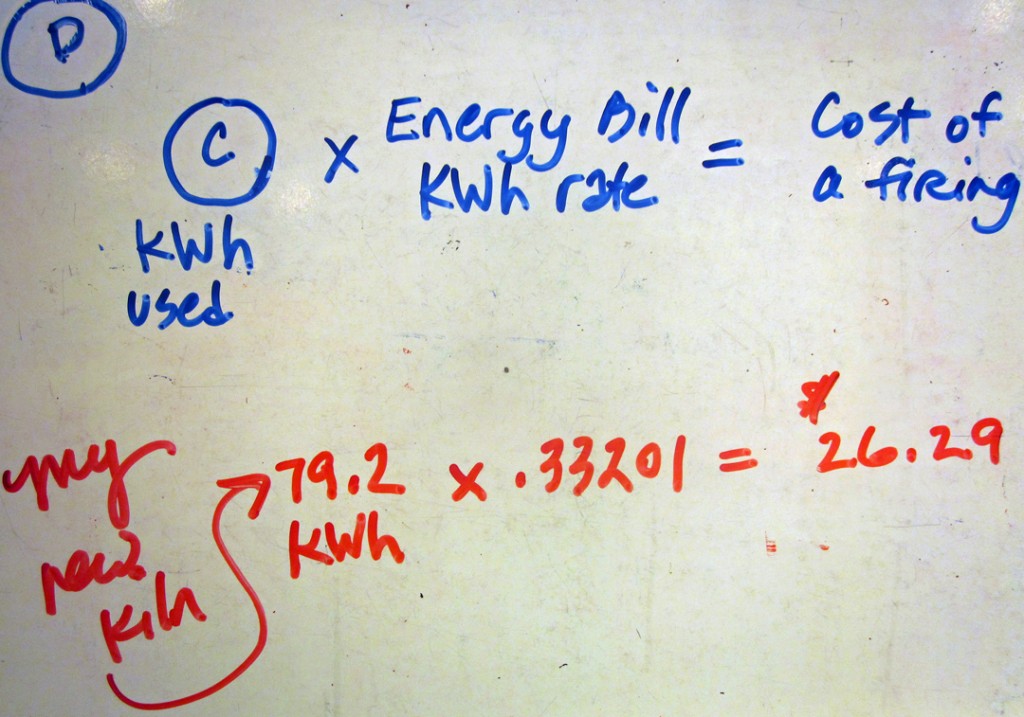 That’s it: Your three numbers (two, if you skipped a step) multiplied together, give you the dollars and cents cost of your electric firing.

See, not hard….and SO worth it!

The whole of it is below. Didn’t want to scare you off with that image first. 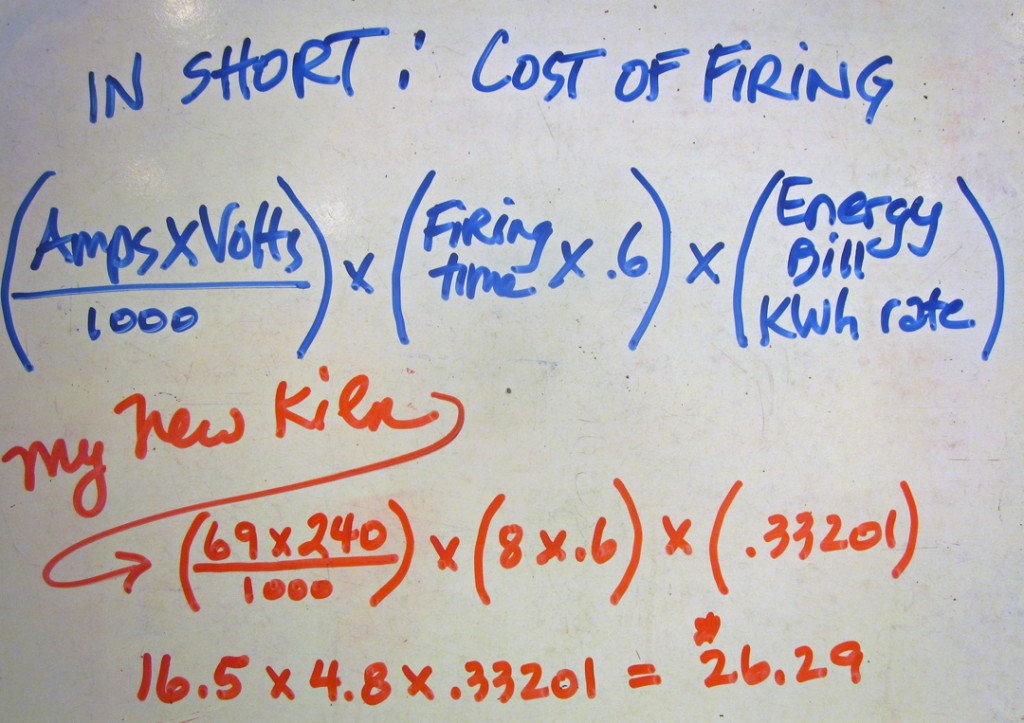 –Liz Crain, who wholeheartedly believes in understanding even the sticky parts of this clay stuff. She also knows that if you multiply your kiln costs by the number of times you fired it in a year, it will tell you how much to reimburse the Household Account. And if you divide your firing costs by the cubic footage of each kiln, you will see it is eerily the same for each of them.