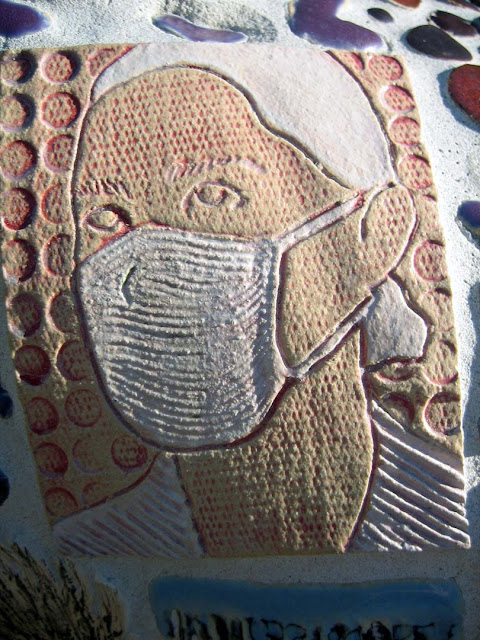 For all the tiles on the Five Senses Bench that revel in glorious sensual experiences, there are a few in each area that speak to their lack, erasure, or pain, and, in the case of this haunting tile, of their conscious need to be modulated or even forbidden.

This tile was certainly more than its maker bargained for. JP was openly enthusiastic about the bench and its evocative possibilities. He fairly quickly chose this image, finding it creepily amusing.  His artistic sensibilities led him to cut it in a stand-alone rectangular portrait format and to add the circle pattern background behind the figure. While most tiles need the canvas imprint pattern — made when the wet clay slab is first rolled out — to be smoothed, the fact that JP left it in place (whether through intention or oversight) adds a certain appropriate screen of tactility that is both decorative and a tad forbidding.

It’s basically its own work of art which happens to be attached to another work of art. That winds up creating an isolationist stance in both narrative and actuality, most assuredly adding to the work’s emotional power.

I originally had gathered this image thinking it would be placed on the Smell area. But that was not JP’s take on it: he wanted it on Touch. So you can find it rounding the front edge of the seat in Touch but closely bordering Smell. This placement always causes a blip on my cognitive radar, further adding to its uncanniness.

In the end, this kind of medicinal mask is more about Touch anyhow: not being touched by breath, not letting airborne germs touch one’s lungs. Not letting any stray objects enter or leave the mouth. The mask-wearer’s eyes are disengaged and distractedly looking up. No smile or frown can be read, therefore No Emotional Touching allowed either! Sterility on steroids!

And JP kept the palette painfully simple. Bare clay, lots of white with a subtle linear texture and those incongruous blood-red polka dots with a veil of smaller canvas dots over most everything else.

This tile winds up being a psychological study of nearly Jungian proportions. It is a strong guardian of the Shadow, the Forbidden, the Anti-Sense and it’s very hard to divert one’s eyes once it gets you in its grip. Must go gaze at it again soon.