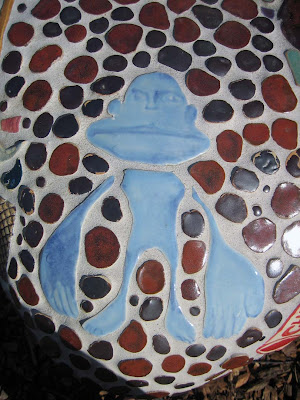 Here’s an odd little blue guy–seems more like a guy than a gal, right, even though he is Ken-doll smooth? You can locate him on the fourth corner/knee area of the Five Senses Bench, between Hearing and Smell.

Some of you may recognize the odd little blue guy as a sensorimotor homunculus, a representation of how our cerebral cortex perceives information from our physical body, only partially based on the number of nerve endings and capillaries that are present.

The science around this is fascinating because it delves into the nature of consciousness. If you take a thoughtful moment to gaze at even this simple of a representation, it is a tiny leap to realize just how literally Hand-to-Mouth our existence is! Are we really very much different from lobsters?

There are other alchemical, philosophical and even psychological versions of homunculi (the plural!) and they seem to hold the idea of the person within the person, the man in a lab beaker, the boy in the bubble. What wholeness lies within? I’ll let you explore those threads on your own. For now, let’s just keep it to this particular physical representation and its place on a Five Senses Bench public art project.

We haven’t really talked about the public art part of this project, but even in the beginning the idea was to place this bench somewhere on Cabrillo’s campus, and it was understood that it would be visually acceptable to nearly all viewers. You know: no gratuitous violence, gang symbols, pornography. That was playfully easy.

When the bench was still under construction, I had a teacher from a nearby school, who was scouting a field trip for her Kindergarteners, ask me to cover up a few tiles: the knife, the small pile of poo, the mermaid’s boobies, etc.  I obliged her by taping over them for their visit, but I felt compromised and lousy about it and vowed never to do that again. The bench was not being installed on a kiddie playground, but a college campus!  Let’s keep it acceptable to adults in a semi-public place and never, never, never censor it again!

If you want the most up-to-date, scientifically accurate representation of a sensational homunculus, though, it must include the genitals, thusly: 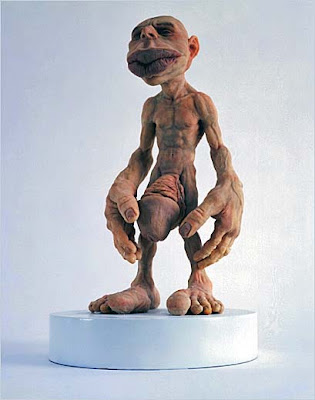 Oh, my! That changes things! Attention teachers at nearby elementary schools: be glad we did not have this as a model for the odd little blue guy! But really, that bench image, along with all the others, is meant for entertainment and pleasant discussion, not a neurological lesson, and it does that just fine without scientific replication, as do most other depictions of a sensorimotor homunculus out there.

Curiously, though, the homunculus is always male. Would a female be differently proportioned or would the differences just be in the genitals? What would a dog’s version look like? An eagle’s? A lobster’s? Someday we might know this.

As it turns out, the odd little blue guy is a fantastic conversation starter about our physical abilities to perceive the world around us, including what we can touch and see, smell, hear and taste sitting on a mosaic bench while we eat our lunch in the sun and light seabreeze.