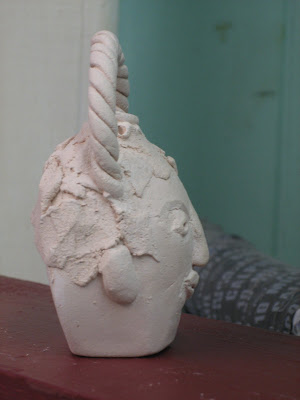 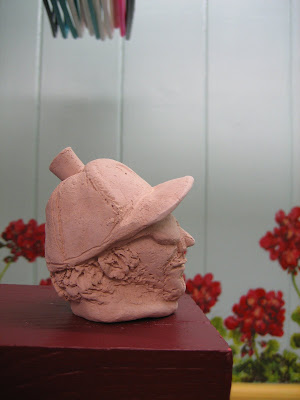 Taking a closer look at two of the small face jugs I am making all this year, as described in my previous post. On top is Week #16 and below Week #20. I affectionately call them Bland Man and The Dude. They both were unusual experiences in the making, and that is is why I am featuring them. (You are able to see front views of them in the group shot from my last post.)

There are typically four faces to choose from each week in the Local Talk column. I am often magnetically drawn to just one and, while I don’t decide for sure until I am actually sitting down with the wet clay to make that week’s jug, it doesn’t change all that often.

Bland Man was my response to NOT getting any buzz going that week. (No offense to any of those folks featured in that column!) This project has always been more about responding to what I see rather than creating a portrait, but even creative responses benefit from close observation of the details. No matter what I did, nothing niggled or intrigued. What else to do but to go with that then? I am happy I did. There is something timeless in this simple little jug. It has whimsy and wisdom and a calm abiding sense that recalls more ancient art. Bland Man, then, is a tiny little joke, really. Beneath that calm exterior lies….

Now The Dude I talked of last May in the Mother-Daughter Double Jug post. If you recall, I was tempted to make another two-person jug, but the angles were wrong, so I went with this covered-up but still full of personality (or attitude?) young guy. And, usually I put the week’s number on the neck or hair in back, but the big ole “20” got pressed into the front of the cap. There is swagger and self-satisfaction in this one for both him and me.

Of the six weeks I let this project ride while I studied ceramics at Skyline College in San Bruno with Tiffany Schmierer, the Thursday columns lined up on my studio wall like fence posts. I spent time studying them yesterday. I mentioned before that I had never seen anyone mugging in a Local Talk column…well, dear readers, I have a Mugger for you. I also have the lovely face of a local classical sculptor who teaches European methods (gee, am I intimidated? Nah.) And there are LOTS of people in sunglasses because it is summer in Santa Cruz! Not quite sure what will develop because of that. We’ll all know in October’s post.

Like I also have said, nearly all are smiling or doing something to make ME smile. Such a gift. At mid-year I am very pleased with this project and looking forward to bringing it into its fullness. I consulted with Tiffany about applying colors and glazes, so I even have some insight into where I will go with that when they and I are ready. It all feels just right.