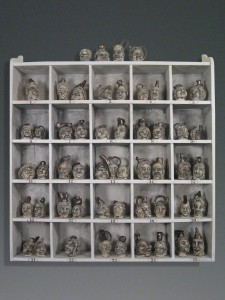 All of last year I gathered the weekly Santa Cruz Good Times and tore out the Local Talk column, selected one smiling respondent to respond to and made a small face jug inspired by it. Most have a sculptural spout and handle(s) and all are functional in that they really could be containers.

It was a daunting process with lots of pauses and I blogged about it fairly regularly: quarterly progress reports, procedural essays, thoughts on completion conundrums.

I did not hurry myself other than with the urgency borne of a curiosity to see how it would resolve, since I did not know either!

After all the pieces were formed and safely bisque fired, I still wasn’t sure how to finish them in order to unify their differing expressions, attributes and even slight size ranges. I also needed to have a display concept, and I felt I needed a glimmer of how they would be formally viewed before I chose the finish glaze treatment. It took time to feel this out.

Simplicity ruled. What you see is a black wash over each piece to bring out the planes and textures as in a drawing. A touch of Radiant Red underglaze was brushed over the week’s number which had been impressed into each piece and at its spout opening. That’s it. Black and White and Red (read) all over.

As for the display, even with a clear concept it was only after much searching that I located this commercial shelf which came with just the right amount and size of cubbies AND numbers too! I brushed red on the numbers and stained the interior with a black wash to pump up the Shabby Chic-ness, thereby unifying both Local Talkers and their habitat.

There is no particular way the faces need to be placed in this shelf, although a few on top and mostly two to a cubbie works easily. Certainly they do not need to be in numerical order!

A year becomes a jumble anyhow, and having the face jugs free to intermingle at last and create a sense of their own relationship and conversation is such delicious fun. A dollhouse for adults in a way.

I am assembling a book of the Local Talk columns alongside individual photos of that week’s finished jug. While I could still pick out the weekly person whose face I used, I have been surprised at how far afield I went from the source photo. It was a complete surprise to me to see how often the gesture and even the hair part of the artwork are a mirror image of the original. And very, very often the gender is interpreted more androgynously, if not exactly opposite, which seems to be “something I do.”

I am including my blogs about the process in this book too, sprinkling them into the rhythm of the year’s making…and it is gotten on to be a year and a half. This post will be included as well. The book-making has even nudged me to write it!

So, what happens next? I have entered the piece into a local juried exhibit and have not heard back yet if it has been accepted. If it is, that creates a path. If it is not, that creates another. Both paths will lead to letting the Good Times know about this work, but each will create a method.

This piece is a unit…all the tiny jugs go together in their display as one sculpture and I am completely happy with that. But I yearn for a series of similar pieces that can fly individually free. I am noticing that I want to do this yearly practice again, making bigger face jugs still based on this Local Talk weekly cavalcade of expression. So here comes 2011, and I am getting ready.