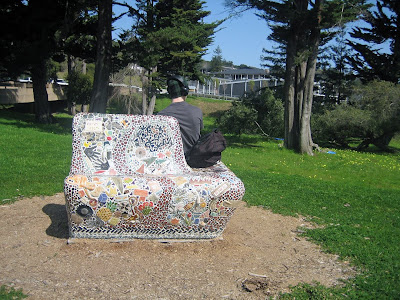 As we wind down to this last intended Thursday’s Tile post, we will get to enjoy some shots of the Five Senses Bench in use in the setting of the still-new Art Complex quad area of Cabrillo College.

It is safe to say that very few of the students presently attending know the history of this artwork, because it took eight semesters to be completed and five before it was installed. Instead, they are free to enjoy it for exactly what it presents itself as: a groovy, arty stopping place, especially on a sunny spring day. They are now writing the continuing history of the Bench.

The young man above, for example, was lost in his music and gazing at what’s called The Art Glen, a wild bowl of cypress trees and large bushes, likely dating from the days of the Sesnon family’s summer home.

I wish I had photos of the environmental dance troupe which used the bench as a prop at last October’s Cabrillo College 50th Anniversary Open House. They posed and leaped and shimmied all over it. Not likely to happen again soon, at least in such a trained way.

Another missed photo op was when the nearby preschool took a field trip to the Bench. Those tykes were crawling, exclaiming and pointing to everything they recognized, and being directed to new imagery by their teachers. (Wonder if they did see the pile of poo at preschooler eye-level in the Smell area?)

All this is what should happen to public art. It is looked at, used, commented on, photographed, adapted and experienced. It can also be graffiti-ed, “harvested” or in other ways defiled, although artworks are generally left alone, and ceramic tile is pretty bulletproof. (My dad said the life-sized statue of a Confederate soldier that stands in the town square of his tiny southern Alabama hamlet usually had a cigarette inserted in his mouth. When I was mentioning this to my mom, she said the statue of The Thinker at her Wisconsin high school did too. This bench has its own cigarette already, though…Whew.)

Instead of mooning over unique lost shots, here’s another more familiar sight: an elegantly perched reader, carried away by her book. 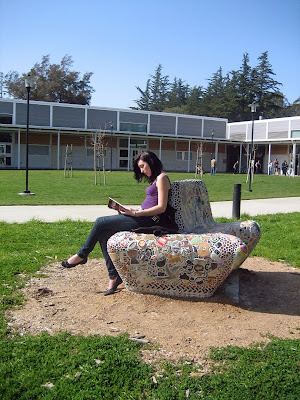 Plenty of times, too, the bench is a meeting place. It is sited in a crossroads location, yet off the traffic pathways, making it easy to locate and yet still have a relatively un-jostled private conversation, like I found these two friends below having. It just might be a defensible space. You can see how much room is around it. 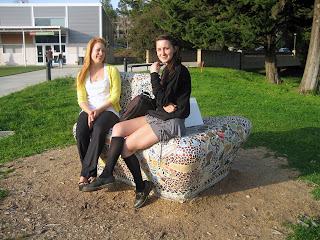 It feels safe enough to stretch out and nap on, as in this completely impromptu shot below. With two distinct sides, sharing a common back and one connecting end, who knew it is also a horizontal love seat? And it’s up off that damp grass. (Although watch out if has rained recently, the back of each curvy seat does not drain!) 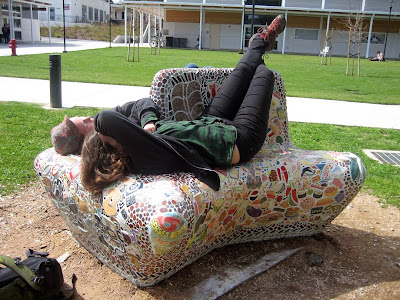 The loungers were not even disturbed when I asked a student I had not seen in many a day, LM, to point to the red onions and head of garlic tile he made for the Taste area. This thing will outlast us all, and every semester we told potential tile-makers they could bring their great-grandchildren to see it. LM must have really listened because he’s back sooner than that. 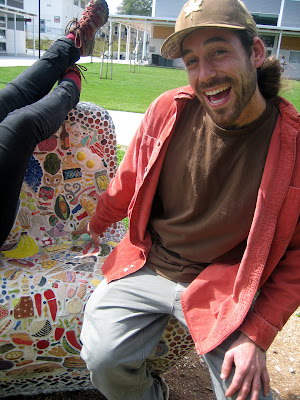 There’s no telling how many tiles are attached to this baby elephant. Thousands upon thousands, is my guess. But I can tell you accurately the twenty-six posts of Thursday’s Tile stack up like this: Hearing: 2, Sight: 2, Smell: 3, Touch: 5, Taste: 7, and General: 7, including this one.

And I can count one tile maker who stands out among the many hundreds, just because she worked long and hard all over this behemoth. From the “upholstery” pattern bottom edge, to the title tiles in each area, to design advice, to grouting the thing, she was there. You know her as the enthusiastic, opinionated, unsung “DP.” And there she is “standing out” right below. 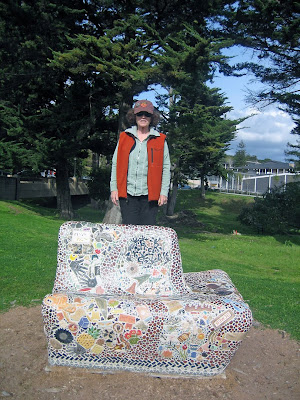 When I was with DP last week taking this photo of her, she casually but earnestly said something like, “This bench needs some more things around it. It’s too bare over here.” The original plan did call for three pieces, two flatter table or hassock shapes beside the bench, but the bench proved enormously enough. At least until now.

DP drew in the dirt next to the Bench with her foot, outlining a shape, and her hands described an approximate silhouette. She talked of its construction and of it having both larger and planned-out tiles. She said she and her art partner would build the frame. She said it could be finished in place, right there in situ. She said there also needed to be a “carpet” of horizontal stepping stones around it all. She said.

I listened. I got kinda excited. I said OK!

We have plans…and as soon as they begin to actualize, I will be back, blogging about that whole process. In the meantime, I have a tiny vacation lined out. Thanks for reading Thursday’s Tile and the rest of Soul Ceramics.