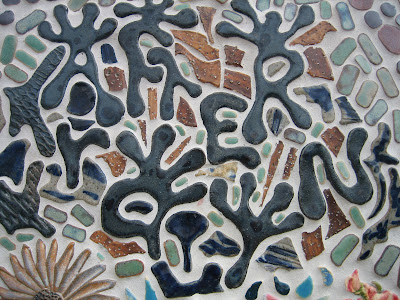 This intriguing array, one of the oldest intentional groupings of tiles on the Five Senses Bench, was not only a fantastic attempt to cover a lot of square footage, but also a fun way to play with word shapes enough to evoke their meaning visually. (A new kind of font, I guess.) Even though it’s huge and on the back area of SMELL, I truly wonder how many folks miss it, thinking it is just a fun pattern.

C (I’m not remembering his last initial right now) took a lot of pains to develop, cut, glaze and arrange his two words. Can you read them? Maybe you can make out “AFTER” pretty easily, but the word below it is harder to get because he changes to lower case and that third letter looks like a Y or a W. Those four “splashes” attached to its top create the diversion,  but it is the letter “I.” Now can you read it? AFTER RAIN! What a great smell that can be!

I have heard that smell is our most primal sense, brain-wise, bypassing everything and directly engaging the Lizard Brain, meaning there is strong emotion/memory tangled with it. See if you can recall your own version of After Rain right now. I get a wet asphalt playground smell, but I hope you get something more woodsy-earthy.

Did you know there is actually a name for what C wants us to olfactorially recall: petrichor. What a lovely ancient-sounding word, but apparently only coined in the late 20th century. When I ran into this word, months and months after C had moved on from Ceramics to his other transfer course requirements, I wrote it on a piece of paper, and kept it with all my bench-making supplies. C and his girlfriend happened by one afternoon to check on things and we had a sweet little petrichor party!

As a matter of fact, I now never smell the world After Rain without thinking “petrichor-C-bench” so I guess that is in my Lizard Brain now, too.