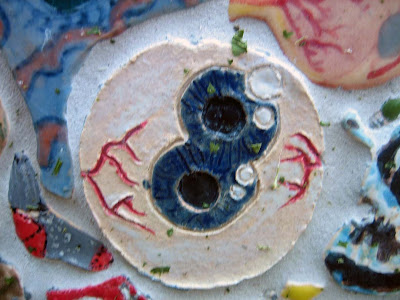 And if you have an eye like this bloodshot mutant double-wide, maybe you only need one! What follows is a look at a few of the tiles on the Sight Area of the Five Senses Bench, the only completely flat side of the project and the one you can most easily take in in a glance. It hasn’t gotten a lot of coverage here at Thursday’s Tile, for some reason. A few of the other posts about tiles from this area are of the purple cow, the braille tiles, a holiday essay and one of the body parts of each sense area.

It is natural that there are a lot of eyes in the Sight Area, just as there were a lot of hands on the Touch Area. But just as Touch morphed into Feeling, Sight morphs quickly into Insight and the Mind’s Eye. It comes from imagination (like the purple cow or the doubled eyeball) and inner vision, like SR’s lovely rendition of the third eye below. Many of the rest of the eyes are Buddha’s or the Eye of Horus. Inner eye awake and aware; person meditating, dreaming, seeing inside. 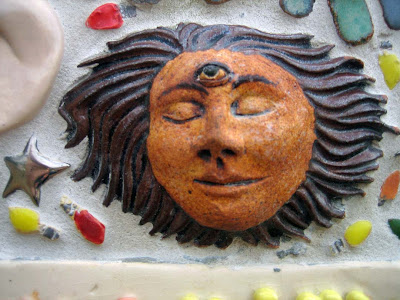 Below are DP’s label tiles for Sight, and at their bottom is a glimpse of Superman, the Man of Steel with the X-ray Vision. But wait, he has many vision powers: “x-ray, heat-emitting, telescopic, infrared and microscopic.” I did not know that and bet you did not either. 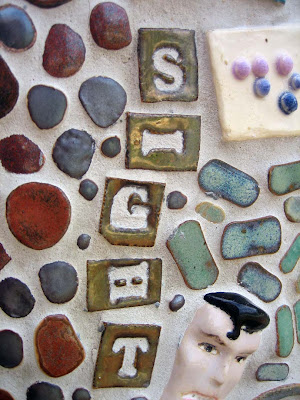 Maybe Superman’s heat-emitting vision melted the clock tile to fit the top curve. Regardless, it is a take-off on Salvador Dali’s most famous work, The Persistence of Memory, 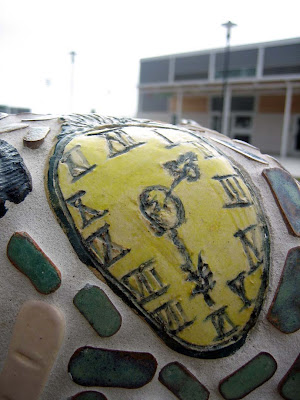 which just so happens to be one of those images that “once seen cannot be unseen,” and functions as a largely recognized cultural reference, much like Munch’s The Scream. I just can’t tell if the hands read 10 after 6 or 2:30….and the correct time probably does not matter in the slightest if your clock is limp and drooling. 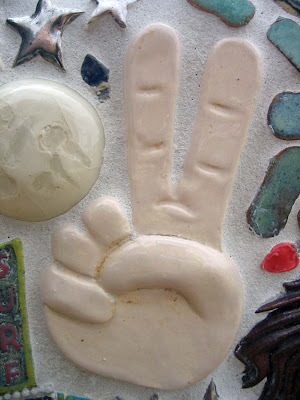 Above we have RJ’s nearly famous hand, forming the modern-day hand sign for PEACE — or is that “Make it two beers?” It was originally planned for the Touch area, joining all the other hands, but even the maker did not notice it had six fingers until it was glazed and ready to be attached. We laughed long and hard about that and put it on the Sight side, both as a reference to all kinds of sign language and as a visual pun on ourselves and anyone else who really sees what they’re looking at.

The next three tiles have to do with noticing how the world has changed in even the relatively short time since this bench was conceived (2003), worked on with concerted effort (2005) and finished (2007.) In that time, we have transitioned from using film in cameras to all digital. Film is now exotic stuff, for photog students or….film-makers! But here’s a lovely travel series of a sunset somewhere, nonetheless. What used to be a symbol of taking pictures is now a smartly framed quadtych. 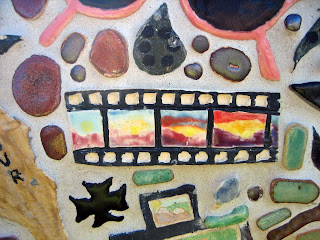 And then there is the old incandescent light bulb, symbol of the bright idea. Will the cool white spiral CF bulb ever quite do that, even though it is the brighter idea of the two? (And those teeny holiday lights are now all LEDs!) 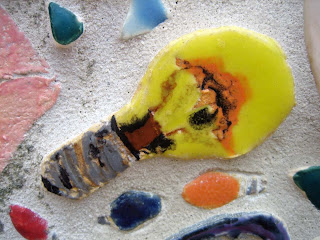 And while the shape of TVs has morphed to the high def flat screen, and satellite/cable is the norm over rabbit ears/antennae, at least the broadcast nonsense is still just as colorfully effervescent as this tile. 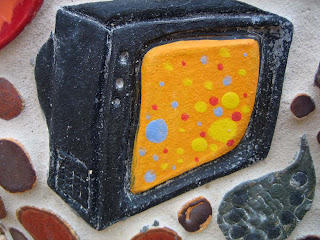 But here is something that has not gone away, even though there were dire predictions with the advent of VCRs and DVD players: the movie theater. This tile is a nostalgic rendition of the actual marquee of the Surf Theater on Irving Street in San Francisco, which operated for almost 60 years in some capacity and wound up being an important refuge for seekers of art films and even employment for some of us. If you think about it, the movies engage so many of our senses, including those of imagination and feeling (emotional senses!) How about gratitude? Thanks Surf Theater! Thanks KM for this tile and ES for the silver stars and full moon around it. Thanks. 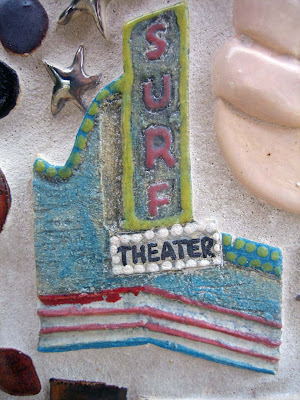