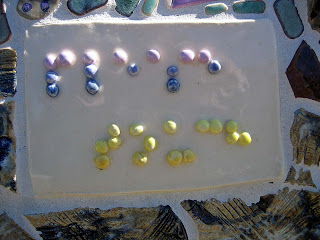 There are really two tiles to explore today. The one above is on the back of Touch area of the Five Senses Bench. While it looks like those old-fashioned candy dots you would peel off of some paper, it is actually Braille, meant to be touched to be understood! And it spells out, “PLEASE TOUCH.” That alone makes it a wonderful addition to Touch, and it we could leave it right there.

But we won’t, because there is a similar tile on the Sight area of the bench, as you can see below. 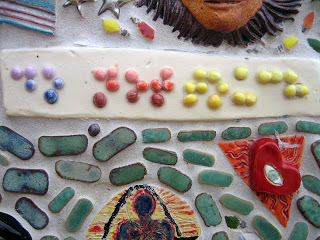 More candy dots, spelling out something you need to touch to understand…unless of course you can sight read Braille. (Oh, and you can see a few other tiles nearby that all seem to be referencing Inner Sight, a wonderful adjunct in this section, similar to KB’s insistence on tiles expressing feelings in the Touch area.)

So this tile in the Sight area is a visual/touch/Braille prank, meant for the unsuspecting blind person. And I got to play it on my blind friend MJ!

It was several years after the tile was applied that MJ and I were exploring the unfinished bench at his request, because he is – besides being a great teacher, a runner, a musician and storyteller – a consummate ceramics artist.

He touched and I described. After a time, I directed his hands to the PLEASE TOUCH tile. Normally Braille is so tiny, he had a bit of trouble deciphering such Brobdingnagian dots, but he did and liked it a lot.

I had done the set-up….Tee Hee.

MJ likes to laugh and is achingly corny. I could not wait for my next move. I casually said something like, “Well, if you liked that one, try this…” and moved him and his hands around the corner…..

I wonder, because these tiles have such a special audience, who else has gotten this joke. And, for that matter, who else just thinks they are half-eaten candy dots. Either way.