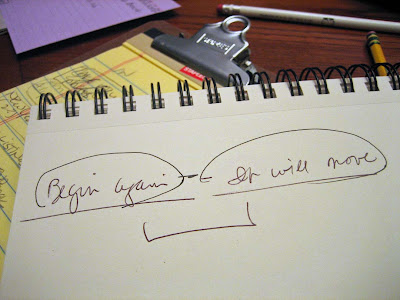 This post is a living example of itself (aside: would that make it a Strange Loop?) and I couch it purposely in the belly of the New Year, a very hard time to ignore the call of renewal and beginning again. I also couch it in the time of a retrograde Mercury, an esoteric period of reviewing and re-doing, especially one’s words and communications. The ramifications of Starting Over is a complicated, book-worthy topic, which impels me to distill it into a rough “Whereas and Therefore” Resolution format instead of my typically wordy prose, which would take…..ahem…..a book!

Whereas I have read in more than one place that the Four Most Dangerous Words in the English language are, “I already know that.”

Whereas I have “taken” (by virtue of my continued volunteering and actually listening to every lecture and demo) Art 7A Ceramics: Handbuilding at Cabrillo College around 27 times.

Whereas I have learned it is pretty much impossible to reproduce an artwork exactly, whether it is a master’s or your own.

Whereas I have watched A Christmas Story at least 47 times, Harold and Maude, 15, Brave Little Toaster, umpteen-zillion and have read Norma Jean The Termite Queen at least five times, enjoying each repetition (mostly) anew.

Whereas I recently learned that the creators of Blue’s Clues, a Sesame Street-like program on Nickelodeon, were initially so short of cash they repeated each program every day for a week and the series was a hit precisely because of that.

Whereas I have experienced the phenomenon of learning a new word or concept and then hearing it or seeing it used all around me.

Whereas once I understood the nature of neuroplasticity, I felt much freer to go deeper into what I wanted to know, over and over, knowing the truth of Heraclitus’ words, “You can’t step in the same river twice.”

Whereas my original teacher of the Creative Process, Coeleen Kiebert was fond of saying, “Begin again, it will move,” (that’s a photo of my actual notes from that class up top) and she emphatically honored all steps of this process, including the stages that appear as blocked or fallow, such as Gathering.

Whereas the Universe is ever-expanding and our cells are entirely replaced every seven years, yet still retain our true essence.

Whereas I notice that if I cultivate my dreams and make efforts to write down dreams and dream snippets and the hunches and connections I get from them, eventually and upon review, I can make meaningful connections because of the recurring themes and images.

Whereas the minute I began considering the value of beginning again and repetition, I saw these wonderful blog posts at Mildly Creative by Ken Robert: Themes Familiar, and Why It’s Good to Go Back Where You Started, that exactly said what I wanted to here. (And now I don’t have to!)

Whereas I am loving words such as, “let me repeat that….” “you can say that again!” “lest I repeat myself….” and “it bears repeating,” especially when said with enthusiasm and wonder.

Therefore, be it Resolved (solved again?) that my enthusiastic learning and re-learning in all things with heart and soul truth in my life continue wild and unchecked this entire year because I stay open, present, cognizant, energetic, healthy and able to respond.