Over the years, I’ve done no more than a couple of commissions. As I have written in the past (Commissions Are Like Picking Scabs,) while they flatter – and pay well – they also hijack my one-seater creative glider. As a result of that, I’ve turned down more commissions than I’ve taken. My practiced, wistfully sighing response is a version of, “Oh dear, my studio schedule doesn’t have room for anything else…too bad there’s only one of me…” It’s worked like a charm for years. And then along came this request.

A few months ago, a gentleman emailed me from England, thrilled with having stumbled upon my website’s pages and pages of rusty cans, and cheerfully asked if I still created ceramic conetop beer cans, and, if so, would I be willing to make one for him? He’d pay the going rate along with international shipping and insurance. He mentioned internet articles about him (‘Dullest Man in Britain’…,) and it turns out he’s well known for having the largest collection of exclusively British beer cans – over 9,000! – which he has since sold off and donated to packaging museums and the like. He’s kept only maybe 1500 of his favorites, which are still packed away as he’s moved house and downsized too.

Instead of out-of-hand rejecting it, I pondered his proposal all morning. I just about trotted out my de rigeur line of faux regret, minus the sighing, when something bubbled up in the solar plexus that felt adventurous and just right, and so instead, I threw caution to the winds and replied, “While I normally don’t do this – yadda, yadda, yadda – I’ll do it for love and not money.”

I would generate a small run, perhaps a six-pack, decorate them as he desired and send the one(s) that met my standards, all at my expense…if he’d be willing to donate the equivalent monetary values to a favorite local charity, preferably one supporting the arts, literacy or the environment. He said yes and he knew just the charity, as it has served his family well in the past.

The rest of our interchange covered details involving photos of his preferred rare brands and the facts related to my truthfully crammed studio schedule. The stickier details: British conetops are rarer than rare (many were melted down for ammo and such during WWII) so I cannot easily or cheaply examine a real one, and they are 9 2/3 ounces – not the US 12-ouncers I’d made – so I would have to create and test a whole new pattern as well. We traded this sort of info for a few more days and then off we went. Me to my “studio schedule” and he to waiting patiently for it to open up.

Since then, I have made a whole new body of knitted porcelain work and completely redesigned and outfitted my festival booth to suit it. I had my debut presentation at the ACGA Clay and Glass Festival in Palo Alto last month – photo up top! – and it was so well-received that I needed to return to the studio, mop up and begin immediately to replenish my inventory for October’s Santa Cruz Open Studios Art Tour. I couldn’t even see my way clear to the end of the week, much less to writing England with the need to reschedule at a completely uncertain time.

Thankfully an email came this week with a second cheerful inquiry. “How are you? Haven’t heard from you. Hope you’re still interested in this project.” Instead of feeling guilty and obligated, I felt elated at the care and continued interest. Because I shared it! I told him I was still on board “in heart, but not in hands just yet.” That I had this new looming deadline, that I was doing daily stretching and rehab moves to stay in shape for my knitting marathon. That I had planned a couple of weeks away and out of the studio at the end of the summer, that I was now looking at the end of October to begin his unique commission.

And here’s the thing: with generous kindness he understood. “I shall put my enthusiasm on the back burner, whilst you crack on (with your more important/interesting stuff.)” So, with this unusually welcome commission merely postponed, I’m adding “crack on” to my daily lexicon and am stepping away from the keyboard right now to do a serious rendition of it.

–Liz Crain, who, when mentioning there was regretfully only one of her to do her work and she could use a clone, also asked if he knew of the comic strip Calvin and Hobbes and of Calvin’s Duplicator, a cardboard box in which Calvin made another Calvin to do his homework and clean his room? He hadn’t! So she suggested that “While you wait, please find and enjoy all the Calvin and Hobbes by Bill Watterson you can; one of the most well-drawn, imaginative, philosophical strips ever to be: a boy and his stuffed tiger (who’s real to him) both archetypal and oh-so-true to life.”

And with Summer comes the Festivals and Exhibits! There is definitely a cycle to making artwork and then sharing it with the world. And because my work has radically changed, I’d like to add to my last post with a peek at the newest pieces on display now in a few shows and the body of knitted porcelain work I am busily creating for Summer and Fall in-person exhibits.

END_OF_DOCUMENT_TOKEN_TO_BE_REPLACED

I’ve been cocooning myself in the studio for a couple of years now. Gestating, trying all sorts of new/old/new again approaches, bringing them along to the fullest expression and then, having learned all I was interested in learning, dropping them cold. Sometimes that’s called iterating, sometimes it’s called a major dry spell, spinning one’s wheels, procrasta-productivity, even – oh no! – an artist’s block (which I actually don’t believe in.)  I never felt stuck in this creative walkabout. Impatient to get on with it, yes, but never stuck. Breathe in, breathe out.  Anyhoo, since last summer I have been testing and forging ahead with the myriad of ways to combine clay with fiber arts, specifically knitting/crocheting. Once I entered the formidable front door, it proved to be a mansion of many rooms and I’d like to take the rest of this post to share annotated photos from my visits to a few of them.

END_OF_DOCUMENT_TOKEN_TO_BE_REPLACED

I have a skittish relationship with naming my creator-self.  Saying I’m an Artist, Artisan, Craftsperson, Ceramicist, or even just the tony nom-du-jour of Maker, bothers me sufficiently that shortly after I adopt one I find it uncomfortably limiting, if not damaging.  While each may work as a signifier in the moment, they speedily run smack into the twin problems of demarcations and assumptions which divert, subvert, and pervert.  The root problem I have with labels is sort of a chicken/egg connotative conundrum. Does the Maker’s making (as a pure process) inform the Made’s meaning?  Or…does the Made Thing (a physical product) make the Maker something (as a byproduct of the product?) Humor me while I iron this out.

END_OF_DOCUMENT_TOKEN_TO_BE_REPLACED

Many exhibits I participate in involve largish groups of artists and a wide range of media.  My heart is with the curators, gallerists, display mavens and workerbees who handle and metaphorically rub the aesthetic tummies of often quite disparate pieces in order to create a cohesive, even inspired, presentation of them all.  There are challenges galore to that effort every single time and I aim to ease their task in any small way I can with pictorial love notes.

END_OF_DOCUMENT_TOKEN_TO_BE_REPLACED 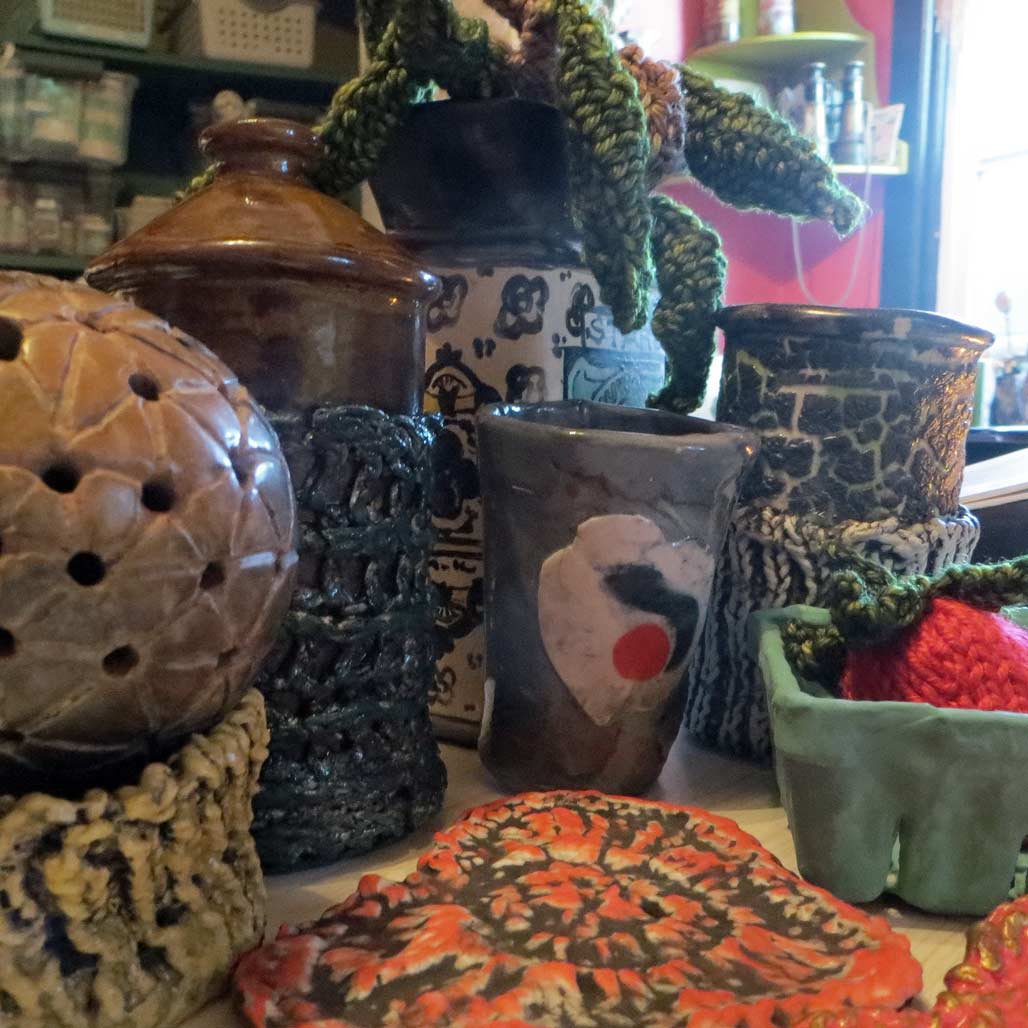 Exactly what happens in a cocoon, that organic black box of metamorphosis?  The caterpillar attaches, spins a blanket, and proceeds to digest itself, keeping only a few “imaginal discs” to generate the adult body parts it will need, and using the rest of the resultant goo for food.  In the months since I have last written in this Journal, I have been in a metaphoric chrysalis, happily sipping my own “caterpillar soup” which I am only now able to take a stab at describing.

END_OF_DOCUMENT_TOKEN_TO_BE_REPLACED

I wanted an iceberg image to illustrate this journal entry about art pricing, but I didn’t want to use stock graphics or to draw one.  Everytime I considered something else, I balked.  It had to be an iceberg.  So, being fresh out of tickets for a North Atlantic cruise, I improvised.  Turns out the head-of-iceberg-lettuce-as-stand-in-for-iceberg-metaphor works even better, as we shall see.