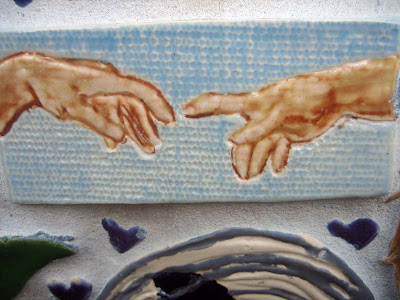 This month, we’re pulling into the station, on our final descent, on the last leg of Thursday’s Tile. Our March Victory Lap is consisting of photo essays focused on each of the five areas of the Five Senses Bench, with one concluding column planned at month’s end. Click on Hearing or Smell to read those photo essays from the last two weeks.

Let’s look at some Touch tiles. There is a lot to see, including some works that show how one tile leads to another. How about life-giving touch? Up top are the famous hands from Michelangelo’s Creation of Adam fresco from the Sistine Chapel at the Vatican in Rome. Yesterday a friend commented that what makes this work powerful is the enormous tension created because the hands are NOT touching. We feel that spark of life rather than see it. 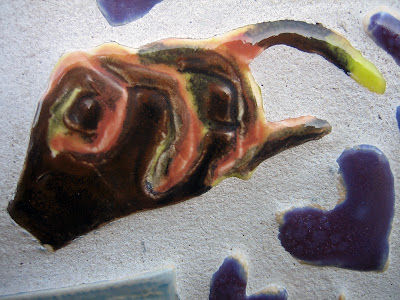 And here is ET the Extra Terrestrial’s glowing finger, the one that heals Elliott’s ouchie and the one that he touches to Elliott’s forehead when he leaves saying, “Be Good.” The movie poster openly riffed on Michelangelo’s work as you can see. I love this kind of resonance, myself. 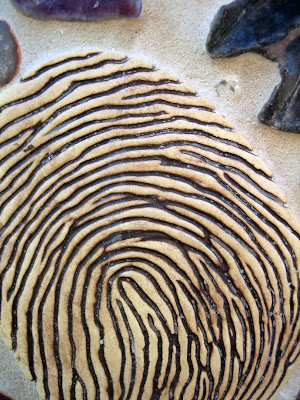 As we learned in the Thursday’s Tile post about the Homunculus, our hands give us the most sensorial information of any part of us, save maybe our lips and tongue. There are many, many hands represented in Touch. There’s this giant 7″ fingerprint, too. I have been wondering who first noticed that none of our fingerprints were the same. Apparently it happened in ancient times. The forensic use of fingerprints is only about 100 years old, though, and nearly all other forms of personal identification are referred to as “fingerprinting,” such as digital fingerprinting (a humorously self-referencing term?!?!) or acoustic or genetic fingerprinting. 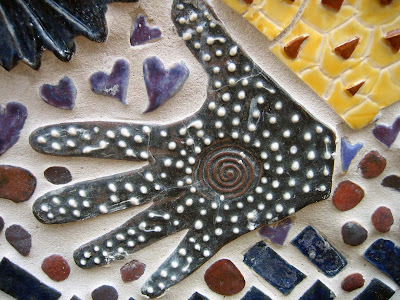 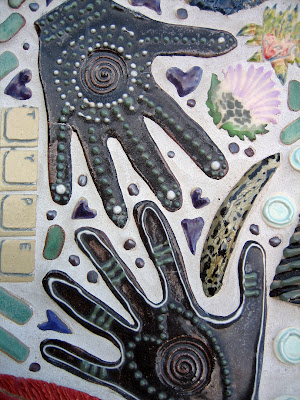 Hand tracings are also an ancient form of decoration, universally found in prehistoric caves, petroglyphs and pictographs. They were also the first tiles made representing this area of the bench. The hand tiles are life-size and contain raised decorations, making them fun to touch. Note the tactility of the pineapple near the top hand and the slug and thistle near the bottom two. 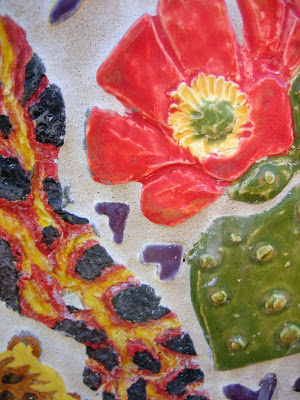 Speaking of hard-to-impossible things to touch, above we have HOT LAVA, as well as some cactus. Have you ever cleaned nopales? If so, you know how insidiously painful one invisible micro-spine can be. Even the pre-cleaned ones are capable of stabbing the cook.

And, thinking of stabbing, here is a cuddly porcupine! Not. They hold their barbed quills flat for mating, but raise them when feeling challenged, so curious dogs get muzzle-fulls quite commonly. Porcupines apparently are good eating, and those quills are used in the embroidery unique to Native Americans, presumably after the “spiny pig” is dead and motionless. 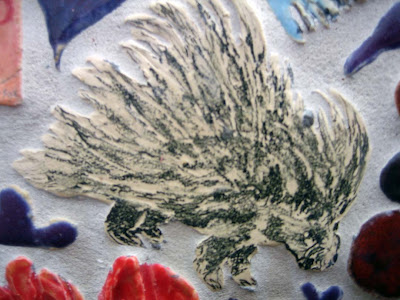 One of our last images is a treacherous trio: a round sawblade, some poison oak leaves and a knife that is glazed so convincingly as to constantly catch me offguard.  I startle and think, “Who left that knife sitting there?????” and realize I have been duped again. (Ooooh, and more cactus!) 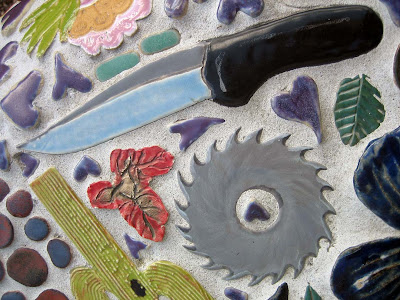 All these sharp and painful images share this side of the bench with the Braille sign “Please Touch.” Kinda ironic. (The Braille “Do Not Touch” is on the Sight side.)

But there is another kind of Touch besides physical: the feelings that touch us. One of my first posts on Thursday’s Tile was about KB’s lips and her suggestions for adding these kinds of images to touch: angels, purple heart tiles, soft cats. I just re-read that post and it brings a tear to my eye too, like this last photo: Sad Eye with Tear. You might think it belongs on Sight, but it is exactly the right crossover tile, made specifically for this area, its narrative adapting to its placement and expanding our experience. A little Touchy, are we? That’s good! 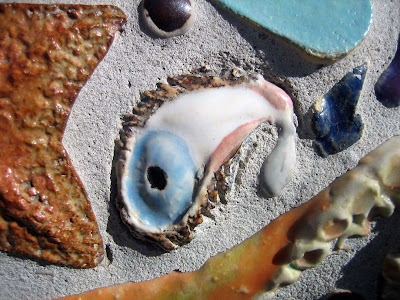