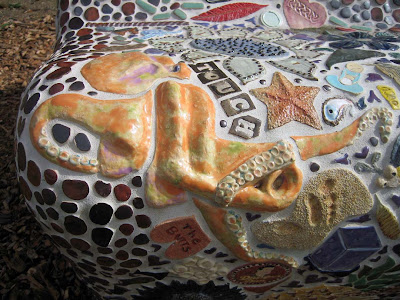 The octopus is a highly intelligent eight-armed bag, capable of taking just about any shape it needs to. What a great choice it was for the rounded corner of the Five Senses Bench in the Touch area. I call these four places the “knees” of the bench and if you go to the FSB link you will be able to see this octo-tile on the closest corner in the whole-bench shot. Oh, and you can read the backstory too, if this is your first time encounter with it.

The woman who made this tile, NB, was quite a meticulous artist who was also studying for her single subject teaching credential in Art. (Which she later accomplished.) Of the time she spent at Cabrillo Ceramics, she made wonderful pieces, very realistic in both form and decoration. Lots of animals: cougars and giraffes, dogs and deer, all expertly executed.

She originally modeled this octo-tile in one curving piece, but clay has an interesting memory for how it has been handled, and when it necessarily shrinks – first in the initial drying and then later in the heat of the kiln – it can very easily curve more or crack apart, or both. Her damp one-piece tile fit so artfully in place, and, even allowing for shrinkage, it was nearly a certain-sure thing that it would NOT fit after a 2000+ degree firing. Too big, too oddly shaped, too site-specific.

What to do? The obvious: cut it apart thoughtfully and intentionally into true mosaic pieces which would give it the ease to round that knee curve. Let them warp and crack! We would still be able to make adjustments in how we attached the pieces in order to make it all fit in the area mapped out for it.

NB balked some because her vision was to have that tile be mind-blowingly whole. How much was she willing to risk the outcome in order to show off that skill? Did she have the time or resolve to re-make it if she failed? Or did she want the greater assurance of a successfully finished piece the first go?

There was some hand-wringing involved, such was her personal creative process, but you can see her choice, fitting like an orange suction cup around that knee, right next to the TOUCH label. This octopus is loud and proud, not hiding in the least bit, still showing off.

2 thoughts on “Thursday’s Tile: Help, There’s an Octopus on My Knee!”