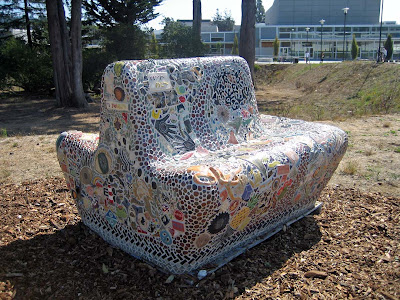 What you’re seeing in the photo above is the result of a powerful public art odyssey. It’s a free-form handmade mosaic bench that I ended up coordinating the tile work for. I am so thrilled to see it in position to be permanently installed in the new Visual and Performing Arts Complex at Cabrillo College in Aptos, CA, that all the descriptions of its making and meaning want to come tumbling out of me together.

What if I start with the inscription tile: “Come to our 5 Senses Bench, Created by over 375 students and staff of Cabrillo College between 2003 and 2007.” 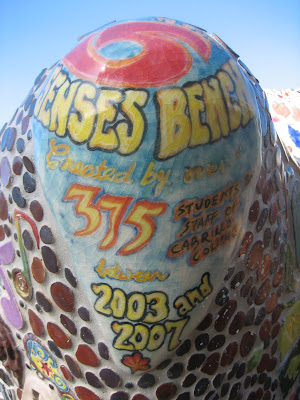 Yes, you read right: 375+ artists contributed to this major oeuvre! And yes, it took four years to complete. And yes, it took 2+ years to move it to its ultimate site this week. Gather close, kiddies, and I’ll tell you the tale.

Early Years: Inspiration/Collaboration
In the Spring Semester of 2003, Sculpture instructor Jamie Abbott and Ceramics instructor Kathryn McBride cooked up a plan for their students to design, build and make tiles for what was originally a three-piece bench grouping with the theme of The Five Senses. The framework and smooth coating for one main part was what actually got built by the Sculpture students and then passed to Ceramics students. 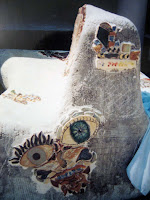 The semester ended soon after, and this gray baby elephant of a bench still needed lots of continuing effort to design, make, glaze, fire and attach tiles, not to mention to sort, store and edit the tiles in all stages of completion. Many a summer work party that year spent most of its time attempting to define and refine the Five Senses theme and to reconcile specific tile images and shapes with the curves of the bench surface. The project seem to loom larger and become more complicated the more it was worked on.

In time, the original bench enthusiasts took different classes, graduated, transferred to other schools, got jobs, moved on. Work on The Bench languished. By 2005 the tarp we had carefully kept over it had gone away and the palette it sat on was showing signs of sagging. The work “parties” had dwindled to me and Kathryn applying a tile or two and wringing our hands over the vastness and confusion of it all. Here’s an early shot in which the bench looks more like the granite expansiveness of Half Dome and the tiles look like lichen growths.

Car Crash Epiphany
This is where the plot takes an unexpected turn, pun intended. One early morning in July, 2005, my 20-year-old son Roger crashed our Honda Civic sideways into a tree on Highway 1 near downtown Santa Cruz. No drugs or alcohol, just a bit too much downhill speed, some faulty brake work done only a day or two before, and a lot of OC donut spinning because of losing traction crossing the railroad tracks. He was mildly scratched; the car was clearly totaled. Gives me the willies to think of it even now because there was a bit of a Sleeping-Beauty-pricks-her-finger-on-a-spindle curse fulfillment surrounding that crash. Sleeping Beauty did not die, because the original spell was amended, she just fell into a deep sleep…and Roger just got a wake up call from the Universe.

And so did I. I was moved to eliminate all extraneous activities from my life. The idle-chatter coffees, the stray civic involvements, the leftover obligations: all gone! I told Kathryn I only wanted to do what had the most heart for me: ceramics and finishing that bench. She said yes! and thereby graciously provided the conduit to the willing hands of her three classes of students for what turned out to be a couple of years.

The Middle Mash-Up Years
Over the next four semesters I introduced the bench project to 13 Beginning Handbuilding Ceramics classes and invited enthusiastic students to brainstorm image ideas and to make tiles for each of the Five Senses. The inventiveness of such a large, changing group of all ages and sensibilities contributed mightily to the wonderful wildness evident in the whole piece. There are stories to go with each one. Some of them I know: that realistic cigarette in the Smell area? The maker, a former smoker, told me he would always know where his last smoke was. 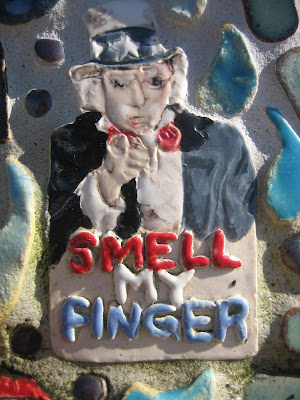 This one, also from the Smell section, is by a repeat ceramic student who prided herself on having a tile in each Sense, all involving fingers. And it was only after her hand image tile was placed in Touch did we all discover it had six fingers!

While the first crowds worked, I set about clarifying the imagery on the bench and found myself reluctantly chipping off and patching up some irrelevant and damaged tiles from the very early time when we were applying every tile we could get our hands on regardless of whether it served the overall themes in any way. Man, I hated creating MORE gray places to fill, but I can send up a silent thank you prayer for that now as it completely aided in the clarification of the project.

Bringing it Into the Station
After all those semesters of massive tile production by so many willing hands, including addressing the dividers between the Senses areas (what I call the River Tiles) and groveling around on our sides tiling the bottom edge in what I think is a rather orderly and upholstery-like border, it finally seemed to be getting covered. There were more tiles than grayness!

In the final semester, a whole new level of tile generation arose. Up until this point, all the tiles made fit somewhere in the correct area, but this was no longer so. What was needed now were tiles of very specific shapes and curvatures. It was also clear that in lots of places the gaps between tiles were too large, so we began to make and sprinkle in repetitive filler tiles: tiny candies for Taste, musical notes for Hearing and so on. At this point we were bringing the wet clay out to the bench and cutting and shaping all the tiles to fit a custom location, including allowing for shrinkage! The last gaps were closed by some special luster-fired tiles and finally I attached what was clearly the last one. It was grouted and sealed the week after Spring ’07 finals.

The Behemoth Stays Behind
The whole time the bench was being created, so was the grand new Visual and Performing Arts Complex. We knew we would wait for The Move, scheduled for sometime in 2008, in order to place it in the new digs somewhere. Well, moves are tough, calling up major doses of the unexpected as they do. We were 30 years in the old location and the new location was not quite done, so you might begin to imagine what came up in transition. Selecting a place for The Bench was ‘way down on the To Do list for a long, long time. Occasionally someone would ask me about it; occasionally I would go back to that part of campus, sit on it and pat it and thank it for its patience (and gather my own up again.)

But, now that The 5 Senses Bench is right here in our Art Village, around us again in our day-to-day, it is particularly fun to watch new crops of students discovering this very wild mosaic sculpture because these are the folks who never saw it under construction and never saw it sitting around, uninstalled. They are encountering it as it was always intended to be encountered: as a wondrous, marvelous, engaging, the-more-you-look-the-more-you-see piece of public art. That is so true, that I plan to post a Tile Of the Week here on the blog for awhile, to let me get to know it anew. A Tile and A Story, should keep me busy all over again.

Coda
In order to write this very l-o-n-g blog post, I have been looking at all the photos taken from the beginning in 2003 to this week. This last one, posted below, I had utterly forgotten. It’s me on the left and Kathryn’s hands holding the tool, in the first Ceramics Department Bench Work Party. We are placing the first tiles, which also happened to be mine. What I love about this photo is the group’s intensity of focus and the active working hands, because those two things symbolize the whole wonderful mess. 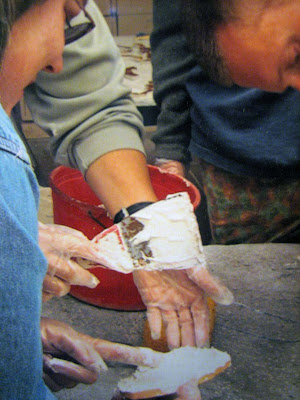 3 thoughts on “Come to Our Senses Bench: A Group Art Saga”