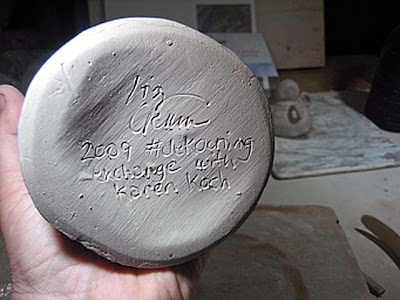 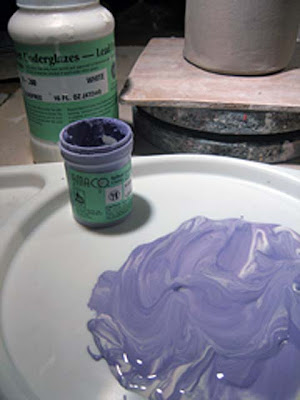 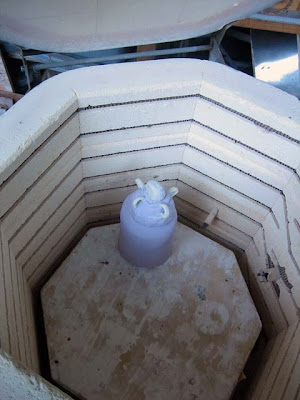 It is pretty much true for all of us with Right and Left Brains: I find I can’t talk and create at the same time. I can talk before (What’s the Plan?), on breaks (How’s it Goin’?), and afterwards (Here’s the Deal), just not during. As a matter of fact, I enjoy watching the demos of creative instructors because there is often a point where I can almost see them switch brain hemispheres and pause their verbal instructing in order to get the demo piece to the right artistic place. Makes me glow inside with recognition.

For the past week I have been in the silent During phase with the DeKooning/Rauschenberg-inspired art exchange which I am involved in with Karen Koch. (I have described the swap’s progress and premise in my previous posts of 8-17-09 , “Creative Timing” and 8-12-09 “Art Swap, What If?”) I have been quietly and happily deploying my Big Idea, step-by-achin’-step, and have been unable to make words about it. Yet, I also know I need to come up for air in order to document this fantastic experiment for me, for Karen, and for every other interested soul out there. I’m currently on a creative break, so I will recount the tale as it has unfolded so far.

As of today: the first bisque-firing is cooling down! I lifted the kiln lid and peeked and the piece made it through without self-destruction, always a positive sign. Now it can never revert to earth again, having passed the point of no return in order to become a delicious, absorbent ceramic canvas for the rest of the decorations I have planned for it. I am relieved and blessed to create another day.

So let’s take those photos up top, have ourselves a pictorial, and see what silent changes happened last week.

Top: The wet signature on the bottom of the work, a ceramic tradition. The idea is that if the piece is inscribed while it is still unfired, the artist was actually present. While there is no problem with other types of signatures being authentic, this wet signing is just one kind and I happen to prefer it. Sometimes you will see an artist’s chop/stamp pressed in the wet clay, sometimes a painted underglaze signing, all perfectly wonderful. This one includes a date and an inscription which might be the first in the world to include a Twitter hashmark address!

Middle: One thing I love to do is give a piece some color before that first bisque firing. It helps ease the stultifying transition from forming to decorating. There is so much waiting around in ceramics, it is a common problem to lose one’s stoke between the making, drying and bisque-firing steps and consequently to be neither in one’s right OR left brain when re-encountering it. I painted some amethyst and white underglazes, only partially mixed, on the whole piece. This serves as an underpainting and helps me regain my place quickly after that first firing. I chose those colors because they are common to both the pieces Karen and I traded, as she so skillfully observed.

Bottom: Off to the kiln! This morning’s photo shows the piece loaded in the kiln. And, surprise!!! It has a lid, formed from memory to recall the top of the piece I sent Karen! It has been painted with chartreuse underglaze as well as the amethyst/white mix, neither of which look at all like they will when fully fired, part of the flying-blind fun of ceramic decorating. (Oh, and don’t worry, all you energy efficiency sensates, I did not run the whole kiln with just this one piece….about 20 other works were loaded in after this shot, and they survived just fine.)

So, after today’s firing success, I am charged up and ready to do the decorating work in the coming days. Until then, I will maintain creative radio silence on this project. Over and out.