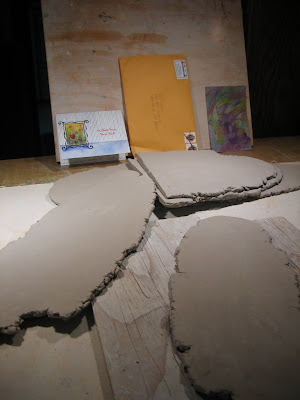 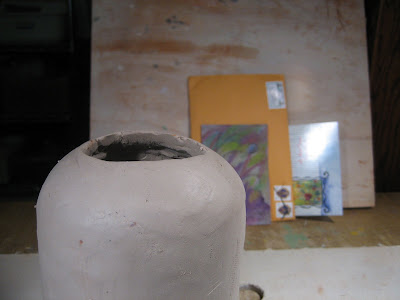 Oh, what have I done? It all started innocently with a “What if?” And that one “WI?” led to another and another, so that I presently find myself in this fun little puzzlement: How to alter the art sent to me by Karen Koch in the spirit of Robert Rauschenberg’s “Erased DeKooning?” (And I take great satisfaction knowing she has the same conundrum over the work I sent her.)

See, first it was what if I joined a book club organized by artbiz maven Alyson Stanfield on Twitter (yes, Twitter: #dekooning.) We read, more or less together, DeKooning: An American Master by Mark Stevens and Annalyn Swan. And what if one of the other readers pondered if any one of us could let our work be destroyed as in “Erased DeKooning.” And what if I tweeted that I thought I could and what if I and that other reader actually did this?

Fast forward to today: Karen and I have sent each other a piece of our work and are independently gathering our ideas about just what to do. She has blogged several times about it and you can see both works there. What I hope to record here is how I develop my response. So up top you see a photo in my studio with a bunch of slabs of a nice white porcelain-type clay called Geostone, and behind it the work (on the right) and card and envelope that Karen sent to me.

Below that photo you see what I did with those slabs today, a beginning container of some sort. I DO have a Big Idea, which I got in the shower, but I won’t spill it all out right now. Let’s just see what happens and I will make posts as I go.

What I think makes this a bit more difficult than just making OR destroying one’s own work, or even trading privately with another artist:

Goes against the creative grain a smidge. Need to stretch, though, and that is good.

Feels wrong to wreck someone else’s work, even with permission. Again, more stretching. Still feel a strong urge to honor this destruction. Make it holy, even.

This particular experiment is being done in front of an audience of sorts, as both Karen and I are posting and blogging and tweeting and emailing and showing and telling and talking to many other people about it. Although it was born in a public forum, it did not occur to me that this would be the case when we traded and created, so the watching eyes and ears add another factor. Fine, so the performance ham in me can come out and play too! It’s been awhile.

This is definitely NOT like the “Erased DeKooning” because of the two-way exchange and the fact that we were not intending to replicate that. We are more interested in seeing how it feels to let go of an end product, something we both cared enough about to not erase/edit ourselves. “What if….” is a pretty endless proposition.