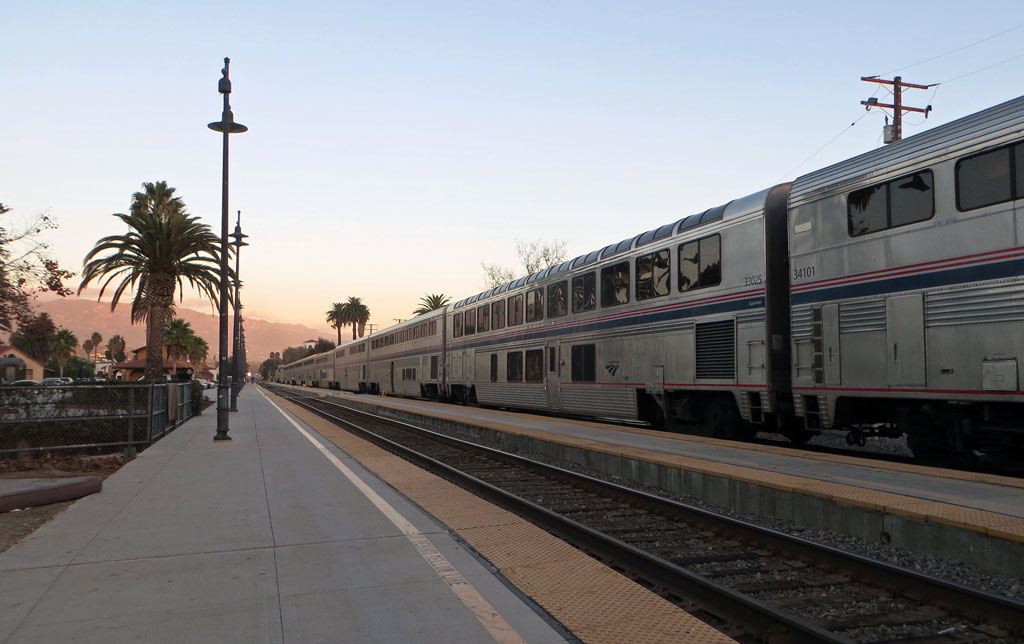 Sometimes an artist just needs to go wandering. It’s good for refreshment, perspective, inspiration. Good for body, mind, spirit. In college I took the train back to school in Santa Barbara a couple of times. It was better by far than a rideshare car, the Greyhound or a small plane. For one thing, the train is smooth and level, and for another, one can walk around. Plus that particular section of Amtrak’s Coast Starlight – San Jose to Santa Barbara – passes by always-interesting and at times spectacular, world-class countryside. So, while I have been away from the studio and exhibits this week, I have not been without a fascinating and poignant trip to stir up the juices. Here are some highlights from the journey South.

One thing that’s changed on the train since forever ago: the coaches are now set up like airplane cabins and not the glorified trolleys I rode. A center aisle is flanked with very comfortable reclining seats with full head support.  Overhead carry-on storage. Pull-down trays. And Way Better than Flying: there’s a couple of FEET of legroom with a swing out angled leg rest. There’s an Observation Lounge, a Cafe Car, and a Dining Car.  Everything is on the upper deck for better viewing. The funky vending machine car of my youth is gone. No seatbelts, which is kind of odd at first. No TSA agents! And the onboard staff was upbeat, personable and real. You felt they liked their jobs and their crewmates. As one said to me, “Pretty great office window I got, no?”

Despite those comfortable coach seats, I spent nearly the whole trip in the Observation Lounge with its huge windows and seats facing the view. What follows are some of the best shots of that day. 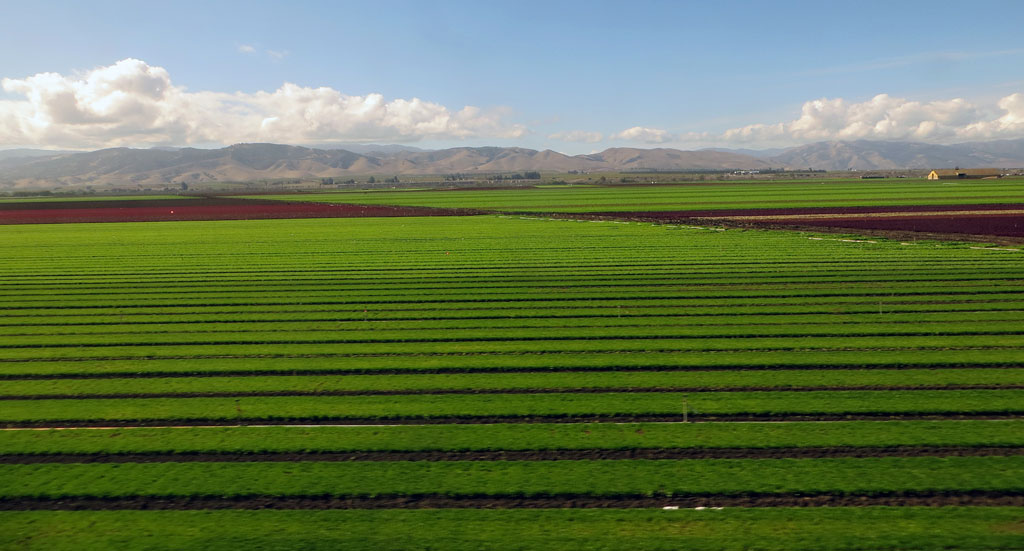 Having recently read East of Eden with my book club, I looked forward to the 105 miles of the Salinas Valley: Steinbeck Country! The first chapter of that book played in my mind as I could actually experience his description of the land. The Santa Lucia Mountains – the range of light with decorator clouds seen here – the rich river bottom agricultural land, (The Valley calls itself the Salad Bowl of the West,) and behind me, not in this shot, the Diablo Range, which the train tracks and the old two-lane I once traveled sidle up against. Fabulous pageant of greens, reds and browns, punctuated by equipment, harvesters and irrigation. 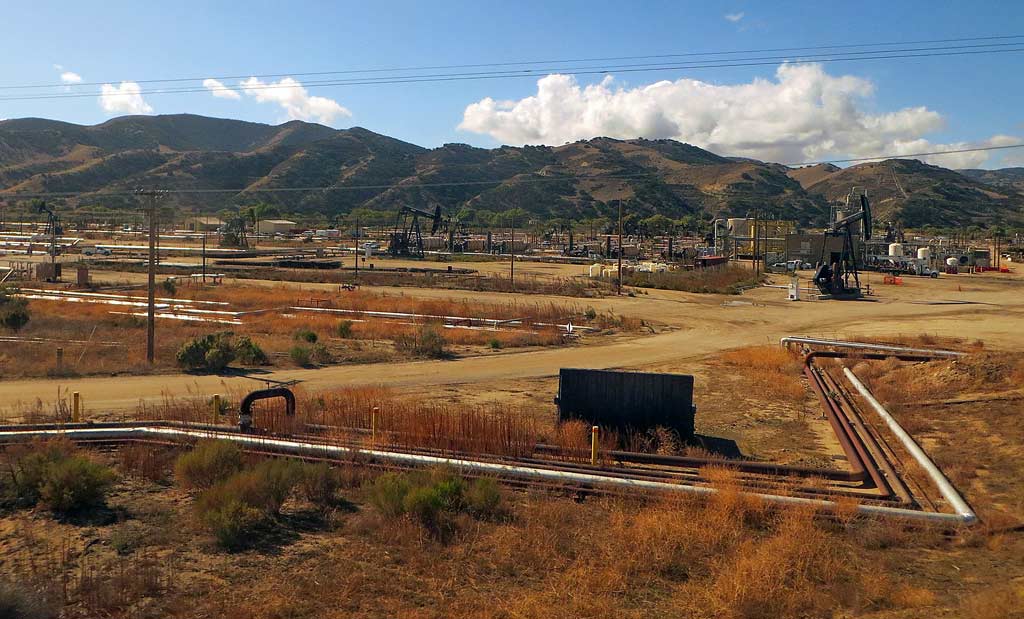 Further south in the Salinas Valley, it starts to get drier and hillier. More ranch than farm. And then there’s a surprise.  The San Ardo Oil Field is unexpected and sort of creepy. The oil well pumps seem vaguely alien and insect-like. And there are so many of them! Never saw any humans, either, which is unsettling. After all that agricultural richness, the barren machine-like array does not feel like the land is giving, but rather is being taken. 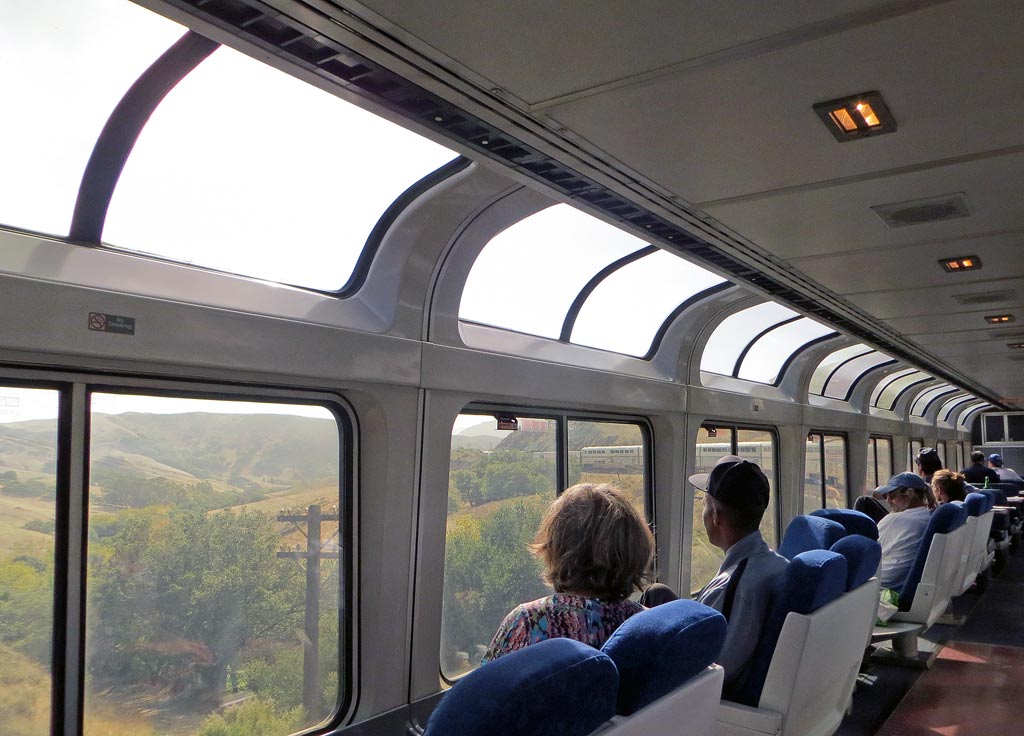 After the Salinas Valley, the train treks through several tunnels high above the dramatic 7% Cuesta Grade for cars and trucks on the other side of the canyon. It gradually snakes its way in a 1.5% grade to San Luis Obispo. This takes over 11 miles and affords views of the front and back of the line in several hairpins called the Horseshoe Curves. Here’s a view of the front from the Observation Lounge. It was amazing to see the Lounge folks look up from their phones and laptops, fall silent and take it all in. 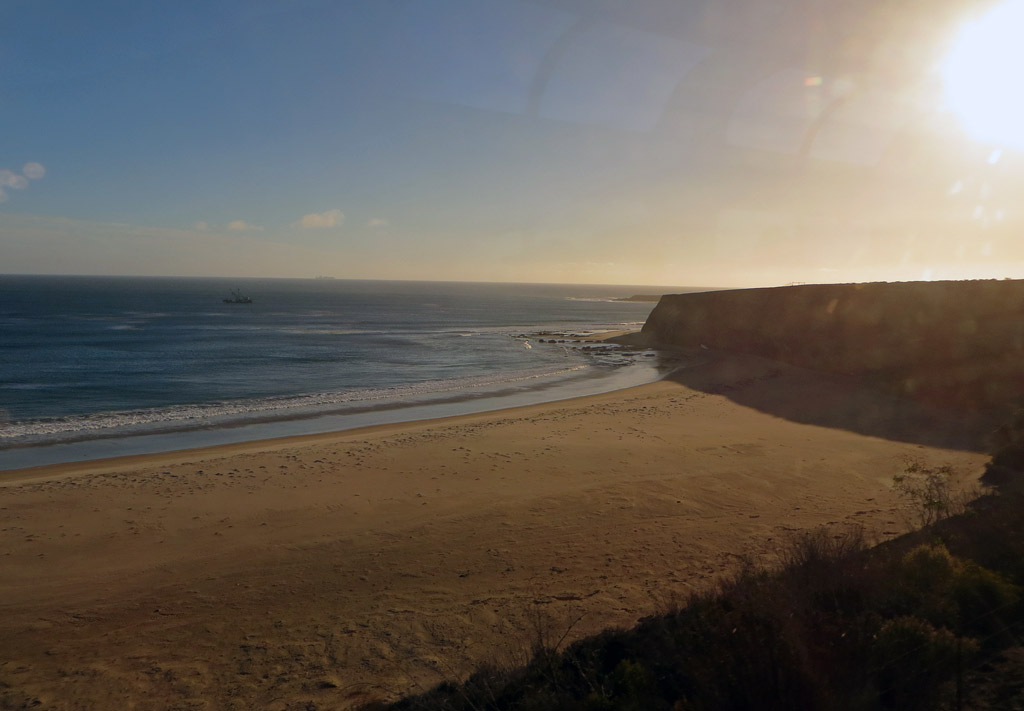 And after winding around more agriculture, inland sand dunes and tiny communities, the Coast Starlight begins its 100 mile exclusive jaunt down the coastline where the cars don’t go. Through scrub-brush barren Vandenberg AFB, with its launch pads. Past exclusive Hollister Ranch. Jalama Beach. Gaviota Pier. The tracks, still following the ocean, once again align with the freeway and I can see Storke Tower on the UCSB campus. We pull into Santa Barbara’s classic station around sunset – which is the photo up top. What a day!

–Liz Crain, who wants you to know she took her own advice from last week’s Studio Journal post to take a breather and step away from the trauma/drama.  You lovely subscribers out there did not receive that post due to distracted operator-error. (Hey, she only missed clicking ONE tiny box!!!!) It may or may not show up in this week’s subscription and if it does not, here’s the link to “Defectology and PTCS.” Don’t miss it!