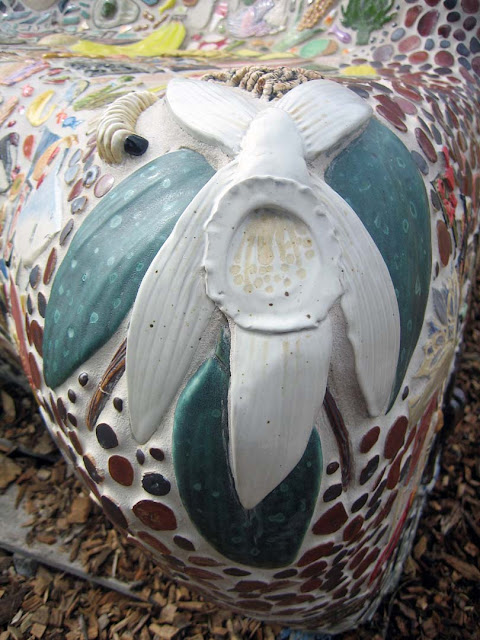 As a kid did you ever take a nip from the bottle of Vanilla Extract, quickly finding out that its alcoholic bitterness in no way resonates with its unbelievably enticing aroma? Well, I did, anyhow. Decades later I got a similar vanilla shock: vanilla beans actually come from an orchid??? Wild. Wacky. I did not know that.

When SR suggested that she fashion a Vanilla Orchid for the Taste area “knee” of the Five Senses Bench,  I thought she and her capable hands were just going to make something creamy and wonderful to solve the very real problems associated with making custom curve-specific tiles. My previous post about the Octopus tile on the Touch knee area explores these challenges and one solution in detail.

She was incommunicado for several months on this, working mostly in her own studio.  When I had nearly given up on receiving anything for the area, she happily delivered this whole lovely assembly of orchid flower, leaves and the most wonderful vanilla beans to go with. If I remember right, it was in four or five specifically overlapping pieces: another way to solve the fitting-a-curve problem.

The biggest form had curved just a tad too much in the firing, but had not cracked. And it was not too curved as to be un-attachable. We solved the installation problem by adding a fatter layer of thinset underneath each of the layers to make up the difference and protect the various points of leaves and petals. The vanilla beans were separate, so that made attaching their delicacy doable too. The whole assembly did not quite go where intended, but who’s the wiser? (Shhhh.)

The TakeAway here is about surprise endings: getting something surprisingly different than you expected: maybe shocking, maybe relevatory, maybe just exquisite and audacious and bar-raising. Thanks, SR.