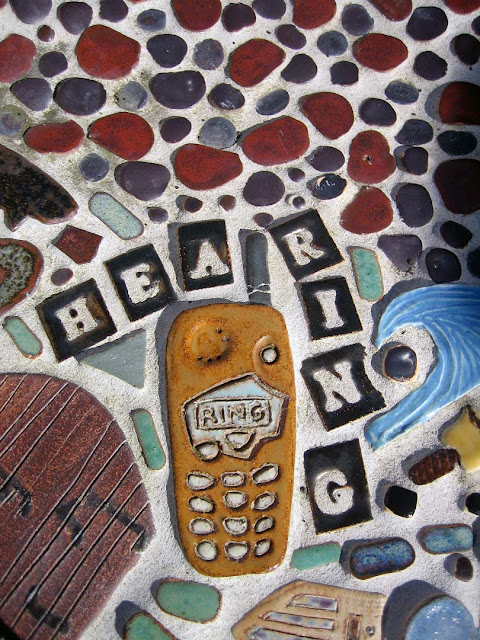 Sometimes the tiles on the Five Senses Bench were arranged on purpose (see the last Thursday’s Tile post) and sometimes they found each other. This particular arrangement is an opportunistic sight gag. It’s on the seat of the Hearing Area and includes the gold-lettered labeling tiles that were suggested for each section by the ever-dedicated bench supporter and worker,  DP. (DP, if you ever read this, know that you rock for eternity, and here’s why.)
DP has strong aesthetic and conceptual opinions and they are usually spot on. She said each area of the bench needed a word label and she even made the tiles and directed their placement. So, as a result, we have a “ringing” old school cell phone, next to the the Hearing Area title tiles, making a subtle visual ring-ring line-up, for those who noticed it. (And for those who didn’t, well, you see it now because I am pointing your head at it.)
This placement is funny because, first off, do cell phones even *RING* anymore, as in One RingyDingy? All the electronic beeps and tweets and downloaded ringtones suggest they do not. Any sound can be a cellphone’s alert now. We know that squawking parrot is just a cute call coming in and do not stir ourselves to find the wayward birdie.
Back in the day (five years ago) cell phones pretty much all warbled annoyingly. Yes, we call it ringing (just like we call it dialing) but it decidedly is not. That’s how old this cell phone tile is. And it does not even fold up or access the internet. Even has a broken antenna. Dang. Funny.
How OLD is that cell phone, you ask? So old, it has “RING” on it’s screen, fergoshsakes, spelling out its possible sound and not its GPS locationor your horoscope, or even that old Seinfeld episode.
HOW OLD? So old it only has the standard issue buttons and not a pantheon of things to press or swipe a finger across. And it isn’t hot pink and we know it can’t even take a photo.
OK, enough with the jokes at an old cell phone tile’s expense. There is another phone in Hearing: a super-super-super-old black one with a dial and a heavy receiver and cord….its sound is only inferred, not spelled out. We know for sure it could be nothing but a phone.
What is clear is that after an unspecified time, all these early 21st century objects will become like that corded dial phone: vintage and collectible and even Artsy. This old Can-You-Hear-Me-Now-Era cell phone is really only ahead of its time, and, as it sits permanently attached to the Hearing Area of the Five Senses Bench, it will attain a certain appeal and beauty all of its own. And we sense, too, that the ring-ring sight gag will continue to age well and provide its secret giggle, just as DP knew it would.
Share this:
Categories: Community, Studio Journal
Subscribe to Studio Journal:
Search
Recent Posts
Archives
Categories