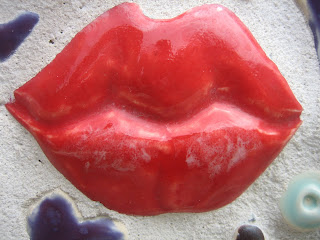 For most of the semester KB was unable to work on her ceramics assignments. She’d try to stay focused inside at her table, but most days she soon found herself outside talking to me while I worked on the Five Senses Bench. It was the perfect combination of her undeniable need to process several huge and heavy curve balls in a young life and a willing and safe non-family adult to absorb and mirror back perspective and existential hope.
Over the months, as the season turned and it was harder and harder to work outside, she revealed her tale of illness, cruelty, death and losses. I admired her intelligence and sensitivity and told her why in specific detail.
Many times we both were weeping, right there in a major campus passageway, but we would soon catch ourselves up and start laughing over our helplessness in the face of all she described.
Eventually, irony and humor began to dance with us more often than not. We made lots of other observations about people and friends, plans for the future or good food to eat and many times she’d suggest a bench tile idea or two, which, as was my practice, I immediately wrote in my Five Senses brainstorms lists.
I can’t recall if she finished that semester, probably not; but in the Spring, when she returned (to finish her Incomplete?) she added one more sweepingly magical tale of disappearance and reappearance which included all of the players from the Fall and a ceramic object she had created. I wish I could tell it to you all, but I just wouldn’t feel good doing it. The intimacy and trust she showed me still resonates.
What I can tell you is that those Cupid’s Bow lips are her lips, life-size and sculpted from life. Her tile image suggestions had a lot to do with increasing the scope of  the Touch area beyond concrete, physical touch. She wanted to see emotional touching and several tiles reflect this; even the tiny spacer tiles in this area are purple hearts for feelings.
KB’s lips are on the back of the Touch area, waiting to kiss anyone who sits there. To kiss and help feel better, to kiss and make-up, to kiss and give love. I see and feel the kisses and  I also see and feel those lips telling me a life story.
Share this:
Categories: Community, Studio Journal